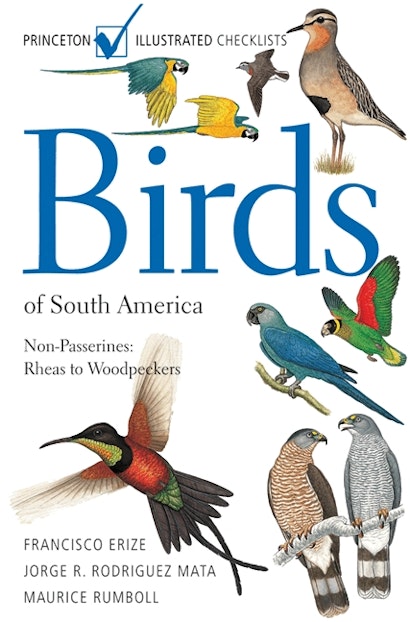 Here in an easy-to-use format is the first guide to the nearly 1,300 species of non-passerine South American birds. It complements Robert Ridgly and Guy Tudor’s large reference volumes on the passerines (1,800 species), which will soon be available in a single-volume field guide format.


One of things that makes this book special is its use of masterful and alluring illustrations; most neotropical birders will want the book for the illustrations alone. The text concentrates on the key identification features of each species and follows the layout of other books in this series. The book may be used in conjunction with regional and country field guides.


Francisco Erize is a well-known conservationist in Argentina and author or coauthor of numerous books on the wildlife of both Argentina and South America, including The National Parks of Argentina and Other Natural Areas. His photographs have appeared in hundreds of publications. Jorge R. Rodriguez Mata is a freelance artist specializing in bird illustration. His work has appeared in a number of Argentine publications, and he is currently working on a definitive guide to the country's birds. Maurice Rumboll, also based in Argentina, is an environmentalist, bird-tour leader, and freelance writer. He is coauthor of Birds of Southern South America and Antarctica (Princeton).

"Anyone with a strong interest in the birds of South America should have this book."—Frederic H. Brock, Wildlife Activist

"An excellent compilation of information that is well presented and generally accurate.... I was very pleased to see detailed coverage of large groups of confusing birds, such as the hummingbirds and the parrots, parakeets, toucans and allies.... Without question I recommend buying the book."—Geoff Carpentier, OFO News

"This handy guide complements the two larger volumes on the passerine birds previously published by S. Ridgely and Guy Tudor. It, in essence, finishes those works and now completes the avifauna of the entire South American continent. The plates are well-done and finished the bulk of the book with succinct identification remarks on the accompanied pages. For those interested in the varied birdlife of South America it is a must."—Charles E. Keller, Indiana Audubon Quarterly