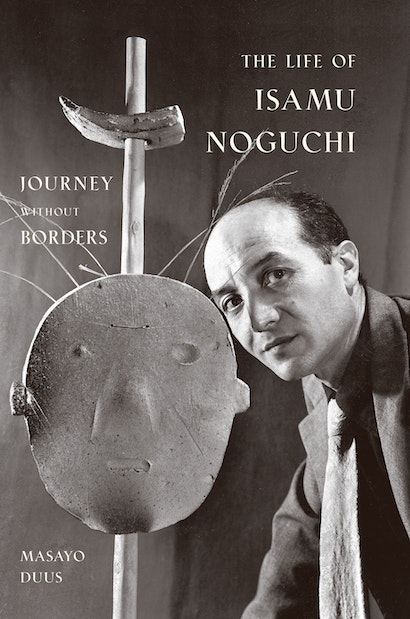 Isamu Noguchi, born in Los Angeles as the illegitimate son of an American mother and a Japanese poet father, was one of the most prolific yet enigmatic figures in the history of twentieth-century American art. Throughout his life, Noguchi (1904-1988) grappled with the ambiguity of his identity as an artist caught up in two cultures.

His personal struggles — as well as his many personal triumphs — are vividly chronicled in The Life of Isamu Noguchi, the first full-length biography of this remarkable artist. Published in connection with the centennial of the artist’s birth, the book draws on Noguchi’s letters, his reminiscences, and interviews with his friends and colleagues to cast new light on his youth, his creativity, and his relationships.

During his sixty-year career, there was hardly a genre that Noguchi failed to explore. He produced more than 2,500 works of sculpture, designed furniture, lamps, and stage sets, created dramatic public gardens all over the world, and pioneered the development of environmental art. After studying in Paris, where he befriended Alexander Calder and worked as an assistant to Constantin Brancusi, he became an ardent advocate for abstract sculpture.

Noguchi’s private life was no less passionate than his artistic career. The book describes his romances with many women, among them the dancer Ruth Page, the painter Frida Kahlo, and the writer Anaïs Nin.

Despite his fame, Noguchi always felt himself an outsider. “With my double nationality and my double upbringing, where was my home?” he once wrote. “Where were my affections? Where my identity?” Never entirely comfortable in the New York art world, he inevitably returned to his father’s homeland, where he had spent a troubled childhood. This prize-winning biography, first published in Japanese, traces Isamu Noguchi’s lifelong journey across these artistic and cultural borders in search of his personal identity.

Masayo Duus, a prize-winning author in Japan, has lived in the United States since 1964 and has written widely on the history of Japanese Americans. Among her other works translated into English are Tokyo Rose: Orphan of the Pacific, Unlikely Liberators: The Men of the 100th and 442nd, and The Japanese Conspiracy: The Oahu Sugar Strike of 1920. Peter Duus is Emeritus Professor of History at Stanford University. His most recent book is The Japanese Discovery of America.

"One artist who succeeded brilliantly in absorbing Asian and Western influences was American sculptor and designer Isamu Noguchi. . . . One of the many merits of Masayo Duus's biography of Noguchi is her lively treatment of Noguchi's estranged father, Yonejiro (Yone") Noguchi. . . . Whatever one makes of his poetry, Yonejiro was a pioneer in expressing his Japanese sensibility in a Western medium. . . . [Isamu] Noguchi pared his vision down to a basic sensuality, which owed something to Brancusi and European modernism, and something to Japanese traditional craftsmanship, but mostly to his own extraordinary talent and sensibility, which allowed him to find warm life in the hardest stones."—Ian Buruma, New York Review of Books

"Masayo Duus's Life is well considered and never merely effusive. . . . Noguchi was a consummate professional who excelled at whatever he undertook. . . . [He] was forever a Japanese-American. This was a source of energy, and perseverance, and an ambition that never faltered. But it was not a source of serenity."—John Russell, Times Literary Supplement

"Noguchi believed that 'my longing for affiliation has been the source of my creativity.' This is something that his biographer, Masayo Duus, also knows, and she has here most persuasively presented the interpretation that Noguchi would most have endorsed. The amount of material in her book is prodigious."—Donald Richie, Times Higher Education Supplement

"Masayo Duus . . . has very persuasively presented the interpretation that Noguchi himself would most have endorsed. The amount of material given is prodigious and her labors must have been enormous."—Donald Richie, Japan Times

"[A] magisterial biography, based on archival research, thorough readings, and extensive interviews with almost 200 individuals. . . . Duus seems to have ferreted out every piece of data on Noguchi's life and placed it in streams of accessible and fascinating reading, populated with major personalities of the time. . . . Noguchi's work is placed sensitively in the context of his life and times."—Choice

"Masayo Duss's recent biography of the artist is a refreshing change of pace. Duus highlights the diversity of Noguchi's life and artistic experience while refraining, for the most part, from pigeonholing him as an artist whose work reflects an essentially Japanese aesthetic. . . . [S]he seems to think . . . that Noguchi's unwavering commitment to artistic experimentation and a diversity of viewpoints and his unwillingness to be pinned down as an artist are what make his work and his life so compelling."—Amy Lyford, Art Journal

"This biography is a significant contribution to the literature on the life of Isamu Noguchi. With its presentation of many previously unknown biographical details, it will be a useful source for scholars working on Noguchi as well as for the general reader."—Bruce Altshuler, director of the Program in Museum Studies at New York University and former director of the Isamu Noguchi Garden Museum