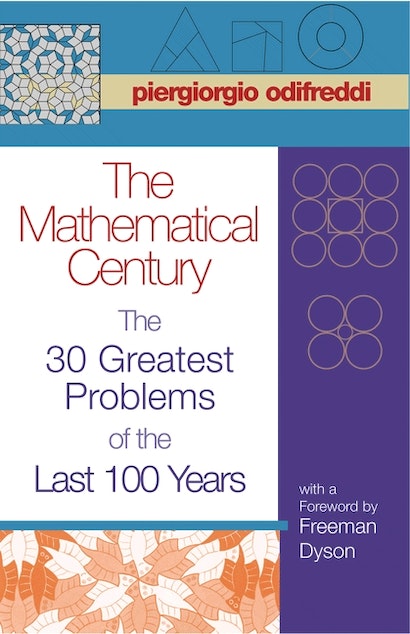 The twentieth century was a time of unprecedented development in mathematics, as well as in all sciences: more theorems were proved and results found in a hundred years than in all of previous history. In The Mathematical Century, Piergiorgio Odifreddi distills this unwieldy mass of knowledge into a fascinating and authoritative overview of the subject. He concentrates on thirty highlights of pure and applied mathematics. Each tells the story of an exciting problem, from its historical origins to its modern solution, in lively prose free of technical details.

Odifreddi opens by discussing the four main philosophical foundations of mathematics of the nineteenth century and ends by describing the four most important open mathematical problems of the twenty-first century. In presenting the thirty problems at the heart of the book he devotes equal attention to pure and applied mathematics, with applications ranging from physics and computer science to biology and economics. Special attention is dedicated to the famous “23 problems” outlined by David Hilbert in his address to the International Congress of Mathematicians in 1900 as a research program for the new century, and to the work of the winners of the Fields Medal, the equivalent of a Nobel prize in mathematics.

This eminently readable book will be treasured not only by students and their teachers but also by all those who seek to make sense of the elusive macrocosm of twentieth-century mathematics.

Piergiorgio Odifreddi is Professor of Mathematical Logic at the University of Turin and has been a visiting professor at Cornell University for many years. He is the author of the textbook Classical Recursion Theory. He is also a regular contributor to the Italian daily La Repubblica. Freeman Dyson, Professor Emeritus of Physics at the Institute for Advanced Study, is the author of several books, including Disturbing the Universe.

"Odifreddi's overview is of course a personal one, but it is hard to argue with either his choices or his organization. This is a perfect handle on an otherwise bewildering proliferation of ideas."—Ben Longstaff, New Scientist

"Odifreddi clearly and concisely describes important 20th-century developments in pure and applied mathematics. . . . Unlike similar volumes, this book keeps descriptions general and contains a short section on the philosophical foundations of mathematics to help non-mathematicians easily navigate the material."—Library Journal

"This is an astonishingly readable, succinct, and wonderful account of twentieth-century mathematics! It is a great book for mathematics majors, students in liberal-arts courses in mathematics, and the general public. I am amazed at how easily the author has set out the achievements in a broad array of mathematical fields. The writing appears effortless."—Paul Campbell, Mathematics Magazine

"Piergiogio Odifreddi's book successfully portrays the major developments in 20th century mathematics by an examination of the mathematical problems that have gained prominence during the past 100 years. . . . [T]he literary style is such that the contents are made accessible to a very wide readership, but with no hint of oversimplification."—P.N. Ruane, MathDL

"Odifreddi . . . has an engaging and effective style and a knack for compact but comprehensible summaries, making his presentation seem effortless. The Mathematical Century can be dabbled in, read through, or perhaps even used as a quick reference."—Danny Yee, Danny Reviews

"The Mathematical Century is both popular and scholarly. Piergiorgio Odifreddi clearly and accurately covers many important mathematical problems and the contributions that leading mathematicians have made to their solutions. Offering a personal but very balanced perspective, his book is one that amateur and professional alike can learn from."—Sir Michael Atiyah, Fields Medalist 1966, and former President of the Royal Society

"Piergiorgio Odifreddi has done a superb job, telling the story of twentieth-century mathematics in one short and readable volume."—Freeman Dyson, Institute for Advanced Study, Princeton

"Odifreddi's book successfully portrays the major developments in 20th century mathematics by an examination of the mathematical problems that have gained prominence during the past 100 years. . . . [It] comes very near to being that intangible entity—a history of modern mathematics. Moreover, the literary style is such that the contents are made accessible to a very wide readership, but with no hint of oversimplification."—P.N. Ruane, MAA Online