An entertaining and enlightening history of irrational numbers, from ancient Greece to the twenty-first century 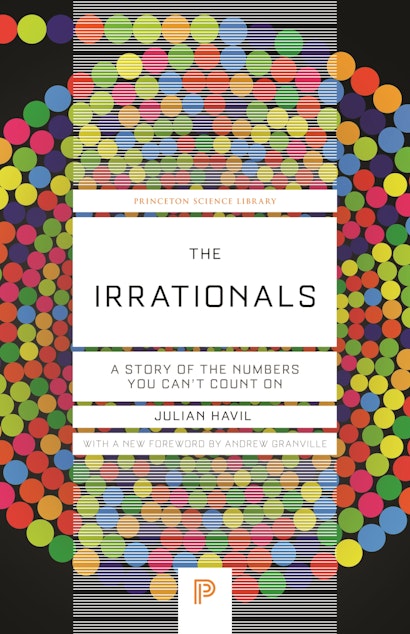 The ancient Greeks discovered them, but it wasn’t until the nineteenth century that irrational numbers were properly understood and rigorously defined, and even today not all their mysteries have been revealed. In The Irrationals, the first popular and comprehensive book on the subject, Julian Havil tells the story of irrational numbers and the mathematicians who have tackled their challenges, from antiquity to the twenty-first century. Along the way, he explains why irrational numbers are surprisingly difficult to define—and why so many questions still surround them. Fascinating and illuminating, this is a book for everyone who loves math and the history behind it.

Julian Havil is the author of Gamma: Exploring Euler's Constant, Nonplussed!: Mathematical Proof of Implausible Ideas, Impossible?: Surprising Solutions to Counterintuitive Conundrums, and John Napier: Life, Logarithms, and Legacy (all Princeton). He is a retired former master at Winchester College, England, where he taught mathematics for more than three decades.

"The insides of this book are as clever and compelling as the subtitle on the cover. Havil, a retired former master at Winchester College in England, where he taught math for decades, takes readers on a history of irrational numbers—numbers, like v2 or p, whose decimal expansion 'is neither finite nor recurring.' We start in ancient Greece with Pythagoras, whose thinking most likely helped to set the path toward the discovery of irrational numbers, and continue to the present day, pausing to ponder such questions as, 'Is the decimal expansion of an irrational number random?'"—Anna Kuchment, Scientific American

"The Irrationals is a true mathematician's and historian's delight."—Robert Schaefer, New York Journal of Books

"From its lively introduction straight through to a rousing finish this is a book which can be browsed for its collection of interesting facts or studied carefully by anyone with an interest in numbers and their history. . . . This is a wonderful book which should appeal to a broad audience. Its level of difficulty ranges nicely from ideas accessible to high school students to some very deep mathematics. Highly recommended!"—Richard Wilders, MAA Reviews

"It is a book that can be warmly recommended to any mathematician or any reader who is generally interested in mathematics. One should be prepared to read some of the proofs. Skipping all the proofs would do injustice to the concept, leaving just a skinny skeleton, but skipping some of the most advanced ones is acceptable. The style, the well documented historical context and quotations mixed with references to modern situations make it a wonderful read."—A. Bultheel, European Mathematical Society

"To follow the mathematical sections of the book, the reader should have at least a second-year undergraduate mathematical background, as the author does not shrink from providing some detailed arguments. However, the presentation of historical material is given in modern mathematical form. Many readers will encounter unfamiliar and surprising material in this field in which much remains to be explored."—E. J. Barbeau, Mathematical Reviews Clippings

"This is a well-written book to which senior high school students who do not intend to study mathematics at university should be exposed in their last two years at school. The ideas are challenging and provocative, with numerous clear diagrams. The topics are presented with numerous examples, and unobtrusive humour which renders the exposition even more palatable. The book would be an ideal source of ideas in a mathematics course within a liberal arts college because it links not only with the historical source of mathematics problems, but also with some of the great ideas of philosophy."—A. G. Shannon, Notes on Number Theory and Discrete Mathematics

"Readers will be swept away by Havil's command of the subject and his wonderful writing style. The Irrationals is a lot of fun."—Robert Gross, coauthor of Fearless Symmetry: Exposing the Hidden Patterns of Numbers and Elliptic Tales: Curves, Counting, and Number Theory