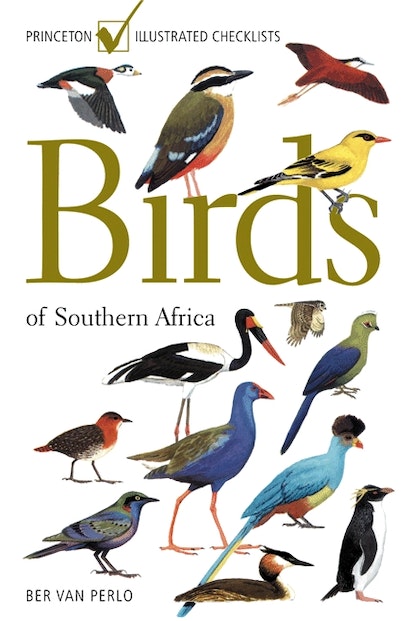 Birds of Southern Africa surpasses other field guides to the region by illustrating and describing all 1,250 bird species of South Africa, Zambia, Malawi, Namibia, Lesotho, Swaziland, Botswana, Mozambique, and Zimbabwe. In addition, this is the only guide to illustrate the birds of Angola (including Cabinda), whose river basins and rocky hillsides are home to the striking White-headed Robin Chat and the Angolan Cave Chat. The 84 color plates group similar species and subspecies and also depict vagrants and ocean wanderers that appear in this huge region characterized by widely varying habitats, from woodlands and forests to deserts to swamps. The text directly opposite the plates concisely describes each bird’s habitat and key physical, behavioral, and vocal characteristics. All the larks are shown perching as well as in flight, and every swallow is pictured in flight from below. The most distinctive immature and nonbreeding plumages are included, and distribution maps show the range and frequency of each species. This is an essential guide for any birder contemplating a trip to southern Africa.

Ber van Perlo has been traveling and living in Africa since 1981. He is the award-winning author and illustrator of Birds of East Africa, Birds of Western and Central Africa, and Birds of Mexico and Central America (all Princeton).

"Africa can be the birding destination of a lifetime, and with the comprehensive and detailed Birds of Southern Africa, any birder can feel well prepared for the diverse avifauna they will encounter no matter where they may be visiting in the region."—Melissa Hayntz, About.com Birding

Praise for Princeton's previous edition: "If you are headed to southern Africa for the first time, you can put this in your pocket and take it into the field, and it will give you an excellent overview."—Stuart Keith, Birding