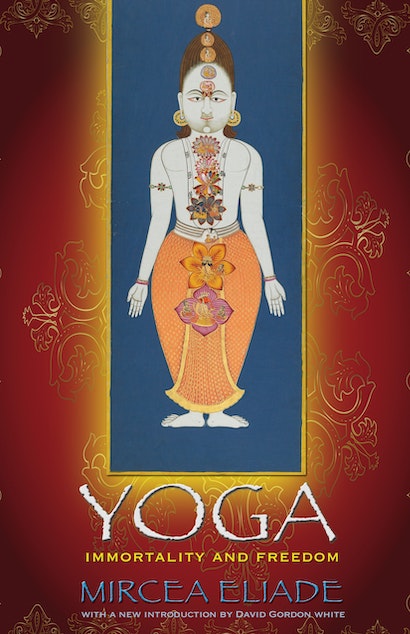 In this landmark book, first published in English in 1958, renowned scholar of religion Mircea Eliade lays the groundwork for a Western understanding of Yoga. Drawing on years of study and experience in India, Eliade provides a comprehensive survey of Yoga in theory and practice from its earliest antecedents in the Vedas through the twentieth century.

A new introduction by David Gordon White provides invaluable insight into Eliade’s life and work, highlighting the key moments in Eliade’s academic and spiritual education, as well as the personal experiences that shaped his worldview. Yoga is not only one of Eliade’s most important books, it is also his most personal — the only one to analyze a religious tradition that he had truly lived.

Mircea Eliade (1907-1986), a native of Romania, was for many years the Sewell L. Avery Distinguished Service Professor of the History of Religion at the University of Chicago. His many books include The Myth of the Eternal Return, The Sacred and the Profane, and Shamanism (all Princeton).

"Praise for Princeton's previous editions: "[Yoga: Immortality and Freedom] states with clarity and precision what the beliefs and practices of yoga are, and how they originated from the primeval Indic religions.""—New Yorker

"Praise for Princeton's previous editions: "[M]any of the scholars who have laboured to translate or interpret the Eastern scriptures have been handicapped by their own prejudices and preconceptions. . . . Eliade is emphatically not one of them.""—Times Literary Supplement

"Praise for Princeton's previous editions: "[T]he best single book on yoga. . . . As a young man, [Eliade] lived for years in India practising authentic yoga and experienced all its phenomena, but he was in addition a master of all the relevant texts in the original Sanskrit, and his book is unrivalled for its scholarship.""—Robert Temple, Spectator

"Praise for Princeton's previous editions: "There has rarely been a book in English which treats the mental discipline of Yoga in such exhaustive detail. . . . [A] work that is likely to remain standard for many years to come.""—Herbert Cahoon, Library Journal

"This is . . . a book that will . . . whet the appetite of your intellect. It also offers the reader so much more insight into the tenets of yoga than the multitude of self-help books on meditation and how-to-do-yoga will ever give. In Yoga: Immortality and Freedom, Eliade analyzes in detail a religion and tradition that for years was his lifestyle. Get ready for some massive reading."—Minna Forsell, Metaspychology Online Reviews