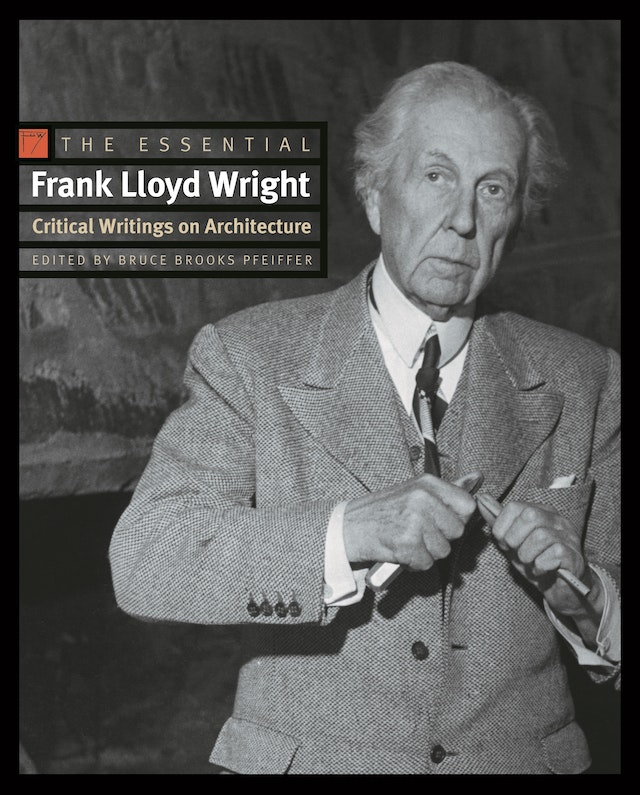 He was the most iconoclastic of architects, and at the height of his career his output of writings about architecture was as prolific and visionary as his architecture itself. Frank Lloyd Wright pioneered a bold new kind of architecture, one in which the spirit of modern man truly “lived in his buildings.” The Essential Frank Lloyd Wright is a one-volume compendium of Wright’s most critically important — and personally revealing — writings on every conceivable aspect of his craft.

Wright was perhaps the most influential and inspired architect of the twentieth century, and this is the only book that gathers all of his most significant essays, lectures, and articles on architecture. Bruce Pfeiffer includes each piece in its entirety to present the architect’s writings as he originally intended them. Beginning early in Wright’s career with “The Art and Craft of the Machine” in 1901, the book follows major themes through The Disappearing City, The Natural House, and many other writings, and ends with A Testament in 1957, published two years before his death. This volume is beautifully illustrated with original drawings and photographs, and is complemented by Pfeiffer’s general introduction, which provides history and context. The Essential Frank Lloyd Wright is a must-have resource for architects and scholars and a delight for general readers.

"Bruce Brooks Pfeiffer is a living link to Wright himself and has performed an important service by publishing books of letters, photographs, and drawings which bring us closer to the architect's world, creative process, personal life and literary sources. The Essential Frank Lloyd Wright . . . is a well-designed anthology."—William J. R. Curtis, Times Literary Supplement

"[T]his valuable record of Wright's words forms a welcome addition to the three key accounts of his designs that appeared at the end of the 20th century. . . . Heartily recommended."—Peter Kaufman, Library Journal

"[A] reproduction of the original publication of Modem Architecture, handsome to hold and read, and additionally valuable for its enlightening new introduction by Wright scholar Neil Levine of Harvard University. . . . The Essential Wright is essential reading."—Barrymore Laurence Scherer, Antiques

"[T]he book is inspiring and presents a very good recompilation of the life work one of the most important architects of the twentieth century that was also very concerned with organic architecture and conservation of the natural environment. In addition, this hardbound book is made of high quality materials, it is well written, and it is a must-have resource for architects and scholars."—Martha Patricia Niño, Leonardo Reviews

"Perhaps some people think you can have too many books on Frank Lloyd Wright, but I believe there's always room for more. This year, it's a scholarly duo from Princeton University Press: The Essential Frank Lloyd Wright: Critical Writings on Architecture, edited by Wright scholar Bruce Brooks Pfeiffer (453 pages, $49.95) and the essential Modern Architecture: Being the Kahn Lectures for 1930, with a new introduction by Neil Levine (115 pages, $29.95)."—Mary Chandler, Rocky Mountain News