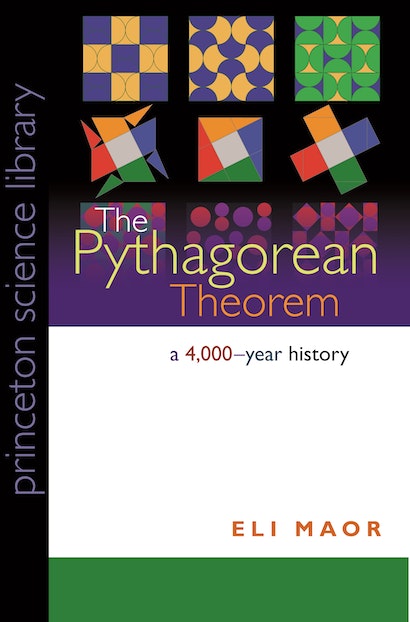 By any measure, the Pythagorean theorem is the most famous statement in all of mathematics. In this book, Eli Maor reveals the full story of this ubiquitous geometric theorem. Maor shows that the theorem, although attributed to Pythagoras, was known to the Babylonians more than a thousand years earlier. Pythagoras may have been the first to prove it, but his proof — if indeed he had one — is lost to us. The theorem itself, however, is central to almost every branch of science, pure or applied. Maor brings to life many of the characters that played a role in the development of the Pythagorean theorem, providing a fascinating backdrop to perhaps our oldest enduring mathematical legacy.

Eli Maor is the author of Venus in Transit, Trigonometric Delights, To Infinity and Beyond, and e: The Story of a Number (all Princeton). He teaches the history of mathematics at Loyola University in Chicago and at the Graham School of General Education at the University of Chicago.

"This excellent biography of the theorem is like a history of thought written in lines and circles, moving from ancient clay tablets to Einstein's blackboards. . . . There is something intoxicating about seeing one truth revealed in so many ways. It all makes for hours of glorious mathematical distraction."—Ben Longstaff, New Scientist

"[The Pythagorean Theorem] is aimed at the reader with an interest in the history of mathematics. It should also appeal to most well-educated people...It is a story based on a theme and guided by a timeline...As a popular account of important ideas and their development, the book should be read by anyone with a good education. It deserves to succeed."—Peter M. Neumann, Times Higher Education Supplement

"Based on this recent book, Maor just keeps getting better. Already recognized for his excellent books on infinity, the number e, and trigonometry, Maor offers this new work as a comprehensive overview of the Pythagorean Theorem...If one has never read a book by Eli Maor, this book is a great place to start."—J. Johnson, Choice

"Maor expertly tells the story of how this simple theorem known to schoolchildren is part and parcel of much of mathematics itself. . . . Even mathematically savvy readers will gain insights into the inner workings and beauty of mathematics."—Amy Shell-Gellasch, MAA Reviews

"Maor's book is a concise history of the Pythagorean theorem, including the mathematicians, cultures, and people influenced by it. The work is well written and supported by several proofs and exampled from Chinese, Arabic, and European sources the document how these unique cultures came to understand and apply the Pythagorean theorem. [The book] provides thoughtful commentary on the historical connections this fascinating theorem has to many cultures and people."—Michael C. Fish, Mathematics Teacher

"This book will make for good supplementary reading for high school students, high school teachers, and those with a general interest in mathematics. . . . The author's enthusiasm for his subject is evident throughout the book."—James J. Tattersull, Mathematical Reviews

"This book goes beyond the theorem and its proofs to set it beautifully in the context of its time and subsequent history."—Eric S. Rosenthal, Mathematics Magazine

"This is an excellent book on the history of the Pythagorean Theorem. . . . This book is suitable to any student who has basic knowledge of calculus but the layperson will also find it interesting. . . . Maor has an exceptional method of writing very technical mathematics in a seamlessly way."—Kuldeep, Mathematics and My Diary

"All in all, this affordable book, as with Maor's previous titles, is rollicking good fun and highly recommended to anyone with even the slightest interest in the history of mathematics."—Francis A, Grabowski, European Legacy

"Eli Maor has brought four thousand years of history back to life, all based on the Pythagorean theorem but still giving the times a distinctly human look. This book is designed for readers who are inspired, or who want to be inspired, by the numbers that Eli uses to tell his story. Readers will learn about the mathematics of the time, but more important, they will understand the people and the ideas of that period. A monumental effort."—David H. Levy, National Sharing the Sky Foundation

"There's a lot more to the Pythagorean theorem than a² + b² = c², and you'll find it all in Eli Maor's new book. Destined to become a classic, this book is written with Maor's usual high level of skill, scholarship, and attention to detail. He's also got a sense of humor that will please a range of readers. As we used to say in the 1950s, 'Miss it and be square!'"—Paul J. Nahin, author of Chases and Escapes and Dr. Euler's Fabulous Formula

"Eli Maor states that the Pythagorean theorem 'is arguably the most frequently used theorem in all of mathematics.' He then supports this claim by taking his reader on a journey from the earliest evidence of knowledge of the theorem to Einstein's theory of relativity and Wiles's proof of Fermat's last theorem, from the Babylonians around 1800 BCE to the end of the twentieth century. I think that the reader who makes the journey with Maor will be convinced beyond a reasonable doubt. He is the first author who has sifted through all the mathematics, history of mathematics, and physics books and collected for us just the material directly related to the Pythagorean theorem."—Robert W. Langer, Professor Emeritus, University of Wisconsin, Eau Claire