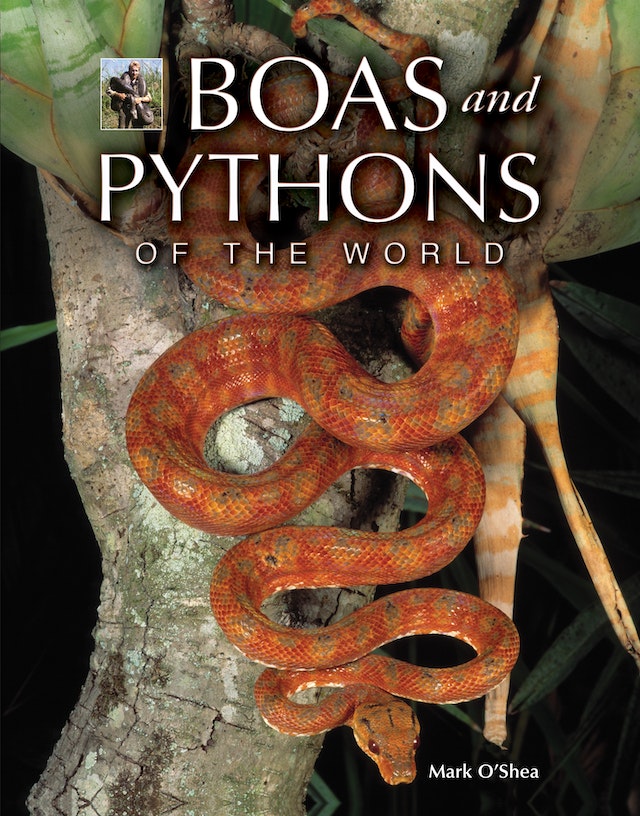 Few reptiles command more respect than the mighty boas and pythons. Prized for their size, relative docility, and spectacular coloration and patterning, they are the most dramatic snakes in the world. But the same snakes that many consider gentle giants — the Green Anaconda can exceed twelve yards in length — are also finely tuned killing machines. In Boas and Pythons of the World, renowned snake expert Mark O’Shea takes readers on an exciting continent-by-continent journey to look at these snakes in their native habitats. Stunning color photographs and intriguing stories from O’Shea’s encounters with these snakes in the wild bring these reptiles to life.

There is a tremendous variety of boas and pythons. While the largest are measured in yards, the smallest, the Javelin Sand Boa, is no longer than thirty-two inches. And they inhabit a vast range of habitats on five continents, from stony desert to lush tropical forest. In more than one hundred detailed species accounts, Boas and Pythons of the World examines snakes as different as the cryptically patterned Madagascan Ground Boa and Australasia’s beautiful Green Tree Python.

Although some of these snakes are capable of attacking and killing humans, boas and pythons are much more likely to be man’s victims. Across the world, these snakes are retreating in the face of habitat destruction, hunting, and climate change. Addressing the dire risks they face, O’Shea discusses what can be done to help save what are among our most fascinating reptiles.

Mark O'Shea, curator of reptiles at West Midland Safari Park (U.K.), has participated in more than sixty fieldwork and filming exhibitions, traveling to every continent except Antarctica. His books include the definitive Guide to the Snakes of Papua New Guinea: Reptiles and Amphibians (coauthored with Tim Halliday); and Venomous Snakes of the World (Princeton).

"Boas and Pythons of the World is quite enjoyable. Mark O'Shea is a good writer with an easy, readable style. The book contains much useful information, and the personal experiences O'Shea weaves into his accounts add a nice personal touch."—Robert C. Drewes, coauthor of Reptiles and Amphibians of East Africa