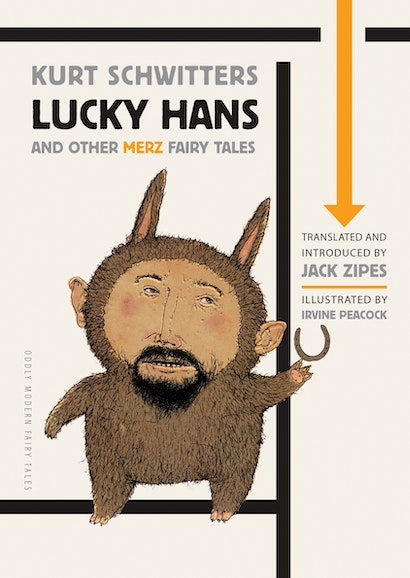 Kurt Schwitters revolutionized the art world in the 1920s with his Dadaist Merz collages, theater performances, and poetry. But at the same time he was also writing extraordinary fairy tales that were turning the genre upside down and inside out. Lucky Hans and Other Merz Fairy Tales is the first collection of these subversive, little-known stories in any language and the first time all but a few of them have appeared in English. Translated and introduced by Jack Zipes, one of the world’s leading authorities on fairy tales, this book gathers thirty-two stories written between 1925 and Schwitters’s death in 1948 — including a complete English-language recreation of The Scarecrow, a children’s book illustrated with avant-garde typography that Schwitters created with Kate Steinitz and De Stijl founder Theo van Doesburg. Lucky Hans and Other Merz Fairy Tales also includes brilliant new illustrations that evoke the 1920s, 1930s, and 1940s.

Schwitters wrote these darkly humorous, satirical, and surreal tales at a time when traditional German fairy tales were being co-opted by the Nazis. Filled with sharp critiques of German life during the Weimar and early Nazi eras, Schwitters’s tales are rich with absurdist events and insist that not everyone — and perhaps not anyone — lives happily ever after. In “Lucky Hans,” the starving protagonist tries to catch a rabbit only to have it shed its fur like a coat and run off naked into the forest. In other tales, a sarcastic gypsy stands in for a fairy godmother and an army recruit is arrested for growing to monstrous size.

Lucky Hans and Other Merz Fairy Tales is a delightfully strange and surprising book.

Jack Zipes is a leading authority on fairy tales. His translations include The Complete Fairy Tales of the Brothers Grimm and The Fairy Tales of Hermann Hesse (both Bantam). He is the editor of The Great Fairy Tale Tradition (Norton), and the author of Why Fairy Tales Stick and Hans Christian Andersen, among many other books. He is professor emeritus of German and comparative literature at the University of Minnesota.

"These byproducts from [Schwitters,] a man who tried his hand at much else, and gained relatively little attention for any of it, who lived with his parents and then in the house he inherited from them in a no-account place in Germany, and then in exile, are among the few wonderful and imperishable things of the twentieth century."—Michael Hofmann, New York Review of Books

"Jack Zipes has now usefully collected and translated a handy anthology of Schwitters short stories, written from 1918 to 1948, selecting those he considers to be 'oddly modern fairy tales.' . . . Schwitters's Merz fairy tales are lies that speak the truth."—Peter Read, Times Literary Supplement

"Mostly unpublished during Schwitters's lifetime, the tales have been rescued from oblivion by teams of eager Germanists, and selected, translated and introduced for this edition by eminent fairytale scholar Jack Zipes. The tales are accompanied by cutely sinister illustrations by Irvine Peacock."—Justin Clemens, The Australian

"Including four pieces Schwitters wrote in English—he had abandoned German, as the Nazis' language—this volume stands as a substantial, chronologically representative, and delightful addition to the still small number of texts by Schwitters published in the U.S. Zipes supplies snappy translations and a thoughtful critical introduction."—Choice

"In these absurdist parables, Schwitters's savage clowning empties the fairy tale of its easy consolations. He revisits the traditions in the melancholic, mordant voice of irony and satire, and, as with other fabulists—Voltaire, Swift, Kafka, Capek—his stories still speak to us now as freshly as when they were written, and entertain us richly."—Marina Warner, author of Phantasmagoria

"Kurt Schwitters's fairy tales can be safely read to children, without boring the parents. While children will be delightfully dreaming themselves in wondrous worlds, the parents can contemplate existential questions and take shortcuts to understanding the absurdity of war, the vacuity of power, and the vanity of wealth. Schwitters, the most childlike Dadaist, was a fierce defender of innocence and an equally fierce critic of society. His tales are well drawn paths in a magically lit moral landscape."—Andrei Codrescu, author of The Posthuman Dada Guide

"This collection of Kurt Schwitters's little-known fairy tales reveals that he was a master of literary satire in addition to being one of Weimar Germany's most prominent artists. With its elegant translations, charmingly impudent illustrations, and lively introduction, this book will earn a steady readership."—Maria Tatar, editor of The Classic Fairy Tales

"This is a very enjoyable collection of subversively humorous stories, and I found myself laughing out loud while reading them. The fairy tale served as apt material for Kurt Schwitters to play with conventions, produce nonsense within well-known plots, or wreak havoc in everyday routines, all in order to critique bourgeois values, religion, nationalism, and Nazism, and to open up the imaginations of children and adults to his artistic worldview."—Cristina Bacchilega, author of Postmodern Fairy Tales

"Schwitters's fairy tales are especially interesting because they document the vitality of experimentation in the genre that occurred in Germany in the first half of the twentieth century. While Grimms' tales were increasingly co-opted by nationalists and fascists, writers such as Schwitters sought to rewrite the genre as a form of sociopolitical resistance and cultural reformation. Translated, edited, and introduced by Jack Zipes, the world's leading expert on the fairy tale, this volume has a special value."—Donald Haase, editor of Marvels and Tales: Journal of Fairy-Tale Studies