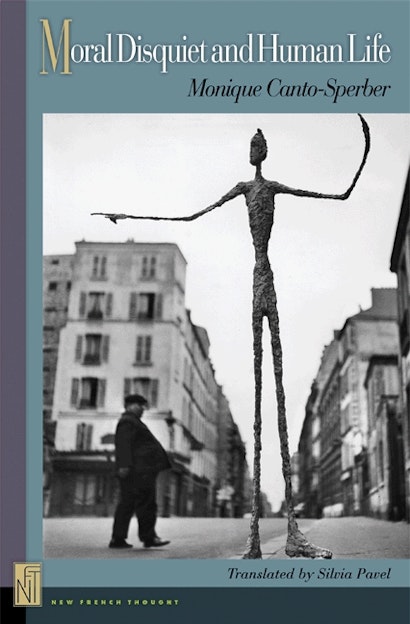 Attempting to steer moral philosophy away from abstract theorizing, Moral Disquiet and Human Life argues that moral philosophy should be a practical, rational, and argumentative engagement with reality, and that moral reflection should have direct effects on our lives and the world in which we live. Illustrating her discussion with vivid examples from literature, music, drama, and current events, the noted French philosopher Monique Canto-Sperber resumes the most ancient pursuit of philosophy: the examination of human life itself. What did Socrates mean when he said that the unexamined life is not worth living? How can reflecting on one’s existence incorporate human singularity, the contingency of events, the certainty of death, the presence of the past, or the irreversibility of time? Carefully analyzing and proposing answers to such questions, Moral Disquiet and Human Life eloquently calls for a redefinition of the task of moral philosophy and of its limits.

Monique Canto-Sperber is a philosopher and the director of the École normale supérieure in Paris. She is the author of many books on philosophy and classics, and is the editor of Le Dictionnaire d'éthique et de philosophie morale.

"[A]n extremely rich and wide-ranging work, written by one of the foremost contemporary moral philosophers in France. . . . Without at all sacrificing rigor, [Monique Canto-Sperber] demonstrates in a most resounding way that philosophy at its very best is plentiful in its resources to speak quite illuminatingly to the circumstances of life that agonize us so."—Laurence Thomas, Ethics

"Canto-Sperber not only holds up the history of moral philosophy as relevant and insightful, but she retells the grand story in her own fashion. Anglophones will find her narrative of the Ancients, her homage to the pre-Moderns (like Anselm), her 'inside story' approach to the existentialists, and her comparisons of French philosophers to non-French thinkers, both entertaining and revealing. But her incisive critique of the Enlightenment project of secularization, written in a dramatic and ever-surprising style of prose, is what makes this work unique and provocative."—Albert D. Spalding, Philosophy in Review