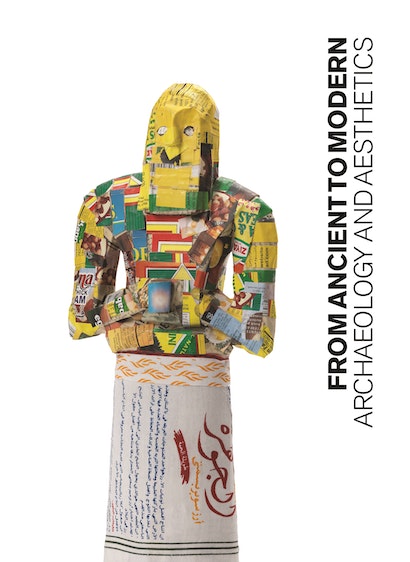 As archaeologists unearth the past, they seek meaning or purpose for the objects they uncover by looking at the objects themselves and their archaeological context. Art historians, on the other hand, primarily focus on aesthetics, asking why a particular object stimulates our senses, and what that tells us about ourselves. From Ancient to Modern offers a lens for understanding ancient objects through the perspectives and processes of both archaeology and aesthetics, and, in so doing, illuminates the multiple layers of meaning that a single object can take on—sometimes simultaneously—over the course of its existence.

This beautifully illustrated volume is the accompanying catalog for the exhibition at New York University’s Institute for the Study of the Ancient World and focuses on fifty objects from three iconic sites in the ancient Near East: Ur, Diyala, and Kish. The excavation, unique characteristics, and transformative journey of each object—from archaeological artifact to aesthetic item—are examined. Select contemporary artworks are also considered in the investigation of how ancient objects acquire meaning in the present day.

Jennifer Y. Chi is exhibitions director and chief curator at the Institute for the Study of the Ancient World at New York University. Pedro Azara is professor of aesthetics and the theory of art at the Polytechnic University of Catalonia.

"From Ancient to Modern is a fascinating contribution to the study of ancient Near Eastern art, archaeological research and restoration, museum practices, and archaeological heritage at risk. It will not only interest scholars of the ancient Near East, art historians, and museum professionals, but also students, general readers, and the museum-going public."—Karen S. Rubinson, Institute for the Study of the Ancient World at New York University

"This thought-provoking book addresses critical issues concerning how ancient objects inform our knowledge of the past as well as our present. I can't emphasize enough how crucial it is to convey to the public how precarious things are in the modern region of ancient Mesopotamia and how each object in this catalog is a miracle of survival, discovery, and interpretation. The authors of this volume are among the best in their field and their work is of the utmost importance."—Sidney Babcock, The Morgan Library and Museum