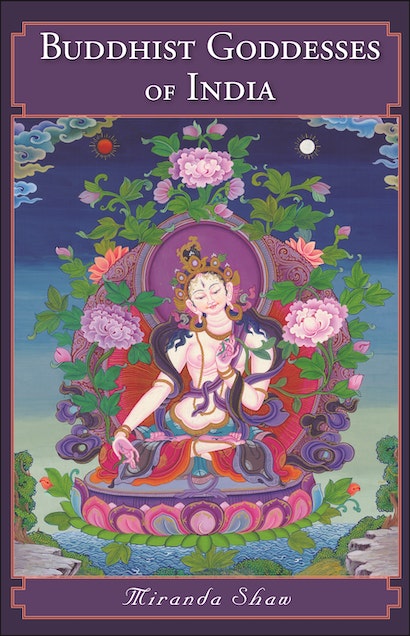 Buddhist Goddesses of India chronicles the histories, legends, and artistic portrayals of nineteen goddesses and several related human figures and texts. Beautifully illustrated and drawing on a sweeping range of material, from devotional poetry and meditation manuals to rituals and artistic images, Shaw reveals the character, powers, and practice traditions of the female divinities in this definitive and essential guide.

Miranda Shaw is associate professor of religious studies at the University of Richmond. She is the author of Passionate Enlightenment: Women in Tantric Buddhism (Princeton).

"This first comprehensive survey of Buddhist female deities fills a gap in academic treatment of the goddess role in the evolution of Buddhism. . . . Each chapter is a complete work on a single goddess and may be read independently. Highly recommended."—Library Journal

"Buddhist Goddesses of India is a wonderful contribution to the study of deities. . . . All in all, Shaw's book is a valuable resource for the scholar, the practitioner, and the student of goddess traditions. Her rich profiles provide the necessary historical, iconographic, and ritual background for us to understand the meaning and context of these goddesses, and the art she has chosen and represented with vivid colored plates . . . beautifully illustrates the variety, vitality, and power of the goddess traditions of Buddhist India."—Judith Simmer-Brown, Buddhadharma

"The theme of this fine work is best described as untangling and clarifying the complex early role and appearance of female deities found throughout the Himalayan plateau. There is a dearth of understanding of the symbolism of goddess-deity characters: figures of wisdom, healers, heavenly and earthly mothers, beautiful and powerful beings. [. . .] This is a marvelous study. Buddhist Goddesses of India serves the reader on multiple levels."—New Age Retailer

"This comprehensive study of Indian Buddhist goddesses fills a major gap in knowledge of the breadth of divine female figures in the Buddhist world. . . . Well documented, and with a fine, full bibliography, this book is beautifully and lavishly illustrated in color and black and white."—Choice

"Scholars of Buddhism who are unaware of the importance and pervasiveness of Buddhist 'goddess' traditions would be well advised to read it. It will also be of interest to graduate students, in part because of its broad coverage and helpful references."—David B. Gray, Journal of the American Academy of Religion

"Beautifully written and erudite, this book fills a need in the growing literature about goddesses in Buddhism. The goddesses are meticulously researched and brilliantly analyzed. Destined to become a classic in the field, Buddhist Goddesses of India leaves no doubt that goddesses have been central, not peripheral, to Buddhism, even from the earliest traceable beginnings of the tradition."—Susan L. Huntington, author of The Art of Ancient India

"Miranda Shaw comprehensively demonstrates the importance of the feminine divine in Buddhism. She draws together art, scripture, myth, and ritual to bring these goddesses and female Buddhas alive, producing a definitive resource for scholars of Buddhism and of women's spirituality. With her eloquent translations and scrupulous analyses, Shaw has given us a treasure of religious insight into the sacred feminine."—Patricia Monaghan, Depaul University, author of Goddess Path

"This work is a masterpiece. Shaw's fascinating study deepens our understanding of the divine feminine in South Asia. Her luminous writing carries the reader through an amazing terrain that is rich with historical discoveries and vivid portraits of a remarkable female pantheon."—Graham M. Schweig, author of Dance of Divine Love: India's Classic Sacred Love Story and Bhagavad Gita: The Beloved Lord's Secret Love Song