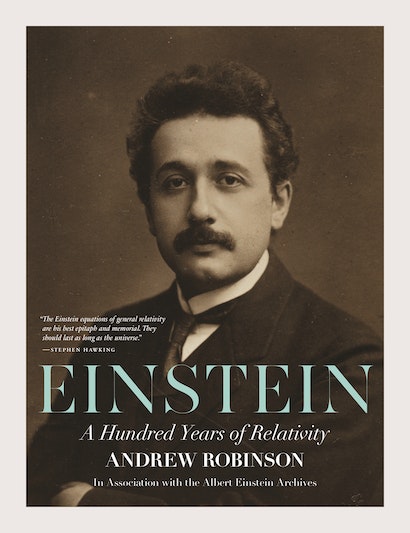 “The eternal mystery of the world is its comprehensibility … The fact that it is comprehensible is a miracle.”

Albert Einstein’s universal appeal is only partially explained by his brilliant work in physics, as Andrew Robinson demonstrates in this authoritative, accessible, and richly illustrated biography. The main narrative is enriched by twelve essays by well-known scientists, scholars, and artists, including three Nobel Laureates. The book presents clearly the beautiful simplicity at the heart of Einstein’s greatest discoveries, and explains how his ideas have continued to influence scientific developments such as lasers, the theory of the big bang, and “theories of everything.” Einstein’s life and activities outside of science are also considered, including his encounters with famous contemporaries such as Chaplin, Roosevelt, and Tagore, his love of music, and his troubled family life. The book recognizes that Einstein’s striking originality was expressed in many ways, from his political and humanitarian campaigns against nuclear weapons, anti-Semitism, McCarthyism, and social injustices, to his unconventional personal appearance.

Published in association with the Albert Einstein Archives at the Hebrew University of Jerusalem, the book draws on this exceptional resource of Einstein’s private papers and personal photographs.

This new edition, published to recognize the centenary of the publication of Einstein’s General Theory of Relativity, includes an important new afterword by Diana Kormos Buchwald, the director of the Einstein Papers Project at the California Institute of Technology.

Andrew Robinson is the author of more than two dozen books, including The Story of Measurement, Genius: A Very Short Introduction, and biographies of Jean-François Champollion (Cracking the Egyptian Code), Michael Ventris (The Man Who Deciphered Linear B), and Thomas Young (The Last Man Who Knew Everything). He writes for many newspapers and magazines and is a former literary editor of the Times Higher Education Supplement.The Albert Einstein Archives: According to the terms of Albert Einstein's will, the Hebrew University of Jerusalem is the last depository of his personal papers and holds the copyright to his literary estate. Today this unique collection forms the Albert Einstein Archives, the world's foremost such resource. Its goal is to preserve, restore, and expand its holdings, enhance accessibility to the material, administer Einstein's literary estate, and increase public awareness of the scientific achievements, political activities, and moral and humane values of Albert Einstein.

"A peerless introduction to the man, his life, and his scientific theories. . . . [T]his is by far the best book about Einstein that I have ever come across."—Patrick Moore, BBC Sky at Night

"Most appealing. . . . [C]ontains material on all aspects of Einstein's scientific work and private life . . . It is filled with a myriad of familiar and not-so-familiar images."—Physics World

"Einstein's life was full of paradoxes, and this lovely coffee table book, with essays by Stephen Hawking, Philip Anderson, Steven Weinberg and others, reveals them all."—New Scientist

"In [this] richly illustrated volume . . . Andrew Robinson tells us about both the science and the man, his narrative interspersed with contributions from others who knew Einstein personally or can bring their own expertise to bear on the achievements of the great man."—Jewish Chronicle

"A thoroughly grounded biography of Einstein. This book appeals to anyone interested in the universe, science or physics. This is one of the best books on Einstein to be found."—School Librarian

"The commentaries are excellent, extremely helpful, and a very welcome addition to the literature on Einstein's theories of relativity. . . . With its plentiful photographs and iconic, whimsical images, Robinson’s work has great aesthetic appeal. The book offers a general introduction to Einstein in which his scientific achievements and his vivid personality are clearly conveyed. . . . A fitting tribute to the man and his work, on the 100th anniversary of Einstein’s general theory of relativity."—Metascience

"An extremely charming presentation of many aspects of the public and private figure of Albert Einstein and of his scientific work."—Roberto Lalli, Isis