A new biography of Carl Linnaeus, offering a vivid portrait of Linnaeus’s life and work 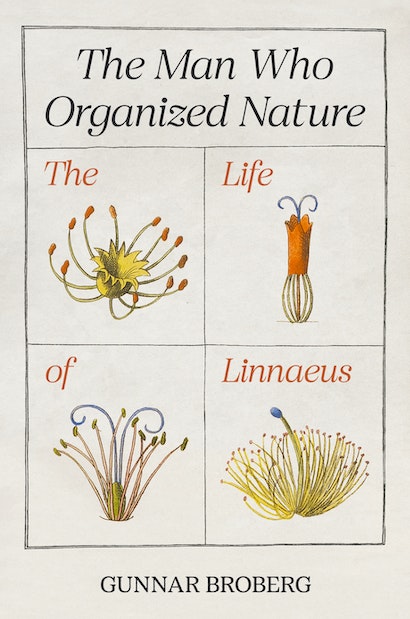 Carl Linnaeus (1707–1778), known as the father of modern biological taxonomy, formalized and popularized the system of binomial nomenclature used to classify plants and animals. Linnaeus himself classified thousands of species; the simple and immediately recognizable abbreviation “L” is used to mark classifications originally made by Linnaeus. This biography, by the leading authority on Linnaeus, offers a vivid portrait of Linnaeus’s life and work. Drawing on a wide range of previously unpublished sources—including diaries and personal correspondence—as well as new research, it presents revealing and original accounts of his family life, the political context in which he pursued his work, and his eccentric views on sexuality.

The Man Who Organized Nature describes Linnaeus’s childhood in a landscape of striking natural beauty and how this influenced his later work. Linnaeus’s Lutheran pastor father, knowledgeable about plants and an enthusiastic gardener, helped foster an early interest in botany. The book examines the political connections that helped Linnaeus secure patronage for his work, and untangles his ideas about sexuality. These were not, as often assumed, an attempt to naturalize gender categories but more likely reflected the laissez-faire attitudes of the era. Linnaeus, like many other brilliant scientists, could be moody and egotistical; the book describes his human failings as well as his medical and scientific achievements. Written in an engaging and accessible style, The Man Who Organized Nature—one of the only biographies of Linnaeus to appear in English—provides new and fascinating insights into the life of one of history’s most consequential and enigmatic scientists.

Gunnar Broberg (1942–2022) was professor emeritus of history of ideas and sciences at Lund University in Sweden. He was the author of numerous books, including Golden Apples, which won the August Prize for best Swedish nonfiction title of the year, and The History of the Night, which was nominated for Best Swedish History Book of the Year.

“A thorough compilation of knowledge about the great systematizer. From local trees in Sweden to global natural history, this new appreciation of Linnaeus helps us better understand the history and heritage of biodiversity.”—Alison Bashford, author of The Huxleys: An Intimate History of Evolution

“Carl Linnaeus is one of the people who shaped the way we all view the world, but few of us know about the man behind the naming system. Gunnar Broberg’s lyrical biography brings him to life, not just as a scientist but as a human being, from the sometimes harrowing events of his childhood through the full flower of his genius to his reflections in later years. Throughout, the social, political, and scientific contexts are center stage, making this essential book not just the story of a man and his times, but also of a man in his times.” —Matthew Cobb, author of The Idea of the Brain: A History

“Gunnar Broberg leaves no archival page unturned in this authoritative and captivating biography of Linnaeus. Thirty-eight vignettes, richly interlaced with voices from the past, cover every aspect of the great systematist’s life, including its dark and irrational sides.”—Staffan Müller-Wille, University of Cambridge

“Gunnar Broberg’s monumental biography places Linnaeus’s accomplishments as a naturalist in the context of his long and busy life, including family, friends, rivals, finances, travels, and institutions. It is an understatement to call Linnaeus a prolific author, and Broberg draws on an impressive range of published and unpublished writings.”—Harriet Ritvo, author of Noble Cows and Hybrid Zebras: Essays on Animals and History