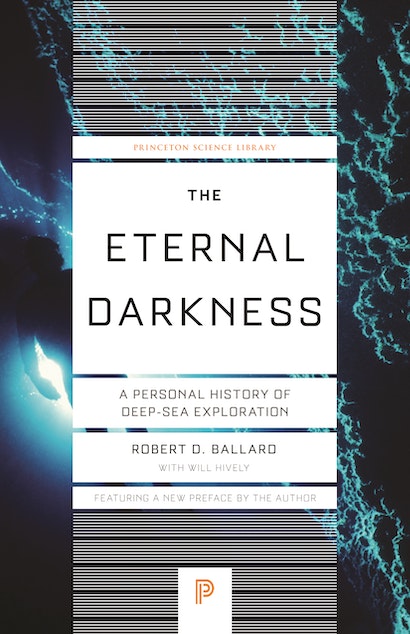 Until a few decades ago, the ocean depths were almost as mysterious and inaccessible as outer space. Oceans cover two-thirds of the earth’s surface with an average depth of more than two miles — yet humans had never ventured more than a few hundred feet below the waves. One of the great scientific and archaeological feats of our time has been finally to cast light on the “eternal darkness” of the deep sea. This is the story of that achievement, told by the man who has done more than any other to make it possible: Robert Ballard.


Ballard discovered the wreck of the Titanic. He led the teams that discovered hydrothermal vents and “black smokers” — cracks in the ocean floor where springs of superheated water support some of the strangest life-forms on the planet. He was a diver on the team that explored the mid-Atlantic ridge for the first time, confirming the theory of plate tectonics. Today, using a nuclear submarine from the U.S. Navy, he’s exploring the ancient trade routes of the Mediterranean and the Black Sea for the remains of historic vessels and their cargo. In this book, he combines science, history, spectacular illustrations, and first-hand stories from his own expeditions in a uniquely personal account of how twentieth-century explorers have pushed back the frontiers of technology to take us into the midst of a world we could once only guess at.


Ballard begins in 1930 with William Beebe and Otis Barton, pioneers of the ocean depths who made the world’s first deep-sea dives in a cramped steel sphere. He introduces us to Auguste and Jacques Piccard, whose “Bathyscaph”descended in 1960 to the lowest point on the ocean floor. He reviews the celebrated advances made by Jacques Cousteau. He describes his own major discoveries — from sea-floor spreading to black smokers — as well as his technical breakthroughs, including the development of remote-operated underwater vehicles and the revolutionary search techniques that led to the discovery and exploration of the Titanic, the Nazi battleship Bismarck, ancient trading vessels, and other great ships.


Readers will come away with a richer understanding of history, earth science, biology, and marine technology — and a new appreciation for the remarkable men and women who have explored some of the most remote and fascinating places on the planet.

"A straightforward look at a complicated business that shows again not just that exploration is worth doing but that even at home here on earth it is far from over."—Michael Parfit, New York Times Book Review

"An excellent book…. It is impossible to put down."—Richard Shelton, Times Literary Supplement

"The man who found the Titanic, discovered black smokers on the sea floor, and first ventured into the mid-Atlantic ridge tells the story of deep-sea exploration…. Scores of photographs highlight the steadily absorbing text; together, words and pictures present a vital and authoritative general history of humanity's adventures deep beneath the waves."—Publishers Weekly

"Drawing from the expertise gained during his more than one hundred trips into the abyss, Ballard highlights historical and scientific events that he and Hively weave into a series of scintillating tales."—Loretta DiPietro, , Scientific American

"Cool technology meets personal obsession in this history that's also a memoir by the discoverer of the wreck of the Titanic. Break out the bathospheres, the minisubs and the ROVs (Remote Operated Vehicles); it's time to take the plunge and see what's Down There."—Washington Post Book World

"This book takes the reader into the deep-sea realm along the discovery paths of famous deep-sea explorers as chronicled by the preeminent explorer of our time. Ballard's book will leave readers enlightened and concerned about the expanding role the oceans are playing as the future evolves."—Choice

"Pitched to the lay reader, Ballard's The Eternal Darkness is engaging, sometimes thrilling and always authentic. . . . Ballard was also involved in the 1985 discovery of the Titanic, and his account of the sleuthing that went into the hunt makes for terrific reading."—Dennis Drabelle, Washington Post Book World

"An informative and interesting book written with authority on a fascinating subject."—Daniel Lenihan, Naval History

"A remarkable story of science and adventure, as fascinating as the exploration of space and the landing on the moon."—American Way

"The Eternal Darkness is a highly readable book. . . . I am always on the lookout for books that will motivate and enthuse potential and present students. The Eternal Darkness will become a firm favourite on that list, as Ballard shows what can be achieved by hard work, determination and unbounded enthusiasm."—Paul Tyler, New Scientist

"Doing science is exciting! This is the main message of Ballard's fascinating combination memoir and history of deep ocean science."—Library Journal

"Titanic discoverer Ballard . . . handily summarizes a technology unfamiliar to many readers. Ballard has published popular books about his recovery of other famous sunken ships besides the movie's namesake, which adds cachet to this more scholarly work."—Booklist

"Dr. Ballard is a passionate advocate of deep-sea exploration, pointing out that all such expeditions so far undertaken have probably surveyed less than 1 percent of the sea floor…. One can hardly disagree with Dr. Ballard's proposal that we should expand that 1 percent."—Phoebe-Lou Adams, Atlantic Monthly

"Bob Ballard, building on the early work of Jacques Cousteau, is the preeminent pioneer in truly deep sea exploration and here is the fascinating, gripping story that only he is qualified to tell."—Walter Cronkite

"Bob Ballard's The Eternal Darkness chronicles the exciting 20th-century advances in underwater technology, many of them his own. Their contributions to deep ocean knowledge, exploration, discovery, salvage, and natural resource utilization have forever changed the way we view and understand our planet's oceans, and will, in the future, change the way we care for our seas. Ballard now joins Cousteau as another inspired visionary."—Scott Carpenter

"Bob Ballard is a tenacious explorer of the deep ocean and discoverer of ancient sea treasures. Two thousand years ago no trains, planes, or automobiles existed. Most transportation was by sea. Important knowledge of the past can only be uncovered from where it lies, buried in the ocean floor. Bob exhibits his fascination with the unknown by uncovering history that lies at the bottom of the sea floor that is critical to our understanding of the ancient world."—Jean-Michel Cousteau

"Ballard is one of the great explorers of the age. He is not only a great explorer, but a gifted story-teller and an evangelist for science. His joy and contagious excitement in exploration and science have captured the imagination of thousands of students, and rescuing them from dull science teachers, has converted them to pursuing careers in scientific discovery. Now in The Eternal Darkness he draws on all his talent, and his hair-raising experiences, to capture the rest of us in a great adventurous read."—John F. Lehman

"While making some of the most significant discoveries of all time, from finding the Titanic to exposing the geophysical processes that cause oceans to form and continents to move, explorer-scientist Robert Ballard has lived adventures that combine the best of scientific research and Indiana Jones. Bristling with suspense and laced with wry humor, The Eternal Darkness will captivate even the most seasoned landlubber."—Sylvia A. Earle

"Ballard's perspective on specific events in the history of deep-sea explorations is fresh and exciting. This is an important record of the remarkable progression in technology from extremely primitive underwater diving bells to a multiplicity of manned and unmanned systems enabling human presence in the deep ocean."—J. Frederick Grassle, Rutgers University