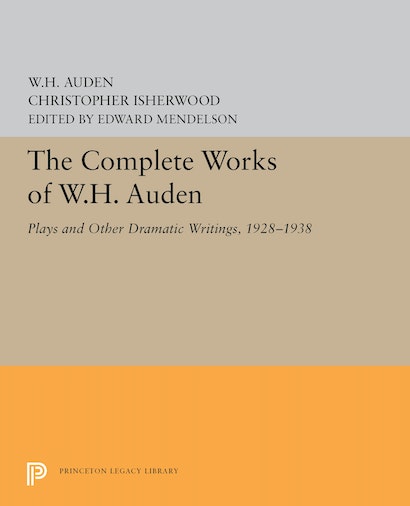 This volume contains Auden and Christopher Isherwood’s dramatic extravaganzas The Dog Beneath the Skin, the Ascent of F 6, and On the Frontier. It also includes the two versions of Paid on Both Sides — which are so different as to constitute two works — and Auden’s satiric revue The Dance of Death. Two plays appear in print for the first time, Auden and Isherwood’s The Enemies of a Bishop and Auden’s The Chase. Also included are Auden’s prose and verse written for doucmentary films, a cabaret sketch, and an unpublished radio script. Many of the texts include poems by the young Auden that have never been published before. The extensive historical and textual notes trace the complex history of the production and revision of these plays, including full texts and rewritten scenes.
During the years when these works were created, Auden moved from a “poetry of isolation” to more expansive and public writing. After he left Oxford at age twenty-one, during the summer of 1928, he wrote the tragicomic charade Paid on Both Sides. During the next ten years, until he left England for America, he created the increasingly ambitious works for stage, film, and broadcast that appear in this volume. The most important of these plays were written in collaboration with Isherwood. As the world political situation worsened, Isherwood and Auden’s style combined the energy of popular entertainment with the urgency of sacramental ritual.
Edard Mendelson is Professor of English and Comparative Literature at Columbia University and the author of Early Auden (Viking). He is the editor of two volumes of Aduen’s poetry, Collected Poems (Random House) and The English Auden (Random House).