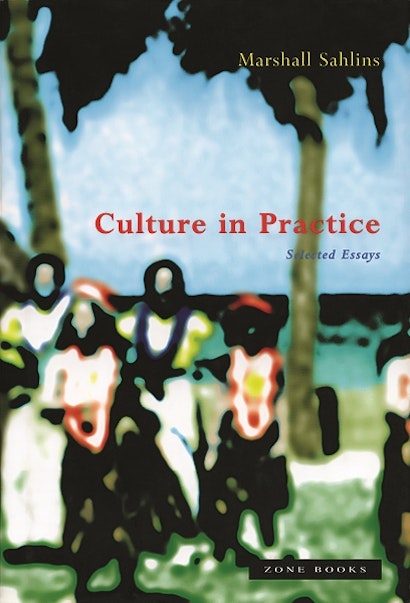 Culture in Practice collects both the seminal and the more obscure academic and political writings of the anthropologist Marshall Sahlins from the 1960s through the 1990s. More than a compilation, this book unfolds as an intellectual autobiography. Sahlins’s reportage and reflections on the anti-war movement in 1964 and 1965 mark the intellectual development from earlier general studies of culture, economy, and human nature to the more historical and globally aware works on indigenous peoples, especially Pacific Islanders.

Throughout these essays, Sahlins also engages the cultural specificity of the West, developing a critical account of the distinctive ways that we act in and understand the world. Culture in Practice includes a play / review of Robert Ardrey’s sociobiology, essays on “native” consumption patterns of food and clothes in America and the West, explorations of how two thousand years of Western cosmology have affected our understanding of others, and ethnohistorical accounts of how cultural orders of Europeans and Pacific Islanders structured the historical experiences of both.

Throughout this range of scholarly inquiries and critical commentaries, Sahlins offers his own way of thinking about the anthropological project. To transcend our native categories in order to understand how other peoples have been able historically to construct their own modes of existence — even now, in the era of globalization — is the great challenge of contemporary anthropology.

"A publication that has value both as an historical record of changing Western intellectual fortunes and as an authoritative compendium of observations on those cultures whose beliefs are so often marginalized."—Robert Pepperell, Leonardo

“In Culture in Practice, Marshall Sahlins proves himself to be one of the most profound and original anthropologists of our time. In the breadth of his perspective, his immense knowledge, his balanced sense of judgment and his refusal to bow to intellectual fashion, Sahlins is without doubt the wise man of contemporary anthropology.” — Claude Lévi-Strauss, Collège de France