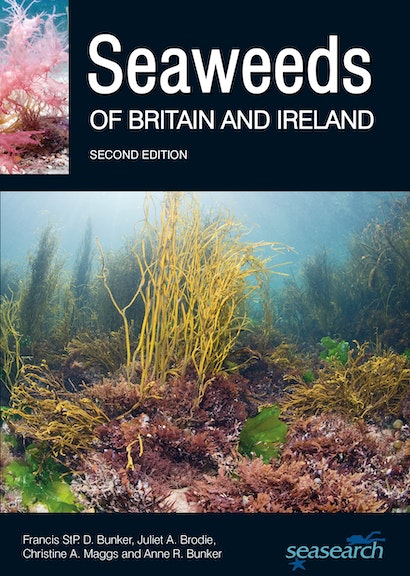 The cool temperate waters of the British and Irish seas contain an astonishing 6% of the world’s algal species, more than 600 different seaweeds, and yet most divers, snorkellers and rockpoolers can put names to only a handful of them.

The first edition of Seaweeds of Britain and Ireland has proved invaluable to an enormous number of people, not just volunteer Seasearch divers and snorkellers, and this eagerly awaited second edition will no doubt prove to be equally as popular. The aim of this book is to introduce the reader to the wonderful marine environment around Britain and Ireland, and improve identification of the wealth of seaweeds so often overlooked.
Features of the new edition include:

● Over 230 species described in detail with colour photographs, information on size, habitat and distribution maps
● Over 50 new species, many with information on how to identify to species level using microscopic features
● Key distinguishing features and areas of identity confusion highlighted
● Colour and form used to group species and aid identification using dichotomous keys
● Details of life histories and reproductive processes for the main seaweed groups
● Both scientific and English names used for species and groups
● A glossary of common and specialised terms

Francis Bunker is a marine biologist, diver and photographer with a passion for seaweeds and communicating his subject to others. Francis taught field studies at Orielton Field Centre in Pembrokeshire in the 1980s and led the local diving club to do marine biology surveys around Skomer which helped ii achieve MNR (now MCZ) status. During this time, he met his co-authors and they have remained friends and colleagues ever since. Francis and Anne were marriedin 1989 and have two now grown up children. Francis formed his environmental consultancy Marineseen in 1989 and has written hundreds of reports and contributed to several published works, diving all around the UK and various far flung corners of the world when opportunities arise. Other interests include running, swimming, Latin dance and playing guitar in a duo called Caramuxos Bravos (con gorgueras). Since 2003, Francis and Christine have run an annual Collecting and Identifying Seaweeds course for the British Phycological Society.

Juliet Brodie is a research leader in phycology at the Natural History Museum, London, specialising in the taxonomy, ecology, biodiversity and conservation of seaweeds. She studied red seaweeds for her PhD, supervised by Prof. Michael Guiry, at Galway University, Ireland, where she holds an adjunct Professorship. She is a specialist in Porphyra, red seaweed eaten around the world (e.g. laver bread in Wales and nori --­ the wrapping in sushi). She also has an interest in the green and brown seaweeds and is keen to find ways of helping people to identify these organisms. Juliet is keen to raise awareness of the seaweeds and their importance in coastal ecosystems in a time of rapid environmental change. She initiated the Big Seaweed Search www.nhm.ac.uk/ take-part/citizen-science/big-seaweed-search.html which you can join in. Juliet is currently President of the International Phycological Society. She runs a choir, loves natural history and likes to get together with her friends.

Christine Maggs has been interested in seaweeds since childhood. During her degree in Botany, she had a work placement on seaweeds in the Natural History Museum, London, and went on a scientific diving expedition to Brazil. She found her first new species of seaweed, Schmitzia hiscockiana, when working at Orielton. This led to a PhD on seaweeds in Galway, Ireland, under the supervision of Prof. Michael Guiry. Since then she has researched the molecular systematics of seaweeds with particular interests in alien marine algae, conservation, and exploitable seaweed resources. She was appointed as lecturer in marine biology at Queen's University Belfast in 1995 and became Professor of Phycology in 2004. She has published over 120 peer-reviewed scientific papers and co-authored two books in the Seaweeds of the British Isles series. Christine and Juliet are joint Editors-in-Chief of the European Journal of Phycology.

Anne Bunker was inspired to follow a career in marine biology by family trips to the seaside and an A-level field trip to Kilve Court in Somerset. She now lives beside the tidal Pembroke River and some wonderful seashores where she enjoys studying seaweeds in her spare time. On a visit to the Bunker household expect to find the fridge full of seaweeds and the dining table in use as a laboratory bench. Anne taught marine ecology to students at Orielton Field Centre before joining the Countryside Council for Wales as part of its intertidal survey team. She is currently a Marine Conservation Officer for Natural Resources Wales. Anne is a bell ringer and a council member of the Porcupine Marine Natural History Society www.pmnhs.co.uk and enjoys watercolour painting, kayaking and swimming.

"A truly valuable resource . . . . this is a great guide for all who love seaweeds, or for those who just enjoy being out on the shore."—Harry Teagle, The Marine Biologist