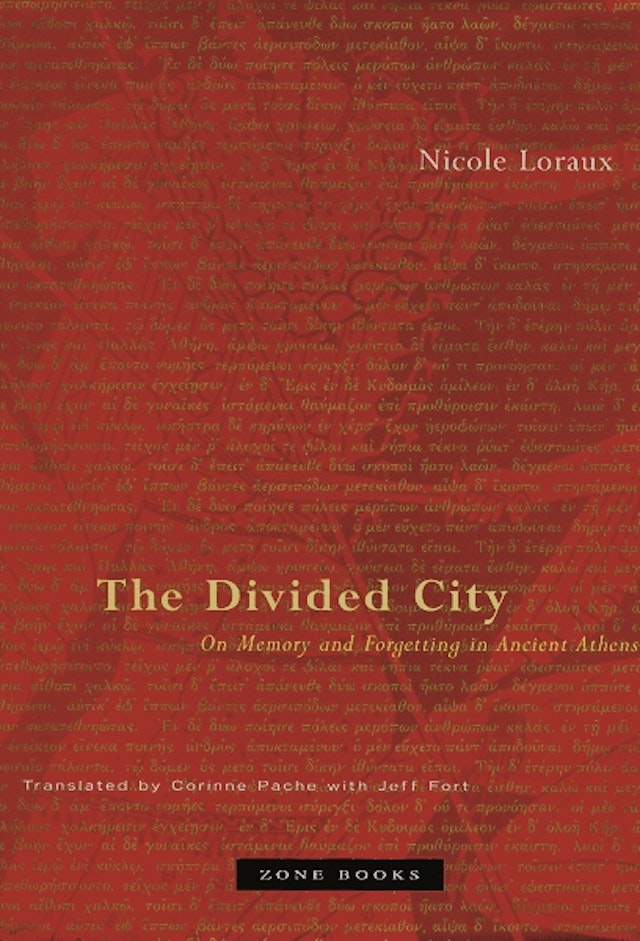 Athens, 403 BCE. The end of the bloody oligarchic dictatorship of the Thirty. The democrats return to the city victorious. Renouncing vengeance, in an act of amnesia, citizens call for — if not invent — amnesty. They agree to forget the unforgettable, the “past misfortunes” of civil strife, stasis. More precisely, what must be denied is that stasis — simultaneously partisanship, faction, and sedition — is at the heart of Greek politics.

This crucial moment of Athenian political history, Nicole Loraux argues in The Divided City, must be interpreted as constitutive of, not a threat to, politics and political life. Divided from within and against itself, the city is formed by that which it refuses. Conflict, the calamity of civil war, is the other, dark side of the beautiful, unitary city of Athens. Beneath the Greek city erected in totality and ideality, Loraux rediscovers the discord affecting the entire city, the stasis manifesting the fundamental conflictual ambivalence of the civic order. The city, by definition, “is doomed to divide itself in two.”

In a brilliant analysis of the Greek word for voting, diaphora, Loraux underscores the conflictual and dynamic motion of democratic life: voting appears as the process of dividing up, of disagreement, in short, of agreeing to divide up and choose between. Not only does Loraux reconceptualize the definition of ancient Greek democracy, but she ultimately allows the contemporary reader to rethink the functioning of modern democracies in its critical moments of dissension and divide, of internal stasis.