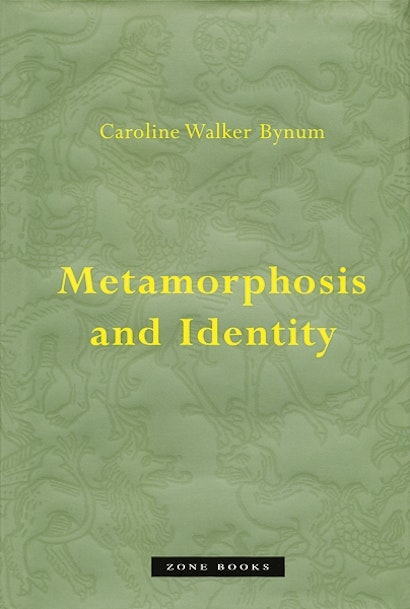 In Metamorphosis and Identity, award-winning historian Caroline Walker Bynum explores the Western obsession with the nature of change and personal identity. Focusing on the twelfth and thirteenth centuries, but concerned as well with Antiquity and the twentieth century, Bynum confronts the question of why intellectuals, religious leaders, and ordinary people alike exhibited a precise and persistent desire to understand how the individual both changes and remains the same.

Examining shifting conceptions of change itself in the years around 1200, Bynum situates the intense medieval curiosity about radical or substantial change in the context of specific cultural and social developments. Two images of change — hybridity and metamorphosis — were prominent in imaginative literature, theology, the visual arts, and natural philosophy; these sites of competing and shifting understandings each entailed different anthropological and psychological assumptions. As Bynum demonstrates in the four essays of Metamorphosis and Identity, the fascination with boundary crossing and alterity reveals an effort across different genres to delineate the regularity of nature and to establish a strong sense of personal identity, perduring even beyond the grave.

Included as the final chapter of Metamorphosis and Identity is Bynum’s 1999 NEH Jefferson Lecture, the highest honor given by the U.S. government to a scholar in the humanities.

"Bynum is asking that even while we deploy all the tricks and tools of modern historical analysis, we take seriously the obligation to marvel at the complexity, at the otherness, of the medieval world, a world that we will never perfectly understand and yet that seems to point to something worth understanding."—Patrick J. Geary, The New Republic

“Once again, Caroline Walker Bynum’s work captures, with characteristic vividness and precision, the particularity and the urgency of the thought-patterns of a long-past Middles Ages, and our own anxieties about the fragility of that ‘glorious inexplicable and… totally improbable thing: identity.’”— Peter Brown, Princeton University