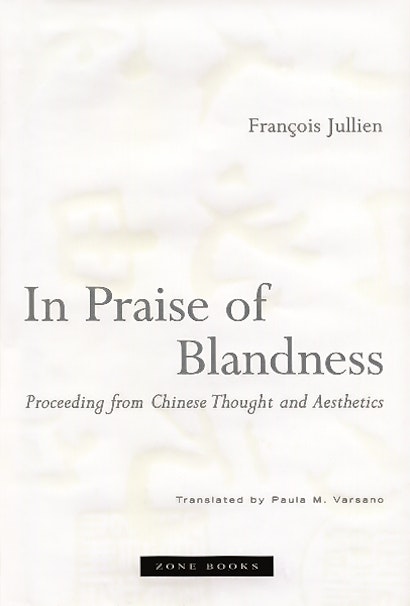 The quality of blandness: no sooner do you identify it then it begins to appear at every turn. Blandness, by definition, pays little heed to the borders our various disciplines like to draw. As the embodiment of neutrality, the bland lies at the point of origin of all things possible and so links them.— François Jullien

Already translated into six languages, François Jullien’s In Praise of Blandness has by now become a classic. Appearing for the first time in English, this groundbreaking work of philosophy, anthropology, aesthetics, and sinology is certain to stir readers to think and experience what may at first seem impossible: the richness of a bland sound, a bland meaning, a bland painting, a bland poem. In presenting the value of blandness through as many concrete examples and original texts as possible, Jullien allows the undifferentiated foundation of all things — blandness itself — to appear. After completing this book, readers will reevaluate those familiar Western lines of thought where blandness is associated with lack — the undesirable absence of particular, defining qualities.

Jullien’s In Praise of Blandness traces the elusive appearance and crucial value of blandness from its beginnings in the Daoist and Confucian traditions to its gradual integration into literary and visual aesthetics in the late medieval period and beyond. Slowly developing into a positive quality in the Chinese aesthetic and ethical traditions, the bland comprises the balanced and unnamable union of all potential values. It embodies a reality whose very essence is change, and provides an infinite opening onto the breadth of human expression and taste.

“François Jullien is now a familiar voice. And in In Praise of Blandness he carries on philosophizing. In all his work, Jullien’s point of departure is that a worldview is sedimented into the syntax and semantics of our natural languages. Jullien uses a profoundly nuanced and sophisticated reading of Chinese texts to challenge our own common-sense cosmological assumptions. By following his complex arguments, readers will discover the very core of cultural difference. It is an awareness of this difference that provides the stock for creative advance.”— Roger T. Ames, University of Hawai’i