The first English translation of one of the earliest and most brilliant art-historical surveys, from one of the greatest modern art historians 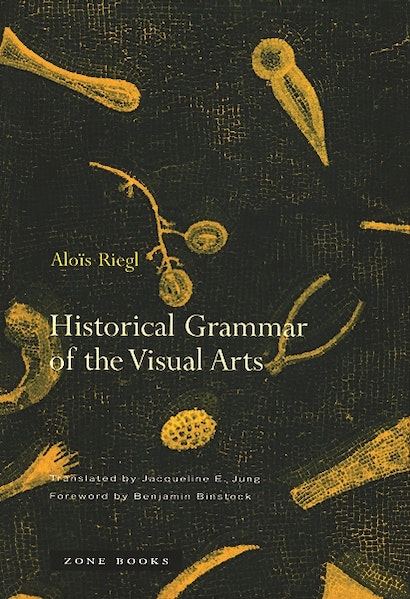 Aloïs Riegl (1858–1905) was one of the greatest modern art historians. The most important member of the so-called Vienna School, Riegl developed a highly refined technique of visual or formal analysis, as opposed to the iconological method championed by Erwin Panofsky with its emphasis on decoding motifs through recourse to texts. Riegl pioneered new understandings of the changing role of the viewer, the significance of non–high art objects such as ornament and textiles, and theories of art and art history, including his much-debated neologism Kunstwollen (the will of art). Finally, his Historical Grammar of the Visual Arts, which brings together many of the diverse threads of his thought, is available to an English-language audience in a superlative translation by Yale professor Jacqueline E. Jung. In one of the earliest and perhaps the most brilliant of all art historical “surveys,” Riegl addresses the different visual arts within a sweeping conception of the history of culture. His account derives from Hegelian models but decisively opens onto alternative pathways that refuse attempts to reduce art merely to the artist’s intentions or its social and historical functions.

Aloïs Riegl's major works previously translated into English include Problems of Style: Foundations for a History of Ornament, Late Roman Art Industry, and The Group Portraiture of Holland.

“The intelligence, originality, and range of Riegl’s writings remain unsurpassed in the history of art-historical scholarship. He occupies a singular position as a founder of his discipline and one of its most radical thinkers, and represents a crucial precedent for the current reevaluation of the theory and practice of art history today. . . . If you are interested in art history, you should read this book, and keep it, if not on a lectern in your study, on your shelf.”—from the foreword by Benjamin Binstock

“In this painstaking and learned translation by Jacqueline Jung, Riegl’s dense and complex reflections will become accessible to English-speaking readers, who will be aided both by her helpful comments on translation issues and by Benjamin Binstock’s lucid introduction to the arguments and context of Riegl’s book.”—Whitney Davis, University of California at Berkeley