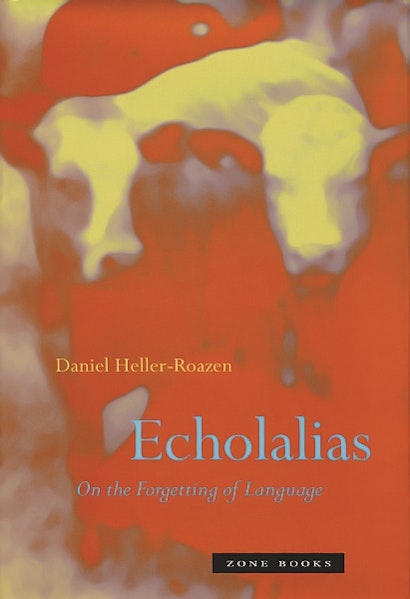 Just as speech can be acquired, so can it be lost. Individuals can forget words, phrases, even entire languages, and over the course of time speaking communities, too, let go of the tongues that were once theirs, as languages grow obsolescent and give way to others. In Echolalias, Daniel Heller-Roazen reflects on the many forms of linguistic forgetfulness.

In twenty-one concise chapters, he moves among classical, medieval, and modern culture, exploring the interrelations of speech, writing, memory, and oblivion. Whether the subject is medieval literature or modern fiction, classical Arabic poetry or the birth of French language, structuralist linguistics or Freud’s writings on aphasia, Heller-Roazen considers with precision and insight the forms, effects, and ultimate consequences of the persistence and disappearance of language.

In speech, he argues, destruction and construction often prove inseparable. Among speaking communities, the vanishing of one language can mark the emergence of another, and among individuals, the experience of the passing of speech can lie at the origin of literary, philosophical, and artistic creation.

From the infant’s prattle to the legacy of Babel, from the holy tongues of Judaism and Islam to the concept of the dead language and the political significance of exiled and endangered languages today, Echolalias traces an elegant, erudite, and original philosophical itinerary, inviting us to reflect in a new way on the nature of the speaking animal who forgets.

"This is a superb book. It combines erudition of the subtlest kind with literary finesse. We read it with pleasure and intellectual gain. And it truly makes us think — about the act of speaking, about the languages, about poets. Books don’t come any better than this."—Jürgen Trabant, Süddeutsche Zeitung

"Heller-Roazen blends tremendous erudition in a new form, citing the Talmud, the pre-Islamic poets, Dante, Spinoza, and Elias Canetti with the same acuity and playfulness. He succeeds in making a gesture all too rare today: a philosophical gesture, whose center is the questioning of language."—Lila Azam Zanganeh, Le Monde

“If there ever was a book like this one, I cannot remember it. Daniel Heller-Roazen’s gorgeous prose strings beads of dazzling example into a necklace of allusion. . . . When we come to the end we awaken, like Circe’s pigs, filled with regret that that adventure is over, but filled also with a new wonder about human language, from its most humble letters to the heights of poetry. If you read this book, you will not easily forget it.”— David Nirenberg, author of Communities of Violence

“Reading Daniel Heller-Roazen’s book is an extraordinary intellectual adventure. Vertiginous landscapes of learning open up at every moment, but the writing never loses its aphoristic edge. Much is said and even more is suggested. This book rebuilds whole worlds from the ravages of loss and forgetting, and also discreetly teaches us that there are no worlds that loss and forgetting do not beset.” — Michael Wood, author of The Road to Delphi

“Daniel Heller-Roazen has written a magical and learned story of language. Here the life and death and never-ending mutability of languages, the babbling lost in the interstices of speech, the history of typographical marks, the mysteries of animals’ sounds and speech disorders, forgotten tongues and mother tongues, linguistic paradoxes and tragedies all acquire a brilliant and Ovidian intensity.”— Susan Stewart, author of Columbarium and Poetry and the Fate of the Senses