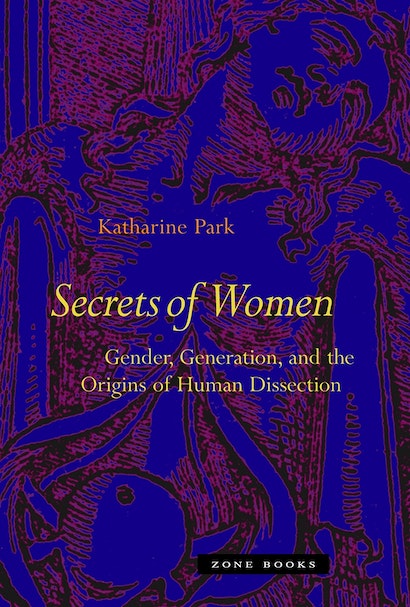 Toward the end of the Middle Ages, medical writers and philosophers began to devote increasing attention to what they called “women’s secrets,” by which they meant female sexuality and generation. At the same time, Italian physicians and surgeons began to open human bodies in order to study their functions and the illnesses that afflicted them, culminating in the great illustrated anatomical treatise of Andreas Vesalius, in 1543.

Katharine Park traces these two closely related developments through a series of case studies of women whose bodies were dissected after their deaths: an abbess, a lactating virgin, several patrician wives and mothers, and an executed criminal. Drawing on texts and images, she explores the history of women’s bodies in Italy between the late thirteenth and the mid-sixteenth centuries in the context of family identity, religious observance, and women’s health care.

Secrets of Women explodes the myth that medieval religious prohibitions hindered the practice of human dissection in medieval and Renaissance Italy, arguing that female bodies, real and imagined, played a central role in the history of anatomy during that time. The opened corpses of holy women revealed sacred objects, while the opened corpses of wives and mothers yielded crucial information about where babies came from and about the forces that shaped their vulnerable flesh.

In the process, what male writers knew as the “secrets of women” came to symbolize the most difficult challenges posed by human bodies — challenges that dissection promised to overcome. Thus Park demonstrates the centrality of gender to the development of early modern anatomy through a study of women’s bodies and men’s attempts to know them and, through them, to know their own.

"Park’s meticulously documented book is medical historiography at its best … . She has shed light on a notion — ‘the secrets of women’ — that should have long ago been recognized as deserving far more attention than has been paid to it."—The New Republic

"Park’s book will undoubtedly prove to be an important contribution to the history of anatomy. For the first time, it extensively discusses the history of anatomy from the viewpoint of the corpse and, because of its particular focus on women’s bodies, it will radically change the way we think about the (male) history of the anatomized body."—Nature

"This is a fascinating and astute discussion with an exciting thesis, taking the subject of dissection out of the medical school and situating it origins in practices of everyday life."—Times Literary Supplement