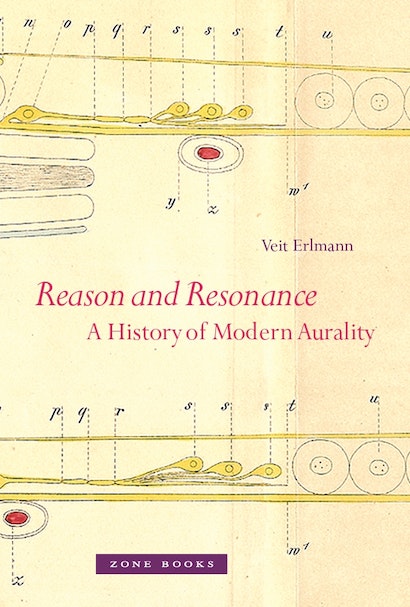 Hearing has traditionally been understood as the second sense — less rational and modern than seeing, the master of all senses, the first sense. Reason and Resonance is the first full-length study to explode this myth by reconstructing the history of aurality and the process through which the ear assumed a central role in modern culture and rationality.

From the beginning of the seventeenth century to the early decades of the twentieth, scientists believed that resonance was the operative mechanism of the human ear. To comprehend the act of hearing was to recognize the existence of a sympathetic resonance between vibrating air and various parts of the inner ear. But resonance, by extension, also entailed adjacency, sympathy, and the collapse of the boundary between perceiver and perceived — phenomena usually thought of as polar opposites of reason.

As Veit Erlmann argues, however, with the emergence of resonance as the centerpiece of modern aurality, a new type of epistemology triumphed, one involving an intimate and complex relation between reason and resonance. From 1633 to 1928, philosophy and otology struggled to comprehend a set of strikingly similar problems regarding the foundations of subjectivity, truth, and sensation. Focusing on the materiality and material culture of listening, Erlmann lucidly elaborates a history of aurality that simultaneously provides a new history of modernity wherein the modern subject is neither deaf nor dumb, ocularcentric or logocentric. The subject of modernity takes shape in its uneasy struggles and truces with “cogito” and “audio,” the effect of the intertwined histories of thinking and hearing.

Reason and Resonance begins with a transformative interpretation of Descartes that counters the philosopher’s usual profile as the “founding father of the modernist visualist paradigm.” Erlmann then traces the genealogy of the “intimate animosity” between reason and resonance through a series of interrelated case studies involving a variegated cast of otologists, philosophers, physiologists, pamphleteers, and music theorists. More an auditory history of knowledge than a history of auditory culture, Reason and Resonance follows the movement of modernity through a sense hitherto unheard and thought.

“Veit Erlmann is one of the most prominent scholars to have advanced the cause of auditory culture…. In Reason and Resonance, Erlmann investigates the genealogy of the perceived opposition between reason and resonance—an auditory phenomenon that usually is seen as posing unique challenges to rationalist ideas about the role of mind in perception—doing so by means of a series of well-chosen case studies….He shows that the received view—that from the early seventeenth to the early twentieth centuries reason and resonance were diametrically opposed—is only part of the story. Erlmann’s thesis is that during this period ideas about reason and resonance developed in contiguity. Even more, the acoustic and physiological phenomenon of resonance not only played a vital role in the history of modern aurality, but also—and this is the most exciting point—of rationality. Resonance is thus inextricably woven into modernity.”— Hans-Joachim Braun, Technology and Culture