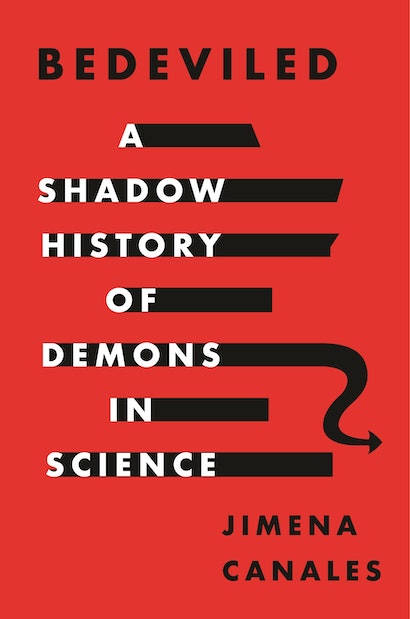 Bedeviled
Available in 3 editions
Buy This

The glass of science is half empty. Researchers across the globe are fixated on all that we do not know yet. It was the same one hundred years ago, and more than one hundred years before then too. Every once in a while, progress arrives.

Ah ha! Something clicks in someone’s head. Everything falls into place. The result is nothing short of magical. What had once been invisible suddenly seems to have been hiding in plain sight. Inspiration happens to all of us—writers, artists, scientists, as well as ordinary people. The gap between knowledge and imagination is not as inscrutable as it has been made to appear. It is consequential long after the moment when these first ideas evaporate and practical concerns take over.

By previewing a world of wonders long before the curtains are drawn and the show begins, we can sit in on the rehearsal of our own scientific and technological future. The antechamber of discovery is a place where ideas are forged before they see the light of day. It is the incubator that shapes science before it is tested. When the spectacle of our achievements includes the trials and tribulations that led to them, knowledge looks different.

How can we explain the trajectory of science and technology that has taken us from the steam engine to the microchip, or from the early automata of the Scientific Revolution to the artificial intelligence of today? Scientists wake up every morning, drive to the lab, write papers, teach courses, train colleagues, sometimes receive prizes and accolades, retire, and die. Sociologists and anthropologists have carefully followed them every step of the way. This path has a clear logic that works in piecemeal fashion, yet somewhere along the way something greater than the actors themselves seems to break in. Scholars have been fascinated by moments of discovery in science, when genius scientists have a brilliant eureka idea. Breakthroughs often arrive when least expected. What was once impossible no longer is.

New experiments and technologies are first conceived in the minds of scientists. They are thinkable long before they become feasible. When scientists are hard at work, their minds are frequently up in the clouds.

The surprising nature of discovery and invention may lead us to suspect that something akin to an unconscious force connives behind the boundaries of reason and drives their development from outside. Discovery has its own twisted, fascinating, and at times terrifying history. It also has its own highly developed technical vocabulary. Scientists often use the word “demon” during the most preliminary phases of their research. It designates something that is not yet fully known or understood. These demons are not religious, supernatural, monstrous, or merely evil. They refer to something that defies rational explanation and may stump or break a hypothesis or a law of nature. Their function is not primarily metaphorical or figurative. They are technical terms whose definition can be found in almost any dictionary.

The Oxford English Dictionary defines “demons” in science as “any of various notional entities having special abilities, used in scientific thought experiments.” They are frequently mentioned eponymously “with reference to the particular person associated with the experiment” and follow a pattern originating with René Descartes, the seventeenth-century thinker known for inaugurating the Age of Reason.1

Descartes’s demon opened up the floodgates to many others, continuing up to this day. New names are added as soon as they become part of the argot of the laboratory. “Laplace’s demon” followed on the heels of “Descartes’s demon” and became a model for new calculating machines that could potentially determine the precise position and movement of all particles in the universe to know all of the past and even the future. These two demons soon faced stiff competition from the Victorian creature named “Maxwell’s demon,” who could wreak havoc with the usual course of nature. As science grew in prestige and complexity, many other demons were invoked and named after Charles Darwin, Albert Einstein, Max Planck, Richard Feynman, and others.

Figuring things out often involves invoking demons as a useful category to articulate and fill in the gaps of existing knowledge. When confronted with a particularly difficult problem, or when the universe is not working the way it should, scientists immediately start suspecting a perpetrator. Besides being given the last name of the scientist who first started thinking about the enigma, the culprits are often anthropomorphized as they become blueprints for future technologies. Researchers sometimes refer to them as he, other times as she, and often as it. As scientists imagine demons with competing abilities and picture them collaborating with or fighting against each other, they inspire the creation of ever-more-complex technological arrangements. Prototypes are constantly upgraded. New versions are right around the corner, soon to be released.

A variant spelling, “daemon,” has yet another meaning in science. In the context of computing technology, it designates “a program (or part of a program)” running inside a computer. The term can be interpreted as an acronym, either for “Disk And Execution MONitor” or for “DEvice And MONitor.” When you perform a search in your computer, lines of code called “daemons” are used to find the match you are looking for. When you log into the internet or use your smartphone, myriads of such daemons are put to work smoothing the process of communication between you, your device, and the devices of others. Today these daemons are central to the communication infrastructure around us.2

Such a façon de parler is eerily consequential. Dictionary entries reveal an open secret within a close-knit community: scientists are demon experts. Practitioners across fields agree that “science has not killed the demons” and that studying them can be extremely useful.3 To know the world, to make it better, to overcome insurmountable difficulties and dead ends, scientists routinely look for them. How did they become part of scientists’ vernacular? What broader consequences come with this mode of inquiry? What aftereffects do these practices have on the development of world history? What, if anything, relates these definitions to the original term, one derived from the ancient Greek δαιμόνιον? Is there any connection between them and the demons associated with hell and the devil?

Most dictionaries include similar entries. In them, demons no longer appear as opposite to angels. Nor are they interchangeable with any of the other creatures of religion or folklore. They are grouped with other similar creatures. The technical use of the word shows us why the religious, figurative, and literary understanding of demons remains so pertinent today.

The progress of science and technology has been marked by investigations into the possible existence of a fine and motley crew, a veritable troupe of colorful characters with recognizable outfits, proclivities, and abilities who can challenge established laws. To catch them, scientists think like them.

Jimena Canales is a writer and faculty member of the Graduate College at the University of Illinois, Urbana-Champaign. She was the Thomas M. Siebel Chair in the History of Science at the University of Illinois and associate professor at Harvard University. She is the author of The Physicist and the Philosopher: Einstein, Bergson, and the Debate That Changed Our Understanding of Time (Princeton) and A Tenth of a Second. She lives in Boston. Twitter @_Jimena_Canales

1. According to the 2014 edition of the Oxford English Dictionary, “demon, n. (and adj.)” “apparently aris[es] from Descartes’ use of a powerful or omnipotent evil demon which attempts to mislead him as to the nature of reality and existence: see Descartes Meditationes (1641) i. §xii.”