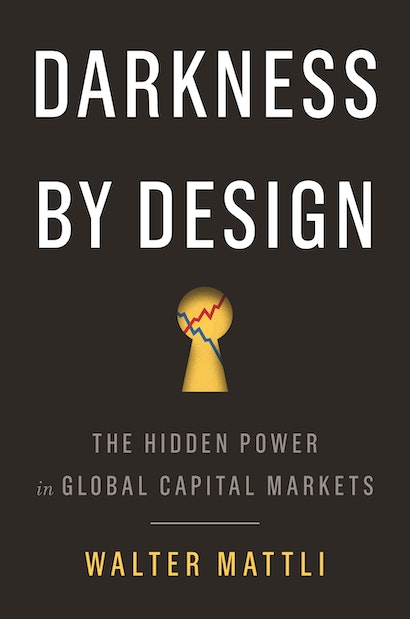 Darkness by Design
Available in 3 editions
Buy This

From New York to London, from Chicago to Tokyo, and from Frankfurt to Sydney, capital markets the world over have undergone revolutionary changes during the past two decades. The frenzied activity of traders buying and selling stocks and other financial instruments on the trading floors of the New York Stock Exchange (NYSE), the London Stock Exchange (LSE), and the Chicago Board of Trade—traditional icons of global capitalism—has been replaced by algorithmic trading and supercomputers tucked away in gigantic nondescript “datacenters” in out-of-the-way places such as Mahwah, New Jersey; Aurora, Illinois; and Basildon, outside London. Trading has become extraordinarily complex and opaque, with trading speeds no longer measured in minutes or seconds but in time units beyond human perception: milliseconds (thousandths of a second), microseconds (millionths), and even nanoseconds (billionths). By way of comparison, a millisecond is to a second as one second is to 11.6 days; and a nanosecond is to a second as one second is to 31.7 years. The blinking of the human eye takes about 400 milliseconds, and a nerve impulse reaches the brain in about 80 milliseconds—near eternities compared with the speed of modern communications and trading.

Technological advances have scaled up imperceptible and previously irrelevant time differences into operationally manageable and enormously profitable business opportunities for those with sufficient high-tech trading tools. These tools include the fastest private communication and trading lines, the most powerful computers, and sophisticated algorithms (algos) that are capable of speedily analyzing incoming news and trading data and determining optimal trading strategies in microseconds. High-tech trading also relies on possession of gigantic collections of historical and real-time market data. One Chicago-based market operator is said to possess a collection that contains “the rough equivalent of approximately 100 times the amount of data included in the Library of Congress.”[i] The storage, management, organization, and analysis of such big data require enormously costly and complex systems that only a small number of large operators can afford.

But there is another central factor that has contributed to the extraordinary complexity of capital markets: market fragmentation. At the dawn of the twenty-first century, the NYSE was the world’s preeminent equity market, listing companies from all over the globe. Today, the NYSE is no longer dominant; its overall share of the domestic market dropped from 80 percent to about 24 percent over the past decade.[ii] Trading in U.S. equity markets is now split between 12 public (also called “lit”) exchanges and many more offexchange trading venues, including about 40 so-called dark pools (see below) and over 200 internalizing broker-dealers.[iii] This fragmentation is a feature not only of equity markets but also of other markets, including options markets and foreign exchange markets. And the trend is global—fragmented capital markets are a growing reality in Europe as well as parts of Asia.

In this hyperfast fragmented global marketplace, algos battle algos for trading dominance (i.e., preferential execution position), and the most sophisticated trading supercomputers deal not only in securities but increasingly across asset classes, including futures, fixed income, currencies, and commodities, and across hundreds of markets and dozens of countries. A retired regulator with a distinguished 15-year record at the helm of two major financial regulatory organizations recently confessed to me that he no longer understands how these complex capital markets really work. The average investor is even more in the dark about these markets. When an investor sends an order to buy or sell a stock by the click of the mouse, the order may take a lightning journey through a maze of dark pools and exchanges before being filled. How does the investor know that on the journey to execution the order was treated fairly and was filled at the best available price? Adding to market complexity is the extraordinary explosion in order traffic—from millions of orders daily 10 years ago to many billions today.

A comprehensive examination of the functioning of these capital markets of today is opportune and should matter to all of us—for the health of these markets affects our savings and pensions and ultimately has profound implications for the general welfare as well as for equality and justice in society.

Some argue that the recent transformations have introduced, on the whole, greater efficiency through enhanced market competition, resulting in narrower spreads and reduced commissions, for the benefit of investors. Others, however, are sceptical. In a 2014 U.S. survey, a striking 70 percent of financial industry participants said that today’s capital markets are not fair to investors; only 18 percent felt they were fair.4 Many other recent surveys show a persistent majority of buy-side market participants (i.e., asset managers and managers of hedge funds, pension funds, and trusts) expressing negative views on overall market quality.

Telltale signs that all is not well occasionally make the newspaper headlines, including the Flash Crash of May 2010, when the U.S. equity markets dropped 9 percent in value, for no obvious reason, only to fully recover within 30 minutes, or the similarly dramatic and mysterious flash crash of the British pound in October 2016. Less noticed, however, are so-called mini flash crashes—large erratic price swings in individual stocks over milliseconds—which are a daily occurrence in today’s fragmented markets. According to one source, about 18,500 mini flash crashes occurred between 2006 and 2010 in U.S. stock exchanges alone.

These unfavorable opinions of the market and worrisome recent events need explanation. Are they linked to the recent changes that have taken place in the markets? Economists traditionally view markets as simple coordination systems that facilitate the efficient exchange of goods and services between buyers and sellers. This view is a helpful starting point for understanding how markets operate, but it is incomplete for understanding why they change and who benefits or loses from changes in market structure. In this book I explain the dramatic recent transformations and events in capital markets and assess how they affect core public policy objectives such as investor protection, as well as market transparency, fairness, and efficiency. I do this by offering a new analytical lens through which to view these events and transformations, based on a reconceptualization of markets.

Markets are more than simple coordination systems or “disembodied” meeting places of demand and supply. They are organizations governed by their own rules and regulation. Moreover, markets are deeply political organizations or governance systems where contending groups of members or stakeholders are frequently embroiled in intense battles to shape market rules and structure according to their own narrow preferences. These contending groups are not necessarily equal in power, and sources of power may quietly change over time, thereby altering bargaining power. In short, power politics must be at the heart of any analysis of markets. Power is central to explaining markets both in the sense that general power politics arguments about who wins or loses apply to market settings, and in the sense that markets themselves are political institutions governed by power relations.

This essay is an excerpt from Darkness by Design: The Hidden Power in Global Capital Markets by Walter Mattli.

[iii] An internalizing broker-dealer fills a client order by trading with the customer internally or in-house instead of by routing the order to an exchange or some other external trading platform.

Walter Mattli is professor of international political economy and a fellow of St. John’s College, University of Oxford. His books include The New Global Rulers: The Privatization of Regulation in the World Economy (Princeton).