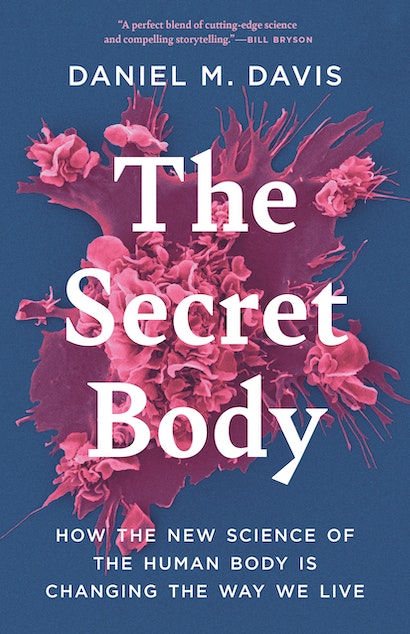 The Secret Body
Available in 4 editions
Buy This

Imagine yourself as an alien with an exceptionally powerful telescope trying to understand what happens on Earth. You come across a soccer match, but your telescope isn’t powerful enough to see the ball. You can make out a pitch with goals at each end, and players moving about, seemingly with some sort of organisation, but it’s hard to understand what is happening precisely. You publish the observation in the Alien Journal of Earth Science. A few other aliens email you congratulations, but only a few.

In time, alien telescopes improve, and then occasionally you see one of the players in front of one of the goals fall over. Sometimes this is followed by the crowds of people around the pitch waving and cheering. It still doesn’t make much sense, but leads to discussion at the bar during the Alien Congress of Earth Science, and your research funding is renewed. Eventually, when you are much older, a younger alien working with you notices something especially intriguing. When the player in front of the goal falls over, whether or not the crowd cheers seems to depend on one thing: whether or not the net bulges outwards. This leads your younger colleague to have a brilliant idea.

While others might have dismissed the observation without thinking very deeply about it, she wonders if there might be something there which causes the net to bulge – a ball – but it’s just too small to see. At first you don’t believe her, but the idea grows on you. With a ball, everything else starts to make sense: the movements of the players, the net, the cheers, the whole game, and in time other aliens agree, there has to be a ball there. Even though nobody can see the ball directly, everyone agrees it’s there because so many things make sense if it is. You, your colleague and the alien who invented the super-powerful telescope collect many prizes, and everyone wants to be your friend.

Alien telescopes might improve again so that the ball is eventually seen. But equally, this might not happen. A heavy weight of evidence suggests the ball is there, but there may be no direct proof. At some level, it’s debatable whether anything can ever be proven absolutely: there is no way of proving the sun will rise again tomorrow, just a heavy weight of evidence that says it will.

This tale of aliens and sport reflects how many discoveries are made. Take, for example, the discovery of the planet Neptune, first seen in 1846. The movement of another planet, Uranus, had been carefully tracked, and mathematical calculations showed that it didn’t quite follow a simple orbit around the sun. This could be explained if an unseen planet was pulling on Uranus to influence its path. British and French astronomers calculated where such a planet would have to be located if it were to account for the distortion in the movement of Uranus. Then, with a telescope pointed precisely at the predicted place, the new planet was seen – Neptune. Today, a substance called dark matter and a force called dark energy are predicted to exist in order to explain the movement of stars and galaxies. As yet, both remain unseen.

Throughout almost all of history, most wonders of the human body have been hidden from view and barely imaginable. Some of our inner anatomy – bones, muscles and a few major organs – has always been available to scrutiny (albeit with a bit of delving beneath the skin), but the vast majority of our body’s secrets have, until relatively recently, been the stuff of hypothesis and speculation. The discovery of cells made possible by the invention of the microscope in the late seventeenth century presaged the beginning of our modern understanding of human biology, and the discovery of the structure of DNA in the middle of the twentieth century was another gargantuan step forwards as it revealed how genetic information is stored and replicated. Most recently, however, a whole series of technological and scientific revolutions have taken place that are revealing hidden landscapes within the human body as never before – confirming some hypotheses, undermining others and, above all, leading to a whole new realm of possibilities, both theoretical and practical.

What we are learning is that the human body is a world full of other worlds. Every organ is a menagerie of cells, and each cell has its own inner cityscape of scaffolds, capsules and monorails, all fabricated from a bewildering array of biological building materials: proteins, sugars, fats and other chemicals. Our raw materials are nothing special – oxygen, carbon, hydrogen and a sprinkling of other elements – but, put together in an exceptional way, these raw elements create a body that is conscious, self-healing and capable of poetry. We know of nothing else quite like us in the universe; there may be nothing else like us in the universe. Surely nothing can be more profound or enlightening than understanding how we work. And new instruments and tools, from microscopes to complex data analytics, are providing this understanding by peeling back layers of the body like never before.

Of course, all science has an ever-increasing impact on our lives, but nothing affects us as deeply or as directly as new revelations about the human body. There are any number of examples: analysis of our genes presents a new understanding of our individuality; the actions of brain cells give clues to how memories are stored; new structures found inside our cells lead to new ideas for medicine; molecules found to circulate in our blood change our view of mental health.

This book explores the recent breakthroughs in human biology that, I will argue, are vital to our future. Any number of frontiers can be considered important, but I will consider six which are unquestionably thrilling and especially impactful: the individual cell, the embryo, the body’s organs and systems, the brain, the microbiome and the genome. Some of these topics you may have encountered before. If so, I hope to show how new details have recently come to light that are radically changing our understanding and capability. Other topics you may not have heard of, but are every bit as vital and game-changing as the ones that grab newspaper headlines. And at each frontier, I will show how new discoveries look set to change, or have already changed, our day-to-day lives, not to mention our overarching sensibilities and aspirations. By gathering them together in this way, I want to show that we are at the dawn of an enormous, sweeping sea change in how we live our lives. It is not self-driving cars or robots that are going to have the biggest impact on us in the foreseeable future: it’s new human biology.