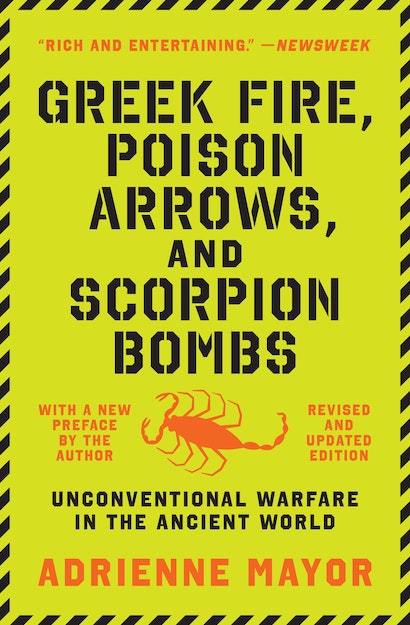 Flamethrowers, poison gases, incendiary bombs, the large-scale spreading of disease: are these terrifying agents of warfare modern inventions? Not by a long shot. In this riveting history of the origins of unconventional war, Adrienne Mayor shows that cultures around the world have used biological and chemical weapons for thousands of years—and debated the morality of doing so. Drawing extraordinary connections between the mythical worlds of Hercules and the Trojan War, the accounts of Herodotus and Thucydides, and modern methods of war and terrorism, this richly illustrated history catapults readers into the dark and fascinating realm of ancient war and mythic treachery.

What questions drove your research for a book on unconventional warfare in antiquity?

AM: I begin by asking, How deep are the origins of biological and chemical weapons? Most people believe that such arms require sophisticated modern science and advanced delivery systems. And historians have assumed that ancient codes of war banned biological weapons.

But I found compelling evidence to show that warfare by biological and chemical means is more ancient than anyone had realized. The concept is embedded in language itself—the word “toxic” derives from the ancient Greek word for bow—and poison arrows were featured in Greek myths and Homer’s epic poems about the Trojan War. Projectiles tipped with toxic plant juices and snake venom, spreading contagion, deploying dangerous animals, catapulting stinging insects, creating choking gases and hurling petroleum combustibles—these are just a sample of the myriad noxious agents actually used in historical battles in Greece, Rome, Anatolia, Mesopotamia, Persia, India, and China.

Why study the ancient history of biochemical warfare?

AM: The evidence from the ancient world shatters the notion that biological and chemical warfare is a modern phenomenon—or that ancient rules of war ever ensured honorable and fair combat.

Notably, the rationalizations for resorting to unfair weapons and tactics expressed in antiquity are the same reasons given today. The age-old problems of controlling unpredictable biological agents and toxic materials, avoiding unintended consequences, and resolving moral issues are even more urgent today, with unprecedented and relentless advances of science in the service of war, compounded by global pandemics and terrorism.

What are the sources for biological and chemical weapons in antiquity?

AM: Over 3,000 years of biological and chemical warfare—both intent and practice—are documented in more than 50 ancient writings from Europe to China, including, for example, Hittite cuneiform tablets, the Old Testament, Herodotus, Thucydides, Aeneas the Tactician, Polyaenus, Tacitus, Diodorus,  Pausanias, Lucan, Plutarch, Pliny the Elder, Kautilya’s Arthashastra, Laws of Manu, and Sun Tzu.

Do we have any archaeological evidence for biological or chemical weapons?

AM: By its nature, evidence for biological weapons is ephemeral. But archaeological evidence for chemical weapons has come to light. Naphtha firepots are depicted in Assyrian reliefs as early as the ninth century BC. Archaeologists in India recently discovered chemical fireball used against Alexander the Great in 327 BC. At a fortress in Syria, archaeologists analyzed evidence of sulfur dioxide gas created during a siege in AD 256. Thick-walled, sphero-conical ceramic vessels are common artifacts in the Near East and Egypt. New chemical analyses of internal residue show that these were explosive hand grenades made from volatile substances used against Crusaders.

What was Greek Fire? Is the recipe really lost?

AM: My book explains how centuries of experiments with the powers of petroleum in the Mideast culminated in the invention of Greek Fire in the seventh century AD. Originally a naval weapon, Greek Fire clung to ships sails and victims like fiery glue. Water only accelerated the flames. Somehow, volatile naphtha was distilled, thickened with resin or wax, mixed with quicklime and sulfur, and stored under pressure. The precise formula of the ammunition matters less than the amazing delivery system, which was capable of shooting streams of liquid fire from swiveling nozzles mounted on small boats. All this was achieved without thermometers, safety valves, and pressure gauges. The ancient recipe for Greek Fire is lost but napalm, based on the very same ingredients, is the modern equivalent.

AM: Can you give a preview of what has been added to this new revised edition?

I have added more historical instances of unconventional warfare and poison weapons from the Greek and Roman world, Persian and Islamic cultures, India, China, Japan, and the Americas. There is new material on ancient and modern military ethics. I also include the most recent scientific developments in creating and countering biochemical agents and tactics, to show how our advanced modern weapons had antecedents in antiquity, from spreading disease and enlisting animal allies to creating devastating incendiaries and unbearable sound waves. Even the emerging field of nuclear semiotics was foreshadowed in the ancient Greek myth of the Hydra whose venom tipped Heracles’ poison arrows. Indeed, the monstrous Hydra with its multiplying heads is a perfect symbol for the never-ending unexpected consequences and blowback threats for all who resort to biological and chemical weapons.

There are also three new maps, fifteen new images, and ten color plates. New illustrations include the skeleton of a soldier in chain mail who was killed by poison gas 1,700 years ago, an X-ray of a clay pot filled with live scorpions like those used against the Romans, examples of toxic plants used in ancient warfare, an Assyrian war dog, birds and cats as involuntary suicide bombers, the use of flaming naphtha to defend a fortress, and a naval battle with Greek fire.

What surprised you most in researching this book?

Another surprise was that the ancient myths about poison weapons not only anticipated the practical problems of self-injury and friendly fire that still plague the use of biological armaments, but they also pondered the ethical dilemmas that we grapple with today.

One sobering result of writing this book is the realization that there was no time or place when biological weapons were unthinkable. But I was also heartened to find that moral doubts about unscrupulous methods of war arose as soon as the first archer dipped his arrow in poison.

Adrienne Mayor is the author of The Poison King: The Life and Legend of Mithradates, Rome’s Deadliest Enemy, which was a finalist for the National Book Award, Gods and Robots: Myths, Machines, and Ancient Dreams of Technology, and The Amazons: Lives and Legends of Warrior Women across the Ancient World (all Princeton). She is a research scholar in classics and the history of science at Stanford University.