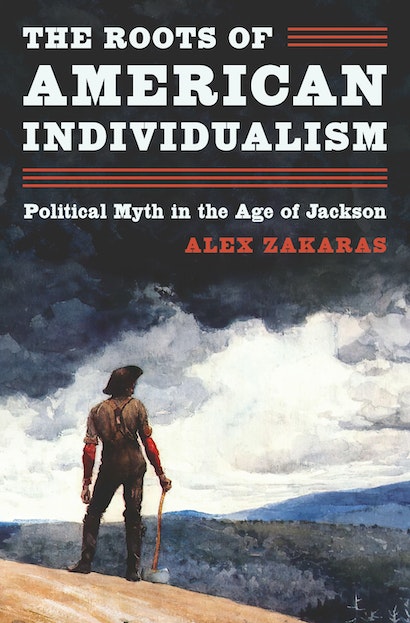 The Roots of American Individualism
Available in 2 editions
Buy This

Individualism is a defining feature of American public life. Its influence is pervasive today, with liberals and conservatives alike promising to expand personal freedom and defend individual rights against unwanted intrusion, be it from big government, big corporations, or intolerant majorities. The Roots of American Individualism traces the origins of individualist ideas to the turbulent political controversies of the Jacksonian era (1820–1850) and explores their enduring influence on American politics and culture.

What are political myths, and what led you to focus on them in this book?

AZ: Broadly speaking, political myths are widely accepted stories that help us make sense of political events and experiences. In the book, I focus on a certain kind of political myth, which I call foundational myth. A foundational myth paints a glorified portrait of the nation and its people. It tells a story of national origins that explains who its people are and who they are meant to be. It often does this by contrasting them to some threatening other—some antagonist or rival, or some source of pollution or decay.

For example, one of the foundational myths I explore in the book is the myth of the self-made man. This longstanding myth tells us a story about what America is and who Americans are. America, it says, is a land of limitless opportunity founded by those fleeing hierarchy and oppression in the Old World. For over two hundred years, this myth has taught us that our country is uniquely fluid and classless and that individuals invariably get ahead through hard work, ingenuity, and perseverance. It tells us, moreover, that Americans are a bold and enterprising people with the resolve and self-discipline to chart their own course in the world.

I chose to focus on foundational myths because they are such powerful forces in our politics and culture—and because they haven’t gotten enough attention from historians and political theorists. Like religious myths, foundational myths help us find meaning in the world and a sense of shared identity and purpose. In doing so, they shape our political beliefs, making us receptive to certain political viewpoints and instinctively resistant to others. So if we want to understand why Americans believe what they do about politics, these myths are a good place to start.

Why do you describe the Jacksonian Era as the “crucible” of American political myths?

AZ: The Jacksonian Era was a time of tremendous upheaval and change. One key change was political: it was during this time that mass democracy was born. People often forget that the American founders were no great admirers of democracy. They believed in property qualifications for the vote, they abhorred political parties and electioneering, and most of them hoped that ordinary people would, by and large, leave the business of governing to more “enlightened” elites.

By the Jacksonian Era, these views had been swept away by a rising tide of populist, egalitarian sentiment. Property qualifications had given way to universal white male suffrage, and the first mass political parties were born. The leaders and organizers of these new parties began reformulating the patrician ideals of the American founding for this new, more democratic age. Meanwhile, a vast expansion of the country’s print culture was bringing cheap newspapers into American homes and giving wide reach to partisan ideologies. These circumstances facilitated the rise and popularization of a powerful set of national myths that celebrated the freedom and self-reliance of the ordinary white farmer, settler, and craftsman. The book focuses on three of these myths in particular: the myth of the independent proprietor, the myth of the rights-bearer, and the myth of the self-made man.

You emphasize the white supremacist fervor that shaped Jacksonian politics. How does this relate to your main theme?

AZ: American individualism was—and still is—deeply entangled with racial and gender hierarchy. In Jacksonian America, the free individual celebrated in the nation’s mythology was almost always a white man, and the broad freedom he asserted included the freedom to subordinate women, to expropriate Native American lands, and to enslave and oppress Black Americans. In recent decades, historians have written a lot about the construction of white identity during this period, and how individualistic traits—including rationality, self-reliance, and self-discipline—were assimilated into the ideas of whiteness and masculinity. At the same time, these traits were denied to women and people of color, who were continually represented as naturally irrational, dependent, and undisciplined. For many Americans at the time, asserting individualist ideals was therefore a way of justifying the exclusion and oppression of women and people of color.

The book explores the religious origins of American individualism in some detail. How exactly did Protestant religion contribute to the rise of individualistic ideas and myths?

AZ: This is a complicated question, so let me focus on just one aspect of it. As I immersed myself in the newspapers, political speeches, and sermons of the Jacksonian Era, I was struck by the ardent free-market rhetoric that was already circulating there. Jacksonian Democrats in particular had the habit of describing the market as a natural phenomenon—its laws akin to the laws of physics. At the same time, they presented government as an artificial entity, which was constantly intruding and upsetting the market’s natural equilibrium. So I set out to uncover the origins of this view.

It turns out that early American economists and their popularizers were drawing heavily on an idea called natural religion: the belief that God had created the world using a harmonious and benevolent plan that could be discovered through reason. Free market enthusiasts during this period tended to believe that economic laws were features of this divine creation and that if they were left alone, they would bring not just prosperity and individual freedom but also fairness: that is, the market would reward the virtuous and punish the lazy and dissolute. One striking implication of this view, which is spelled out explicitly by Democratic editors and pamphleteers, is that interfering with the free market is something akin to heresy. This powerful fiction, which presents government as an ungodly meddler in the naturally harmonious economic domain, has shaped American politics for centuries, and it’s still with us today.

You are very critical of American individualism in the book, but you don’t reject it—why not?

AZ: Let me offer two answers to that question. First, American individualism is a surprisingly diverse and malleable constellation of ideas. That’s the good news in the book. Although it has often been used to rationalize profound inequality and harsh exclusion, individualism also has powerful egalitarian strains. Many abolitionists, for example—Black and white alike—defended a deeply compelling ideal of human rights. They asserted the moral dignity and equality of all men (and in some cases, women too). And they interpreted individual rights in broad and innovative ways. They argued that everyone had a right, not just to be shielded from oppression and discrimination, but also to enjoy the opportunities that would allow them to unfold their talents and shape the course of their own lives. In my view, such expressions of American individualism are worth preserving and defending.

My second answer is that I don’t think we can afford to reject American individualism. The mythology of American freedom remains a powerful political resource today. Those who successfully present themselves as its standard bearers win a significant political advantage. So as we confront the deep crises of our age—including rising threats to democracy and vast economic and political inequalities—we cannot afford to cede this resource to right-wing oligarchs and chauvinists. We have to tell our own alternative story of American freedom that points toward equality and inclusion.

Alex Zakaras is associate professor of political science at the University of Vermont and the author of Individuality and Mass Democracy: Mill, Emerson, and the Burdens of Citizenship. He lives in Burlington, Vermont.