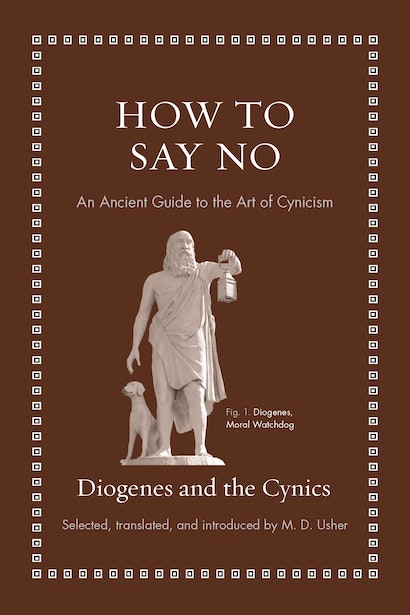 How to Say No
Available in 2 editions
Buy This 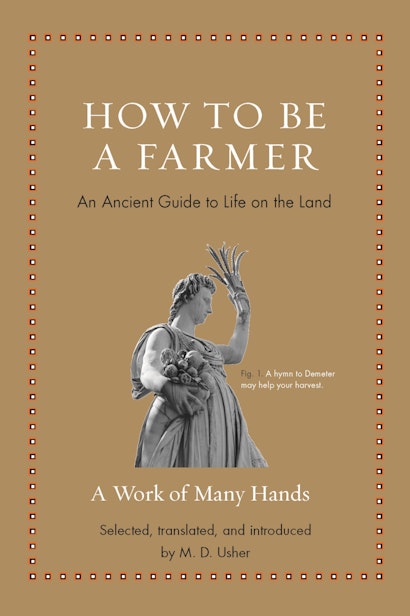 How to Be a Farmer
Available in 2 editions
Buy This

Mark Twain once quipped “Heaven goes by favor. If it went by merit, you would stay out and your dog would go in.” Twain, of course, had my Fido or your Fluffy in mind, and on that score, he was entirely correct. But he could just as well have been talking about the Cynics, the dog philosophers of ancient Greece, whose merit is the kind we need more than ever these days, not for Heaven, but for the here and now.

The word Cynic, meaning “dog-like” in Greek, was a nickname conferred upon Diogenes of Sinope (412-323 BCE) and his followers by their detractors because, in pursuit of the good life, these freedom-seekers lived out-of-doors and, like stray dogs, got their food from ancient dumpsters and by begging. What is more, they did all their private business in public view—the whole gamut of activities, from defecating to copulating. To watch the Cynic power couple Crates and Hipparchia perform their conjugal duties in the streets of Thebes, for example, proved quite an attraction to passersby. When some Athenian hooligans once tossed Diogenes a bone as if he were a dog, he, in turn, like a dog, lifted his leg and pissed on them. With characteristic self-effacing irony, the Cynics wore their moniker as a badge of honor, casting themselves as their cities’ moral watchdogs, barking truth from the sidewalks and nipping at the heels of the nastiest folks in town.

The Cynics were careful observers of human nature and could not abide what they saw there, in others and in themselves: namely, a tendency to luxury, ambition, stupidity, cruelty, and greed. They responded to this realization by dropping out of polite society. They sought to be liberated from the shackles of social expectations and tried to see life as it really is, and things as they really are. Their public stunts thus served the serious purpose of heightening awareness of what is truly virtuous and worthwhile and what is merely conventional. Nature, not Culture, was their yardstick. Their objective in living was to need as little as possible and to want even less than that. The Cynics were not the world’s first ascetics, to be sure, but they have given us that word–from Greek askēsis, which means “practice” or “training.” The metaphor is drawn from the realm of ancient Greek athletics. Getting by on just a little is a form of exercise, they argued, that will strengthen you and make you impervious to the buffetings of misfortune. Beat calamity to the punch was their strategy for living. Diogenes thus made a habit of begging from statues. When asked why, he replied, “To get good at being refused.”

2022 marks the 50th anniversary of the book The Limits to Growth. That landmark indictment of human overreach and excess, first published in 1972 and updated every five years since, is a bible of the environmental movement. In our new climatic regime of global heating, it remains scripture still, even if not infallible on the finer detail. The book’s authors, the late Donella Meadows and her fellow researchers at MIT via The Club of Rome, used systems modeling to demonstrate that while rates of increase in the world’s population, pollution levels, and depletion of natural resources are fundamentally exponential in nature, our technological capacity to remediate these problems is confined to a linear trajectory. To put it another way: We will never catch up. We must, therefore, slow down. The Cynics have something to teach us here. They are the gurus of degrowth. Here are a few examples to consider from their oeuvre.

The Cynics had a perverse way of arguing a point. A syllogism they were fond of employing to justify their squatting on the steps of temples and sanctuaries, for example, went like this:

That, of course, is (mostly) a cheeky gibe at syllogistic logic. But the Cynics’ specious reasoning could take a more serious turn, too, as one ancient biographer recounts: “Diogenes used to say that since the gods need nothing, the god-like should need only a little.” The end game of the Cynics’ less-is-more approach to self-actualization is on full display in this ancient summary of their delightfully circuitous thinking: “Even the despising of pleasure is itself most pleasant once it’s become a habit,” Diogenes was keen to point out. “Just as those who’ve gotten accustomed to a pleasant life become miserable when they pass over to the opposite condition, so those persons whose training has been the opposite from theirs enjoy despising pleasures with more pleasure than the pleasures themselves.” Capeesh?

Put Up and Make Do

The Cynics lived frugally and ate food primarily for the sake of nutrition. Some Cynics were vegetarians and drank only cold water to boot. To someone who asked Diogenes at what hour one should eat lunch he said, “If rich, whenever you want; if poor, whenever you can.” Diogenes is popularly remembered as having lived in a tub or barrel. In fact, his abode was a large terracotta storage jar or pithos. Since pithoi were used to bury the dead, this choice of accommodation not only advertised Diogenes’s frugal lifestyle it was also a statement of the philosophical view that life is a rehearsal for death.

The Cynics well understood what economists now call “externalities,” or the harmful side-effects and human/environmental costs involved in the production and acquisition of goods. In a dialogue attributed to the satirist Lucian of Samosata an unnamed Cynic likens the god in charge of this world to a host at a dinner party:

The god is like a good host: He places before us a variety of many kinds of dishes so that we have what is appropriate for us—some things for the healthy, some for the sick, some for the strong, some for the weak—not so that we all may use everything, but so that each of us might use for ourselves what falls in our domain and, of those items, what we happen to need most.

“Whereas you,” the Cynic continues, addressing his interlocuter,

are exactly like a person who grabs everything out of greed and lack of restraint. You think it’s fine to use it all, including goods from all over and not just what you have close to hand. You don’t think your own land and sea are enough in themselves but import your pleasures from the corners of the globe and always prefer what is foreign to what is produced locally, what is costly to what is inexpensive, and what’s hard to procure to what’s easily acquired … The many costly goods you think conducive to your happiness, over which you exult, only come to be yours through misery and suffering. That gold you pray so hard to get your hands on, the silver, the expensive houses, the finely tailored clothing, and all the accoutrements that go along with these things: How much do they cost in trouble? How much in human labor and danger, or rather, in human blood, death, and destruction? Many people are lost at sea for the sake of these things and the people who go in search for or manufacture them suffer terribly.

The recognition of externalized costs and the preference for local goods and services over products sourced from afar enlarges on the meaning of cosmopolitanism, another word and concept the Cynics invented: The consequences of our choices, and thus our obligations to our environments and to one another, extend far and wide, and in many directions. We are inescapably “citizens of the world” and must behave as such.

Long before latter day capitalism corrupted nearly every kind of human transaction, Demetrius, a Cynic active at Rome in the time of the emperor Nero, saw through the phantom economy of what are euphemistically called financial instruments, upon which endless, unlimited growth is predicated. “Written certificates, IOUs, and contracts,” Demetrius exclaims, “are empty images, devoid of real ownership.” “What are these things?” he continues. “What is ‘profit,’ ‘an account book’, and ‘interest’ apart from names made up for human greed that exceeds the bounds of Nature? Time itself put up for sale!” In suggesting that the moneylender is selling time, an entity that belongs to the Universe alone, Demetrius may well be the first to employ what later became a topos against usury. What he might have said about the obscene amounts of debt accrued in industrialized countries and the absurd legal definition of the modern corporation as a person (with all rights and benefits appertaining, but with none of the responsibilities) one can only imagine.

The concept of “appropriate technology” was developed by E. F. Schumacher, author of Small Is Beautiful: Economics as if People Mattered (1973), another classic of environmentalism, in the 1950s and 60s while he was working as chief economist for the British National Coal Board and as a consultant to former British colonies in South Asia. He was heavily influenced by the approach to economic self-sufficiency championed by Mohandas Gandhi. Schumacher himself used the term “intermediate technology,” by which he meant a technology superior to inefficient, rudimentary tools and practices, yet one “simpler, cheaper and freer than the supertechnology of the rich.” The thrust of the idea is never to use more than you need, of either labor or materials, to get a job done. Diogenes seems to have anticipated him in this. As one ancient biographer describes his revelation:

Once, after observing a child drink water from his hands, Diogenes hurled his cup from his knapsack, saying “A child has vanquished me in simplicity!” He tossed out his bowl, too, when he saw in like manner a child who had broken his plate take his lentils in a hollowed-out hunk of bread.

In our age of wasteful, unneeded, energy-consuming gadgets appropriate technology is the ticket out of town.

In 2016 an anonymous twenty-six-year-old with the handle “Kind-hearted Traveler” quit the drudgery of his factory job in China and posted a short manifesto online explaining his decision. The subject heading, tang ping, or “lying down flat,” recommends the exact opposite posture one inevitably must assume to work in a factory. “Lying down flat is justice,” he wrote, starting therewith a protest movement among Chinese youth against the nine-to-nine, six-days-a-week work regimen known as 9-9-6. But tang ping is more than that. The Kind-hearted Traveler cycled from his home in Sichuan to Tibet to do some soul-searching. He gets by, he tells us, working odd jobs, eats only two meals a day, and spends the rest of his time reading philosophy: “I can just sleep in my barrel enjoying a sunbath like Diogenes, or live in a cave like Heraclitus and think about Logos.” Indeed! The episode he refers to, about Alexander the Great coming to visit Diogenes and offering to grant him anything he might want, to which Diogenes, in repose beside his pithos, requests only that the Great King step out of his sunlight, is perhaps the signature Cynic gesture. How does one sunbathe except by lying down flat? Perhaps less well-known is that Diogenes took tang ping to his grave. One ancient account says he died peacefully by holding his breath, aged 90, lying down flat in a grove of cypress trees just outside Corinth.

This article first appeared in the Idler magazine.

Ideas Podcast: How to Say No