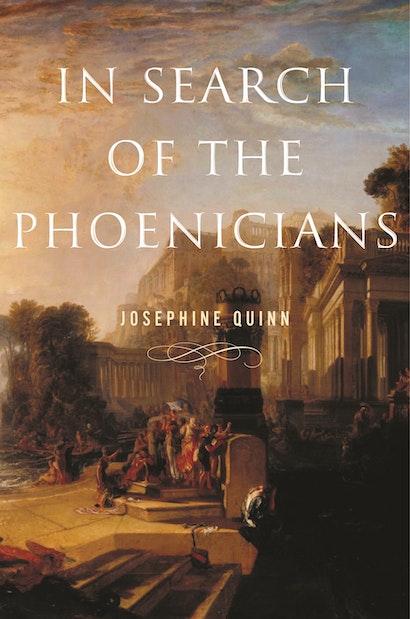 In Search of the Phoenicians
Available in 3 editions
Buy This

The Phoenicians were, according to one ancient scholar, ‘the first to plough the sea’. The little ports of the Bronze Age Levant, including Tyre, Sidon, and Byblos, lay between the great empires of Egypt, Anatolia, and Mesopotamia. They ferried goods and gifts along the coasts between them, and submitted their allegiance to one or another ‘Great King’ according to the ever-changing balance of power. When this international system of wealth and power, collapsed in the late second millennium, they survived. They were now alone, however: without overlords, but also without call on their services as merchants and mediators, without the raw materials they needed for their workshops, and without markets for the goods that they produced.

They turned to their most constant companion, the sea. For the first time now they headed west. Refining the arts of shipbuilding and navigation, they picked up the old ‘Route of the Islands’ that had led their Cypriot neighbours to Crete and Sicily and on to Sardinia, and they ventured further. Phoenician ships reached Iberia and then looped around to return east with the winds and currents along the coast of the Maghreb. They visited new lands rich in metals, made new friends, and by about 900 BCE they had battled their way through the ‘Pillars of Hercules’—the Rock of Gibraltar and Jebel Musa—and out into the Atlantic Ocean.

In time they established their own permanent outposts in local towns, and on empty capes islands, most famously of all at what would become the great western city of Carthage. A string of safe harbours sprang up all around the Mediterranean to take them out to the Atlantic and back home again, to their increasingly wealthy cities. Not everyone who used these routes was on business: people from Levantine cities also ploughed the sea as pirates, pilgrims, and refugees. And over time people from other places joined them on the water, people who spoke other languages, Etruscan, Sardinian, and above all Greek. These sailors wove between them a web of relationships all across the Mediterranean.

It was Greek-speakers who named their illustrious predecessors Phoenician. We don’t know what these people called themselves, or if they identified with any group larger than their own city-state. The name chosen for them meant red or purple—probably not a reference to their skin-colour but to their flagship maritime industry, which turned the innards of billions of sea snails into precious drops of purple dye. But Greek authors don’t use the term to point to a place called Phoenicia. Instead they used it for other sailors, travellers from all over the wider Levant who spoke not just a different language, but a different kind of language. When Greek authors talk about these same sailors on land, they talk about them in terms of specific cities, cities they knew and admired. So for Homer a beautiful silver bowl is made in Sidon but carried by ‘Phoenician men’ across the sea. Where these Phoenicians come from isn’t as important as their journeys.

We are now very used to what has been called a ‘cartographic’ view of the world, looking down on a map, or from a plane, and focussing on masses of land or sea. In antiquity, people looked not down but out, and they navigated by markers not by maps. Space was thought of in terms of the routes through it, not lines around it—a worldview we are getting used to again with the ‘maps’ apps on our phones, which don’t actually provide us with maps of the areas we travel through but highlight instead the road to follow.

The Phoenicians had a second wind as well, out in the Atlantic. Just as nation states were beginning to emerge in the sixteenth century CE, they become unexpected national heroes, first in Britain and then in Ireland. These were islands that as far as we know ancient Phoenician sailors never reached, but they were lands looking for origin myths. Some British scholars looked to King Arthur, other to the Trojans. And some hit on the notion that it was actually the Phoenicians who originally colonised Britain, or that Phoenician settlers in the South combined with Germanic settlers in the North: this explains, one author tells us, why the Scots are so much larger and fiercer than the English. The connection with the Phoenicians was particularly useful for the British in the seventeenth century because it differentiated them from their great enemies the French, who were always more associated with the Romans as a land-based, territorial power, while the Phoenicians, like the British, were famous sailors with a maritime empire. In Ireland by contrast an imagined relationship constructed with the Phoenicians in the eighteenth century was all about a very real relationship with Britain: the idea that the Irish were descended from Phoenicians cast the British occupation of Ireland in terms of the great struggle during the Punic Wars between sophisticated, noble Carthage and the savage imperial power of Rome.

This tells us plenty about early modern Britain and Ireland, but it leaves the Phoenicians themselves out of sight, just over the horizon. If we want to understand them better, I suggest in my book, we need to abandon any attempt to do so in ethnic or national terms, and embrace the misty edges of the communities they created as part of the web and weft of ancient life, and the constant half-seen hum of the ancient sea.