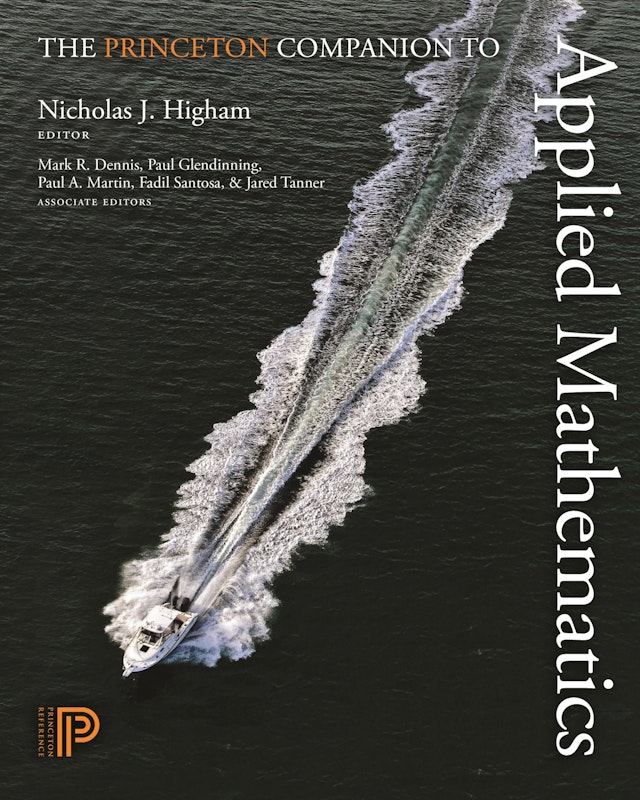 We are excited to be running a series of posts on applied mathematics by Nicholas Higham over the next few weeks. Higham is editor of The Princeton Companion to Applied Mathematics, new this month. Recently he took the time to answer some questions about the book, and where the field is headed. Read his popular first post on color in mathematics here.

What is Applied Mathematics?

What is the purpose of The Companion?

NH: The Companion is intended to give an overview of the main areas of applied mathematics, to give examples of particular problems and connections with other areas, and to explain what applied mathematicians do—which includes writing, teaching, and promoting mathematics as well as studying the subject. The coverage of the book is not meant to be exhaustive, but it is certainly very broad and I hope that everyone from undergraduate students and mathematically interested lay readers to professionals in mathematics and related subjects will find it useful.

What is an example of something aspect of applied mathematics that you’ve learned while editing the book?

NH: Applied mathematics is a big subject and so there are many articles on topics outside my particular areas of expertise. A good example concerns applications of computational fluid dynamics in sport. An article by Nicola Parolini and Alfio Quarteroni describes the mathematical modeling of yachts for the America’s cup. The designer wishes to minimize water resistance on the hull and maximize the thrust produced by the sails. Numerical computations allow designs to be simulated without building and testing them. The article also describes mathematical modeling of the hi-tech swimsuits that are now banned from competition. The model enables the benefit of the suits on race times to be estimated.

The Companion is about 1000 pages. How would advise people to read the book.

NH: The book has a logical structure, with eight parts ranging from introductory material in Part I, the main areas of applied mathematics in Part IV (the longest part), through to broader essays in the final part. It is a good idea to start by reading some of the articles in Part I, especially if you are less familiar with the subject. But a perfectly sensible alternative approach is to select articles of interest from the table of contents, read them, and follow cross-references. Or, you can just choose a random article and start reading—or simply follow interesting index entries! We worked very hard on the cross-references and index so an unstructured approach to reading should lead you around the book and allow you to discover a lot of relevant material.

What was the hardest thing about editing The Companion?

NH: The hardest aspect of the project was ensuring that it was completed in a reasonable time-frame. With 165 authors it’s hard to keep track of everything and to to ensure that drafts, revisions, and corrected proofs are delivered on time.

How much of the book did you write?

NH: I wrote about 100 of the 1000 pages. This was great fun, but it was some of the hardest writing I’ve done. The reason is partly that I was sometimes writing about topics that I don’t normally write about. But it was also because Companion articles are quite different from the papers I’m used to writing: they should have a minimal number of equations and formal statements of theorems, lots of diagrams and illustrations, and no citations (just Further Reading at the end of the article).

How did you choose the cover?

NH: We considered many different ideas. But after a lot of thought we settled on the motor boat picture, which captures the important topics of fluid mechanics, waves, and ocean, all of which are covered in the book in a number of articles.

What is the most unexpected article?

NH: Perhaps the article Mediated Mathematics: Representations of Mathematics in Popular Culture and Why These Matter by sociologist of education Heather Mendick. She discusses the way mathematics is represented in numerous TV shows and films.

What would you be doing if you hadn’t become a mathematician?

NH: I’d be playing a Hammond B3 organ in a jazz or blues band. I’m a keen musician and played keyboards semi-professionally for many years, starting in my teens.

How did you go about organizing the book?

NH: I recruited five Associate Editors with expertise in different areas and we met and planned out the eight parts of the book and the articles, along with a list of authors to invite. We looked for authors who are leading international experts in their field and are at the same time excellent expositors. Signing up the 165 authors was quite a long process. We were able to find authors for almost every article, so just a very small number had to be dropped. In some cases the authors suggested changes of content or emphasis that we were happy to agree with.

What range of readers is The Companion aimed at?

NH: The target audience for The Companion is very broad. It includes mathematicians at undergraduate level or above, students, researchers, and professionals in other subjects who use mathematics, and mathematically interested lay readers. Some articles will also be accessible to students studying mathematics at pre-university level.

Why not just seek information online? Why is there a need for a book?

NH: When Princeton University Press asked me to edit The Companion they told me that reference books still have great value. Many people have trouble navigating the vast amount of information available online and so the need for carefully curated thematic reference works, written by high calibre authors, is as great as ever. So PUP’s experience is that print is definitely not dead, and indeed my own experience is that I have many books in PDF form on my computer, but if I want to read them seriously I use a hard copy.

How have you ensured that the book will not go out of date quickly?

NH: This was a major consideration. This was a five and a half year project and we wanted to make sure that the book will still be relevant 10, 20, or 50 years from now. To do that we were careful to choose articles on topics that have proven long-term value and are not likely to be of short-term interest. This is not to say that we don’t cover some relatively new, hot topics. For example, there are articles on compressed sensing (recovering sparse, high-dimensional data from a small number of indirect measurements) and on cloaking (hiding an object from an observer who is using electromagnetic, or other, forms of imaging, as in Harry Potter or Romulan space ships in Star Trek), both of which are areas that have grown tremendously in the last decade.

What sort of overview of applied mathematics does the book give?

Where is the field going?

NH: Prior to the 20th century, applied mathematics was driven by problems in astronomy and mechanics. In the 20th century physics became the main driver, with other areas such as biology, chemistry, economics, engineering, and medicine also providing many challenging mathematical problems from the 1950s onwards. With the massive and still growing amounts of data available to us in today’s digital society information, in its many guises, will be an increasingly important influence on applied mathematics in the 21st century.

To what extent does The Companion discuss the history of applied mathematics?

NH: We have an excellent 25-page article in Part I titled The History of Applied Mathematics by historians of mathematics June Barrow-Green and Reinhard Siegmund-Schultze. Many articles contain historical information and anecdotes. So while The Companion looks to the future it also gives an appreciation of the history of the subject.

How do you see the connections between applied mathematics and other disciplines developing?

NH: Applied mathematics is becoming ever more interdisciplinary. Many articles in The Companion illustrate this. For example,

What are you thoughts on the role of computing in applied mathematics?

NH: Computation has been a growing aspect of applied mathematics ever since the first stored program computer was invented here in Manchester. More and more it is the case that numerical computations and simulations are used in tandem with, or even in place of, the classical analysis that relies just on pen and paper. What I find particularly interesting is that while the needs of mathematics and of science in general have, naturally, influenced the development of computers and programming languages, there have been influences in the other direction. For example, the notation for the ceiling and floor functions that map a real number to the next larger or smaller integer, respectively, was first introduced in the programming language APL.

Of course numerical computations are expressed in terms of algorithms, and algorithms are ubiquitous in applied mathematics, and strongly represented in the book.

Do you have any views on ensuring the correctness of work in applied mathematics?

NH: As the problems we solve become every more complicated, and the computations we perform run for longer and longer, questions about the correctness of our results become more important. Applied mathematicians have always been good at estimating answers, perhaps by an asymptotic analysis, so we usually know roughly what the answer should look like and we may be able to spot gross errors. Several particular aspects of treating correctness are covered in The Companion.

Uncertainty quantification is about understanding how uncertainties in the data of a problem affect the solution. It’s particularly important because often we don’t know the problem data exactly—for example, in analyzing groundwater flow we don’t know the exact structure of what lies under the ground and so have to make statistical assumptions, and we want to know how these impact the computed flows.

A different aspect of correctness concerns the reproducibility of our computations and treats issues such as whether another scientist can reproduce our results and whether a computation on a high-performance computer will produce exactly the same answer when the computation is repeated.

All of these issues are covered in multiple articles in the book.