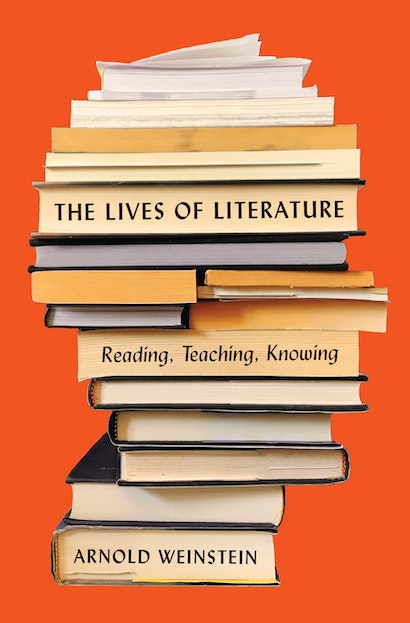 The Lives of Literature
Available in 2 editions
Buy This

The Lives of Literature: Reading, Teaching, Knowing, as the subtitle suggests, is after large game: why we go to literature, what its value might be in a world increasingly devoted to “information,” and what a career in teaching has taught me, as well as my students.

I expected the book to be an easy project, a final harvest of sorts.

But I was surprised. The elemental questions are the hardest ones to answer.

We read literature, I’ve come to believe, to live other. I do not mean that we change our beliefs or jobs or spouses after reading a novel. But the very experience of reading fiction—or, for that matter, poetry or plays—is inevitably an invitation to slough off your skin and become, for a while, someone else. This is not a romantic claim. Ask yourself: what is actually going on in your mind and heart as you read/negotiate a novel or poem, especially if it is a novel or poem that “speaks to you.” There is traffic here: two-way traffic since the book is entering you as much as you are entering it, jostling your own psychic whereabouts even if you remain comfortably seated in an armchair.

Literature has no factual status. The doings (or failures to do) of Hamlet or Jane Eyre or the “Invisible Man” exist in no history books, and have no evidentiary weight. Instead, they are a portal, an entry into times and places and struggles not your own, into subjectivities not your own. You try out—vicariously, briefly, “exitably”—fates and stories that exist only on the pages you’re reading. This is culture’s greatest hidden bargain, for we cannot easily enter into the minds of real-life people, even those we live with, much less those across the street or the globe, for we live, no matter how much empathy and curiosity we may have, anchored in our own bodies, and confined by our own minds.

I wrote “exitably”—it is a peculiar word, perhaps a coinage of my own—because even the darkest literary texts, the death-fed ones drenched in blood and worse can be put down, put back on the shelf, and voilà: you are free to go your merry way. That is a freedom quite unavailable to the players themselves: the blind Oedipus, the dead Hamlet, the mad Lear, the doomed figures in so many of our greatest books. The question that intrigues me is: what do you take with you when you exit a doom-filled book. As a literature professor who’s been at it for many decades, it’s a question I think about, in a comparative fashion. After all, in most of the courses taught at my university, the student finishes the books and the course with an informational payload, whether it be in physics, biology, economics or history. Ideally, the student exits with a kind of knowledge that is actionable. How might literature fare? I have to believe that the students who take my courses are entertaining some form of that very question. Why else would you take such courses. And it won’t do to answer: these are the classics, and you’ve got to read them.

I do not think one finishes a work of literature as somehow a better person, primed to do more good deeds or to vote properly. Rather, I believe the very experience of reading about lives and fates not one’s own stretches and deepens the human imagination. This matters. No reader today is likely to share a raft on the Mississippi with an escaped black slave, but that is what (unschooled, serenely racist) Huckleberry Finn does (in the 1840s, before the Civil War), and over the course of Twain’s novel, he (Huck) comes to a momentous discovery: Jim is human. Nothing in his culture had taught him that. It is all too easy to think that we (the educated) already know such things, and that what I’m proposing is a very low bar for education. But, in fact, it is a high bar, perhaps the very highest bar, and far too many people here and elsewhere routinely fail to reach it. Othering others—people of color, folks who identify as gay or trans, refugees on the run or caught at the border—is among the oldest ideological moves in history, as our knowledge of pogroms, death camps, tribal strife, indeed all wars, bears out.

Reading literature is a workout, for it moves us off-center and obliges us to inhabit—for a while—someone’s mindset who’s not us. I’d suggest that such literary texts may teach us more about ethics and morality than actual religious texts do. But they do so by becoming part of our own imaginative and sentient equipment, rather than by issuing a list of do’s and don’ts. We have the rare experience of walking in another’s shoes. It can be eye-opening, even heart-opening.

My book is not quite as earnest as I’ve made it sound. I had thought, when planning this book, that it would be, as I mentioned, a kind of “final harvest.” And there is a great deal of retrospect in these pages, as I seek to weigh and evaluate what I’ve done over so many decades. But looking back can kick you in the teeth: not merely do you not see the tree you’re walking into, but you actually do see some of the messes you’ve made, and why you made them. So there is a segment of this volume entitled “Gaffes” where I try to size up the damage: the wide array of blind spots, nasty surprises, stupid assumptions and painful truths that loom large in any career. I’ve wanted to offer an in-the-round picture of a lifetime teaching books to the young, with as little white-washing as possible. Oddly enough, this was fun to write.

And I hope my book is fun to read. The most overworked term in the university is “work.” Reading literature is not work. Gaining a vicarious sense of others’ lives is not work. Reading literature gifts us in ways we need to recognize. Most of us feel overwhelmed when we walk into a bookstore and see all those many books we’ve never read. So many books, so little time, we tell ourselves. But the truth goes the other way: reading literature does not take time; it gives time. It opens our own bounded lives up and out, bringing us to other places, other times, making them, for a while, ours.

Arnold Weinstein is the Edna and Richard Salomon Distinguished Professor of Comparative Literature at Brown University. His recent books include Morning, Noon, and Night: Finding the Meaning of Life’s Stages through Books and Northern Arts: The Breakthrough of Scandinavian Literature and Art, from Ibsen to Bergman (Princeton). He has also recorded five series of lectures on literature for The Teaching Company. He lives in Providence, Rhode Island.