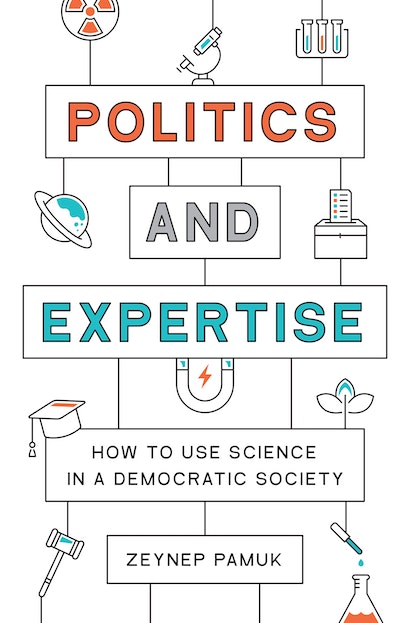 Politics and Expertise
Available in 2 editions
Buy This

Our ability to act on some of the most pressing issues of our time, from pandemics and climate change to artificial intelligence and nuclear weapons, depends on knowledge provided by scientists and other experts. Meanwhile, contemporary political life is increasingly characterized by problematic responses to expertise, with denials of science on the one hand and complaints about the ignorance of the citizenry on the other.

Politics and Expertise offers a new model for the relationship between science and democracy, rooted in the ways in which scientific knowledge and the political context of its use are imperfect. Zeynep Pamuk starts from the fact that science is uncertain, incomplete, and contested, and shows how scientists’ judgments about what is significant and useful shape the agenda and framing of political decisions.

ZP: I was initially interested in climate change and wanted to contribute to thinking about how we could address it better. I soon realized that there was already excellent work in moral and political philosophy on individual and collective responsibilities in fighting climate change, the just distribution of mitigation burdens, what we owe to future generations and so on. Yet there was little political uptake of these arguments. The intersection of science and politics on the climate issue was often pathological. I wanted to understand why this relationship was such a difficult one and how we might improve it.

What do you take to be the source of the tension between science and democracy?

ZP: Expert knowledge presents a rival source of authority in politics—one based on truth rather than the agreement of citizens. This is an inherent and probably ineliminable source of tension between science and democracy. There is an additional problem, which is that we cannot equate currently available scientific research with the truth, and certainly not with the whole truth. Scientific findings are always uncertain and incomplete, and sometimes biased or simply wrong. Even where findings are accurate, they give us only one part of the truth.

Despite its uncertainty and incompleteness, the available scientific research frames and constrains political debate. It shapes our understanding of the problems we face and the actions that are feasible to take in response. Politicians and the public can deny the science, but they cannot produce a different body of knowledge that speaks better to their needs and values. They must work with what scientists have to offer. A possible mismatch between the values and concerns that drive scientific inquiry and those of the public is thus another source of tension in the relationship.

You argue that science should be more open to democratic scrutiny and that we should have institutions that facilitate the scrutiny of scientific uncertainty and disagreement publicly. Would these not further erode trust in science?

ZP: There is a widely held view that experts enjoy greater trust if they take a consensus position and that public displays of expert disagreement create distrust. I want to push back against this. Scientists are often not in consensus, and an artificial consensus position designed to bolster scientific authority can do a lot of damage if it turns out to be wrong. And this happens all the time, as we saw with the reversal of advice on masking and school closures during the COVID-19 pandemic. Disclosing expert uncertainty and disagreement, by contrast, facilitates democratic scrutiny, clarifies the limits of advice, allows the pursuit of a broader range of policy strategies, and makes it easier to reverse course. It can also build trust by assuring the public that different possibilities have been carefully examined and objections have not been dismissed.

How does the book illuminate our thinking about the use of science during the COVID-19 pandemic?

ZP: The book’s main argument—that scientists’ values shape how they study an issue and this in turn influences the political uptake of a scientific issue—was on clear display during the pandemic. The scientific models that informed governments decision making were based on undisclosed value judgments and contentious conceptions of health and protection. These were reflected in the shortcomings of policies, from masking requirements to lockdowns. The book argues that public scrutiny of science, and especially of disagreement between scientists, could be a response to this problem. There were some productive instances of such public disagreement, but also a surprising degree of conformity as experts around the world converged on similar recommendations, despite the uncertainty of the science. Finally, the debate about the origins of the virus raised important questions about the kinds of scientific research that ought to be funded and whether some science is simply too risky to pursue. These are concerns that the book directly anticipates by asking whether democracies should stop funding “dangerous” science and who should make this decision.

You argue that we need to dedicate more attention to funding decisions for science. Why is that important from a democratic perspective?

ZP: Funding decisions for science play a crucial role in determining the direction, speed, and limits of social and political change. What politicians and the public consider to be desirable, feasible, or possible is shaped by the expert knowledge available to them. The absence of the right kind of knowledge makes it difficult to criticize policies and realize alternative visions of society. Funding decisions are thus the locus of an important political power. In the second half of the twentieth century, most scientific research was publicly funded. This was justified on the grounds that scientific research would lead to discoveries that would further the public interest. However, the opportunity to set up a regime of scientific research that would be directly responsive to the needs of citizens was passed over in favor of one that gave a high degree of autonomy to scientists. At a time when public funding for science is eroding, it is crucial to articulate its value and rethink what a properly democratic approach to funding science looks like.

Zeynep Pamuk is assistant professor of political science at the University of California, San Diego.