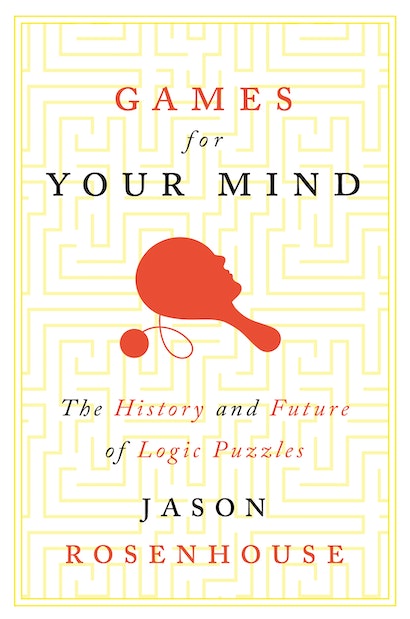 Games for Your Mind
Available in 3 editions
Buy This

Many people have tried to define logic. James Thurber wrote, “Since it is possible to touch a clock without stopping it, it follows that one can start a clock without touching it.” Abmrose Bierce defined logic as “the art of thinking and reasoning in strict accordance with the limitations and incapacities of the human misunderstanding And Bertrand Russell said, “Logic is the subject in which nobody knows what one is talking about, nor whether what one is saying is true.”

Aristotle inaugurated the study of formal logic in a series of six works today known collectively as The Organon, meaning “the tool.” His intention was to provide a comprehensive survey of the entirety of proper reasoning, and part of that project was a classification of correct argument forms. His ideas were presented in the Prior Analytics, which opens like this:

It would seem Aristotle also inaugurated the tradition that logic textbooks should be turgid and dull.

In the medieval period, scholars such as Peter Abelard and William of Ockham produced towering, seminal works of staggering genius, written very much within the Aristotelian tradition. Today these works can be found collecting dust in some of the darkest corners of the world’s university libraries. Seriously, nothing to curl up with before bed in that charming little collection of verbiage.

The excesses of medieval logic provoked something of a backlash in the Renaissance. In a famous textbook nowadays referred to as the Port-Royal Logic, published in 1662 by Antoine Arnauld and Pierre Nicole, we find this:

If we may believe [the philosophers], they will furnish us … with a light capable of dispelling all the darkness of the mind; they correct all the errors of our thoughts; and they give us rules so sure that they conduct us infallibly to the truth … These are the praises which they have themselves bestowed on their precepts. But if we consider what experience shows us of the use which these philosophers make of them … we shall have good grounds to suspect the truth of their promises.

Bertrand Russell was even more scathing. Commenting on The Organon as a whole, he wrote:

I conclude that the Aristotelian doctrines with which we have been concerned in this chapter are wholly false, with the exception of the formal theory of the syllogism, which is unimportant. Any person in the present day who wishes to learn logic will be wasting his time if he reads Aristotle or any of his disciples.

On the other hand, Russell said of Euclid’s Elements that “the value of his work as a masterpiece of logic has been very grossly exaggerated,” so he could be a pretty tough critic. I’m just saying.

Of course, Russell was in the vanguard of the transition to mathematical logic that occurred in the late nineteenth and early twentieth century. His masterwork was Principia Mathematica, coauthored with Alfred North Whitehead. Among the book’s many accomplishments was to prove, and I mean for certain, that 1+1=2. This proof appears after many hundreds of pages of build-up. I guess I should have included a spoiler alert.

With this background, perhaps it is unsurprising that recreational logic has a considerably shorter history than logic itself. Where Aristotle saw a description of the totality of human reasoning, Lewis Carroll saw a game suitable for children. He made his case in The Game of Logic, published in 1886. In the twentieth century, Raymond Smullyan presented deep truths of mathematical logic in the form of entertaining puzzles involving knights, who only make true statements, and knaves, who only make false statements.

This is the history of logic puzzles. The future is in the turn toward so-called non-classical logics that features prominently in modern philosophical discourse. It is nowadays commonplace for logicians to countenance truth values other than “True” and “False,” to debate whether the law of noncontradiction is overrated, and even if there is such a thing as a true contradiction. (No idea is too daft that some philosopher has not floated it.) The practical utility of these ideas is hotly debated, but there is no question that they provide ample fodder for modern-day puzzlers.

These are the ideas I explore in my book Games for Your Mind: The History and Future of Logic Puzzles. If I have been successful, then the book answers the title question of this essay in the affirmative. But I cannot prove logically that I have accomplished this.