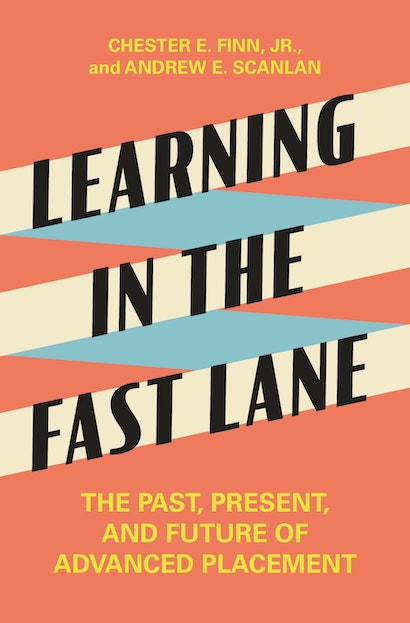 Learning in the Fast Lane
Available in 3 editions
Buy This

The Advanced Placement program stands as the foremost source of college-level academics for millions of high school students in the United States and beyond. More than 22,000 schools now participate in it, across nearly forty subjects, from Latin and art to calculus and computer science. Yet remarkably little has been known about how this nongovernmental program became one of the greatest success stories in K–12 education—until now. In Learning in the Fast Lane, Chester Finn and Andrew Scanlan, two of the country’s most respected education analysts, offer a groundbreaking account of one of the most important educational initiatives of our time.

CF: I skipped my freshman year of college with the help of high-school Advanced Placement (and my granddaughter will take her first AP exams in 2020), so I’ve long had a personal interest in this program and what it can do for a young person. More broadly, my research and writing interests—and those of the Thomas B. Fordham Institute where I mainly work—have for several years included “gifted education” in its various forms, as well as the “excellence gaps” that result when some kids have access to such education while other, equally able, youngsters don’t. (One example: an earlier PUP book titled Exam Schools: Inside America’s Most Selective Public High Schools.)

AS: I didn’t grow up in the American school system; I’m from Ireland. As such, my research interests were piqued by the desire to learn more about the closest thing the U.S. has to a nationally benchmarked curriculum and testing system, comparable to what is seen in other countries (and to what I myself experienced). Moreover, I’ve always been acutely interested in how quality, large-scale, externally validated systems like AP can lift up traditionally underserved children and begin to close gaps, not just in access, but also in outcomes. The U.S. shares many of these challenges with other countries. Lastly, I jumped at the opportunity to work so closely with Checker, whose expertise on all things in U.S. education (and writing prowess) made the experience of researching and co-authoring this book an invaluable education in itself.

What might surprise readers about the history of the Advanced Placement program?

Those who picture Advanced Placement as the property of privileged kids attending elite public and private schools were once mostly correct, but over the past several decades AP has taken on a major second role: opportunity enhancer for able disadvantaged and minority youngsters. Along the way it’s also grown enormously, with close to three million kids taking some five million exams in 38 different subjects during the first two weeks of May.

In your analysis, what has made Advanced Placement such a success?

AP is the “gold standard” for rigorous high school education across myriad subjects, and doing well at it brings real payoff for the young people who participate: great content, heavy-duty study skills, experience with college-level work, better odds of getting into selective universities, and an excellent chance of earning some degree credit upon arrival there—or at least skipping entry-level college classes and going straight to the more advanced kind.

What makes Advanced Placement unique among other programs in the United States and elsewhere in the world?

AP is the closest thing America has to a quality national high school curriculum: the same in Portland, Oregon, as in Portland, Maine; in inner-city Chicago as in suburban Winnetka. Yet because it’s optional (for schools, students, and teachers alike), and because it’s privately operated rather than a government mandate, it has largely avoided the political pitfalls that otherwise beset anything resembling a national curriculum—as we saw so painfully, for example, with the Common Core standards. There have been some course-specific controversies, to be sure, and we deal with those in the book, but AP has largely responded, recovered, and been allowed to grow relatively unimpeded.

Could you describe some of the controversies surrounding Advanced Placement, and describe your perspective on them?

Our book devotes four chapters to challenges and controversies! We alluded to one (“culture wars”) above and will mention two more here.

Competition from other sources of college-level work during high school—notably the fast-growing dual credit/dual enrollment phenomenon—is probably AP’s greatest challenge today. These alternatives can certainly benefit some students, but dual credit is plagued by uneven quality, dubious rigor in many places, and uncertainty as to how far the college credits that it yields may transfer to the institution of one’s choice.

Although AP continues to grow rapidly, some elite prep schools are repudiating it, saying it constrains their curricular independence. It’s our view that, AP having become all but ubiquitous across American secondary education, those schools are mostly looking for other ways to make themselves distinctive (and justify their lofty tuitions). What’s more, even when they refuse to teach College Board-sanctioned AP classes, almost all of them still enable their students to take the AP exams—parents demand it!—and often boast about how those kids fare!

How can Advanced Placement help solve some of the issues plaguing the United States education system?

Sadly, AP is itself plagued by some of those issues, especially the miserable quality of elementary and middle school education experienced by far too many young Americans, especially those from poor and minority backgrounds. Advanced Placement has scant leverage over what happens before 9th grade, and while it’s possible for outstanding high schools to do a lot of remediating and get some kids ready to succeed in AP classes and exams, for those coming from crummy middle schools that’s a very heavy lift. An exceptionally well-run school system can create a pipeline from “gifted and talented” programs in the early grades into AP (and International Baccalaureate and dual credit) in high school, but there aren’t nearly enough such systems, and our book recounts some of the bureaucratic and implementation obstacles that are widespread. (It also shows how schools that control the whole sequence—often charter schools—can introduce “pre-AP” rigor well before 9th grade.)

What’s the one thing you’d like readers to take away from this book?

AP isn’t perfect, and it isn’t equally available to all who might benefit from it, but it’s the best thing going (at scale) in American secondary education, with the potential to transform entire schools and, even more important, the life prospects of millions of able young people from all kinds of backgrounds.

Chester E. Finn, Jr., is a distinguished senior fellow and president emeritus at the Thomas B. Fordham Institute and a senior fellow at Stanford University’s Hoover Institution. He is the author or coauthor of many books, including Exam Schools: Inside America’s Most Selective Public High Schools and Troublemaker: A Personal History of School Reform since Sputnik (both Princeton). Andrew E. Scanlan is a research and policy associate at the Thomas B. Fordham Institute.