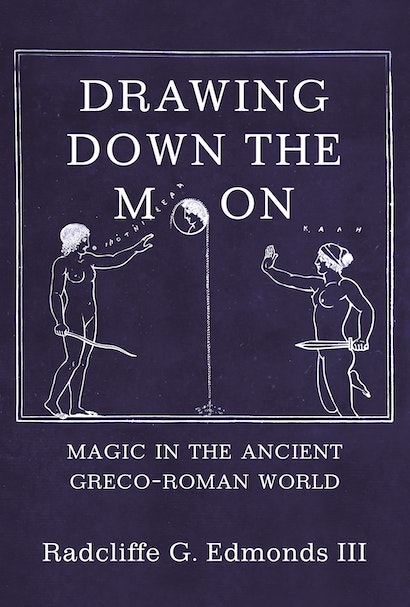 Drawing Down the Moon
Available in 3 editions
Buy This

What did magic mean to the people of ancient Greece and Rome? How did Greeks and Romans not only imagine what magic could do, but also use it to try to influence the world around them? In Drawing Down the Moon, Radcliffe Edmonds, one of the foremost experts on magic, religion, and the occult in the ancient world, provides the most comprehensive account of the varieties of phenomena labeled as magic in classical antiquity. Exploring why certain practices, images, and ideas were labeled as “magic” and set apart from “normal” kinds of practices, Edmonds gives insight into the shifting ideas of religion and the divine in the ancient past and in the later Western tradition.

RE: The impetus for this book grew out of the course I have been teaching at Bryn Mawr College since 2000 on Magic in the Ancient Greco-Roman World. Rob Tempio, an editor from PUP, saw my syllabus online and suggested that it might make a good book. I was struggling to find a book to use in my class that could provide a good background for my students, and none of the options already published really fit my needs, so I decided to make one for myself – and for other teachers and students who might want a comprehensive introduction to the subject. Like my class, the book moves systematically through a whole range of evidence that could be considered as magic in the ancient world, ranging from curses and erotic spells to the esoteric arts of alchemy and theurgy. As I go through each set of evidence, I am always considering the question of what counts as magic, what should be labeled ‘magic’.

The evidence for magic provides a marvelous window into aspects of life in the ancient Greco-Roman world that are often overlooked – or deliberately hidden away – in more canonical sources. Some of the materials, such as the curse tablets, give voice to people who would never make it into the official histories, the ordinary craftsmen or performers who turned to magic to give them an edge in their daily rivalries with their competitors. The hatred and malevolence revealed is often ugly and disturbing (especially in the erotic material), but it provides an important corrective to the burnished image of the glory that was Greece and the grandeur that was Rome that often still appears in contemporary discourse about the ancient world. Other materials, by contrast, such as astrology, alchemy, and theurgy, provide insights into the theological concerns of sophisticated thinkers trying to make sense of the world from a polytheistic perspective. Much of the evidence for these practices was deliberately suppressed as the Greco-Roman world became increasingly Christian and new theological concerns came to predominate, but the analysis of these complex ideas again provides another side to our understanding of the ancient world. By studying magic as a non-normative form of religion, we can gain a better sense of what was taken as normative, what kinds of interactions with the divine powers of the cosmos were seen as normal and acceptable at what times and places and by whom.

I hope that this book can be used by teachers who are introducing their students to the cultures of the ancient Greco-Roman world, either as a background book for a course on magic or as a resource for those wanting to fill in a portion of a course with an exploration of this fascinating aspect of these cultures. Although I discuss a number of the ancient sources in detail, I would still plan to teach from the book using various primary text sourcebooks (such as Betz’s translation of the Greek Magical Papyri and Gager’s collection of curse tablets), since I think students need to encounter the evidence directly. This book is also intended for scholars, however, since I do not only pull together a survey of the materials and distill previous scholarship but I also advance new arguments about the discourse of magic in the ancient world.

How did you decide what to include?

RE: The basic shape of the book was dictated by the materials of the course, but, even in a book that runs to nearly 500 pages, I had to radically limit the things I might possibly have included. I keep my focus on materials in Greek and Latin, despite the fact that the world of the ancient Mediterranean included a vibrant mix of cultures far beyond those two.  I had to leave out, for example, Egyptian, Phoenician, Hebrew, Persian, and Mesopotamian materials, all of which could provide further insights into the Greek and Roman evidence. I also left aside the magical evidence that comes from theological contexts underpinned by Christianity, even though some of that material is in Greek or Latin as well as Coptic and other languages. All these limitations are to some extent arbitrary for the sake of keeping the study to a (somewhat) manageable scope, but I hope that I could at least convey the idea that the discourse of Greek and Roman magic did not take place in a hermetically sealed environment, separate from these other cultural traditions.

Even within these limits, the question of what to include is never simple and straightforward.  How to define magic is one of the central themes of the book, and each chapter grapples with the issue of what things were or should be labeled as magic.  Many forms of divination, for example, were not considered magical but perfectly normal and indeed required in many contexts.  Even some forms of malevolent curses could be performed in authoritative civic ceremonies, a normative part of the religion of the community.  However, all of these things might also, in certain circumstances, be considered magic, so the issue is to determine when and where and why and by whom the label of magic might be applied.  My study therefore examines most of the things that could be – or at least sometimes were – considered magic.

Can you explain the significance of the title?

RE: I was of course aware of Margot Adler’s famous book on neo-paganism in America from 1979, but the magical trick of drawing down the moon appears so frequently in the ancient evidence as the archetypical marker of magic that it provides a perfect test case for determining the parameters of the category of magic in Greco-Roman antiquity.  It is characteristic, for example, that the first witness that survives from antiquity of this trick is a joke in the comic poet Aristophanes.  This passage presents drawing down the moon as something that everyone knows that Thessalian witches do, a commonplace of the marvelous. However, the marvelous power of this Thessalian moon-trick is double-edged in a way that is typical of much of the evidence for magic in the ancient Greco-Roman world.  It is presented as an incredible power that can miraculously solve an otherwise intractable problem, but at the same time it appears as the bogus scheme of an idiot, something that would never work and that only a fool would believe in.  This ambivalence is a common feature in the evidence for magic; either it is extra-ordinarily powerful or extra-ordinarily useless, amazing miracle or stupid superstition. The moon-trick also appears in a huge range of sources from Classical Greece to late antique Rome and is used for a surprisingly large number of different purposes, from erotic magic to bringing rain to changing silver into gold.  Most importantly, it regularly appears in the list of things that magicians can do, so it helps to define the boundaries of what ancient thinkers categorized as magic.

What is the significance of the image used on the cover?

RE: That image from an ancient Greek vase is the only image from antiquity that can be identified as drawing down the moon. The vase itself no longer exists, since the boat carrying the spoils from some early eighteenth-century ‘excavations’ (i.e., tomb robberies) in Italy by Sir William Hamilton back to England went down off the coast of Italy. This image is actually a line drawing of the vase painting from Hamilton and Fischbein 1791 (#44), the collection of drawings made of the vases before they were to be shipped off to England. Most of the reproductions of this image, however, are copied not from the original publication, but from the version of the sketch from Röscher’s 19th century encyclopedia of Greek Mythology. Adler’s Drawing Down the Moon has such a version of it on the inside leaf, and this copy is also included in recent sourcebooks for ancient Greek magic. When I was looking for an image drawing down the moon, I discovered that Bryn Mawr College has a copy of the original Hamilton and Tischbein publication in its special collections, and so I also realized that the image in Röscher must be a (somewhat loose) redrawing from the original publication, since the positions of the figures are reversed and there are some other differences in detail. My cover image, then, stands to the reproduction in Adler’s book rather like my analysis of the moon-trick is to her reworking, a more scholarly study that goes back to the original evidence rather than relying on 19th century receptions.

What is new about your approach to the problem of defining magic?

RE: Several recent works have entirely given up on the attempt to provide a definition, while others rely on rather vague criteria, but the absence of a strong definition leads to circular arguments and unexamined assumptions. Building on the methods I used in my recent study, Redefining Ancient Orphism, I use a polythetic definition, in which several different criteria (efficacy, performance, ends, and socio-political location) serve to define the discourse of magic, with varying levels of cue validity in different times and places. Such a definition is flexible enough to distinguish in a wide variety of circumstances the phenomena that are labeled as magic from others that are not, but it also provides clear enough criteria to allow for the analysis of specific examples and the pinpointing of the particular features that make for the categorization as magic. Although a modern, scholarly approach can never perfectly recapture the emic (insider) perspective, the set of criteria I have chosen rely on the patterns of ancient classifications rather than the more often used criteria that derive from Frazer’s 19th century developmental schema of anthropology.

One of the effects of my approach is to contextualize the ritual practices labeled as magic within the larger ritual practice of ancient Greek and Roman polytheistic religion. The prayers and sacrifices of normal religious ritual differ from magic less in what is done than how or when and where it is done (performance) or by whom it is done (socio-political location), so my approach helps to bring out the contrasts more clearly.  My chapter on prayer and sacrifice thus uses the exploration of magic to provide insights into the normative workings of relationships with the divine in Greco-Roman religion.

My study also includes material that has never before been brought together into a comprehensive study of ancient magic, particularly the chapters on astrology, alchemy, and theurgy.  Alchemy, in particular, has generally been approached from the perspective of the history of science, but the fact that the same scribes who were compiling the recipe books of spells known as the Greek Magical Papyri were also including collections of alchemical recipes shows that the separation between science and magic is a modern, not an ancient one.