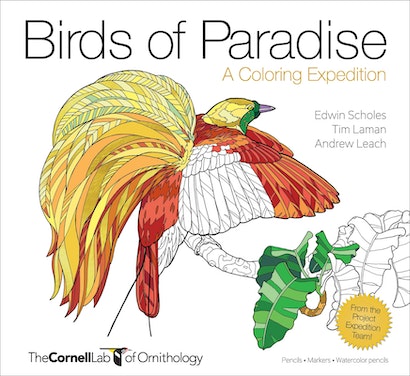 Birds of Paradise
Available in Paperback
Buy This

Therapeutic coloring is loaded with health benefits for its practitioners, including sharper focus, stress relief, and even improved sleep. From the authors of National Geographic’s Birds of Paradise, Tim Laman and Edwin Scholes, and Cornell Lab illustrator, Andrew Leach, Birds of Paradise: A Cornell Lab Coloring Expedition, brings the stunning and amazing world of Birds of Paradise to birders and coloring enthusiasts everywhere. At a time of uncertainty and high anxiety, we hope these free downloadable coloring pages are as good for your inner birder as they are for your brain.

The male King Bird-of-Paradise is one of the smallest birds-of-paradise, but what he lacks in size he makes up for in color. His crimson head and brilliant white undersides contrast sharply with the emerald green feathers of his breast and the tips of his tail.

With two antenna-like plumes sprouting from his head, the male King of Saxony Bird-of-Paradise is a feathered wonder. His rhythmic bouncing display is an extraordinary sight, and his calls, which sound something like radio static, are an iconic sound of New Guinea’s montane forests.

Performing the “flower pose,” the male Raggiana Birdof-Paradise turns away from the female with his head downward so that the plumes from his flanks fall like flower petals over his back. A female watching from behind is engulfed in a mass of rich color and texture.

With the yellow plumes from his flanks cascading over his back in an explosion of color, the male Greater Bird-of-Paradise shows why his feathers have been treasured by plume hunters for centuries. One of the largest members of the family, this species is also one of the most iconic.

As daylight breaks, sunlight reaches the leafy canopy of a towering forest tree. A male Red Bird-of-Paradise turns his body, wings open, to face downward from a bare branch. His flank plumes catch the light and his body is framed by the heart-shaped ribbons cascading from his tail.

His blunt-tipped wing feathers unfurled, the male Victoria’s Riflebird reveals how female mating preferences have altered wing shape to form an ornament at the expense of aerodynamics. While displaying, he raises his rounded wings over his head, facing the female on his tree-stump display pole.