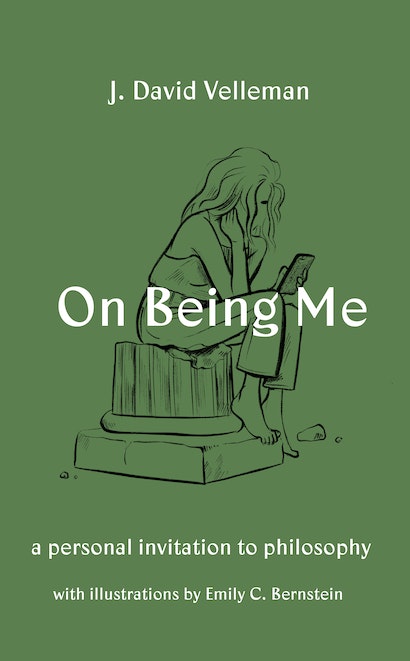 On Being Me
Available in 2 editions
Buy This

We’ve all had to puzzle over such profound matters as birth, death, regret, free will, agency, and love. How might philosophy help us think through these vital concerns? In On Being Me, renowned moral philosopher J. David Velleman presents a concise, accessible, and intimate exploration into subjects that we care deeply about, offering compelling insights into what it means to be human.

Why do you call your book “a personal invitation to philosophy”?

JDV: I wrote the book for readers who haven’t even considered learning about philosophy. I’d like to think philosophy students will find it interesting, too, but it is addressed, in the first instance, to a reader who isn’t one of them—yet.

There are many excellent books of philosophy written for the general reader, but they typically give introductory lessons in the subject, on the assumption that the reader has already decided to learn about it. Those books read like lectures in Philosophy 101—clear, interesting, even entertaining lectures, but not such as you would sit through if you weren’t already motivated to enroll in the course.

I wanted to write a book for readers who think they aren’t interested in philosophy, if they think about it at all. And I wanted to show them that they are interested, because philosophy begins with concerns that they already have, simply in virtue of being persons. In each section of the book, I begin with one of those ordinary concerns and then “think aloud” about it, philosophically. The reader is invited to do philosophy with me rather than hear it from me.

What sort of concerns?

I prize my ability to make up my own mind. Latte or cappuccino? Caf or decaf? Whole milk or skim? The choice is mine every time I get to the front of the line.

But do I really have a choice? I haven’t yet decided what I’ll order tomorrow morning—I don’t know how groggy I’ll feel, or what the bathroom scale will have revealed—but there is already a fact of the matter today, a fact that would show up in a crystal ball, if I had one. If I end up ordering a decaf skim latte tomorrow, it will already have been true today that I would, even though I haven’t yet made the decision. And if it will already have been true that I would order a decaf skim latte, then how can I still have a choice when I get to the front of the line? Will I merely be finding out what I was going to order all along?

That would be disturbing, to say the least. This is my life, and what makes it mine is not just that I am undergoing it; it’s mine because I am making it up as I go along.

Am I making it up, though? That’s a philosophical question. And the question is not  merely academic; it’s a question that goes to the heart of my place in the overall scheme of things. Am I the author of my life, or am I just an observer? Part V of Being Me offers a reassuring answer to this question.

Why did you write about yourself? Who cares about being you — who other than you, that is?

JDV: On Being Me isn’t about being me, David Velleman. It’s about being a self-aware creature, the kind of creature that has the concept “me”. I can make choices about my life only because I can think about it as “my life”, the life of the creature hereby thinking about it. My cat doesn’t have the concepts “me” or “my life”; she doesn’t even have the concept “my tail”, or she wouldn’t resume chasing that tail after it slips from her paws. (She’s not trying to strike a circular yoga pose.)

I suppose I could have titled the book “On Being a Creature That Can Think of Itself as ‘Me’”, but that would have been awkward, not to mention unmarketable.

Of course, an academic philosophy book would discuss self-aware creatures so described, in the third person. (I’ve written such books.) I wrote this book in the first person not only because the result is more readable but also because I hope that the reader will try on my first-personal thoughts verbatim, thereby applying them to him- or herself.

Even though it’s not about being you, the book includes a fair amount of autobiography, since you take yourself as a case-in-point. Have you been changed by doing philosophy? What impact has it had on your life?

For example, I am a very future-oriented person. I am always looking ahead to what comes next, rarely looking back to the past. So I’m very impatient, but I don’t go in for emotions like regret and resentment.

I’ve never understood why people spend emotional energy regretting what might have been. I’ve sometimes felt inadequate for being unable to empathize with them. But in Part IV of the book, I come to the conclusion that regretting what might have been makes no sense. Once I’ve figured out what it is to be me, I realize that the guy who would have been rich today if I had invested in Apple Computer back in 1984—that guy would have been David Velleman but he would not have been me. I can envy him, but I can’t reasonably regret not being him, any more than I can regret that I’m not Warren Buffett. I could have invested in Apple Computer back then, but I couldn’t have been the person reaping the profits today.

So philosophy reconciles me to lacking that kind of regret. By the same token, though, it prods me to rein in my impatience. Understanding what it is to be me leads to the conclusion, in Part III of the book, that wanting to hurry up and get to the future is senseless, because I am not headed to the future at all: I’m not a thing that moves through time. I am extended in time, like a plant that extends from its roots to its leaves. When, as a child, I was so impatient to become an adult, I was confused. The roots of a plant don’t become the stem or the leaves, and so they should be content with being roots. I should have been content with being a child, leaving adulthood to be enjoyed by a future extension of me.

So philosophy has changed my attitude toward time. I no longer feel inadequate for missing the point of regretting what might have been, because there is no point. And when I feel impatient, I can remind myself that I’m not going anywhere—in time, that is. I should focus on where I am, in the present moment.

Why did you include illustrations in the book?

JDV: Being a self-aware creature comes naturally; talking about self-awareness is another thing entirely. It gets complicated quickly. Pictures make it easier to grasp.

I had the good fortune of finding an artist, Emily Bernstein, who was willing to collaborate with me rather than simply draw to my specifications. I wouldn’t have known what to specify, and I needed an artist to help. Emily was wonderfully inventive in figuring out how to illustrate the philosophy. Among her inventions was the idea of drawing herself in the position of “me”, thus making clear that the book isn’t about me in particular. I hope the reader will imagine him- or herself in place of the character in her drawings, while also enjoying Emily’s artistry, as I do.

What would you like the reader to take away from the book?

JDV: What I love most about doing philosophy, and hope the reader will share, is the realization that being a person is every bit as wonderful as it seems.