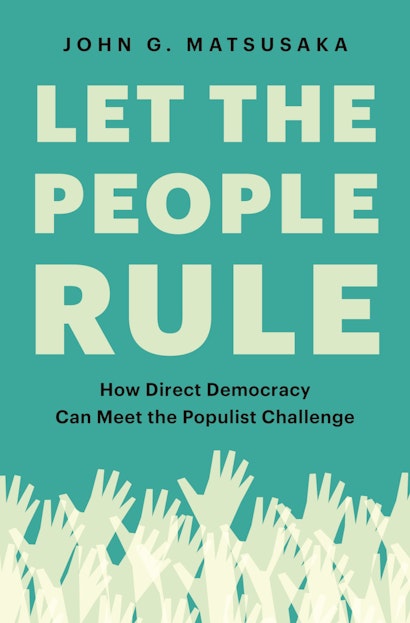 Let the People Rule
Available in 3 editions
Buy This

The coronavirus pandemic has exposed underlying tensions concerning the role of experts in policy decisions. To build confidence in democracy, experts should function as advisors not deciders, with important decisions tied more closely to the people.

The COVID pandemic has spotlighted one of the most polarizing features of American democracy: the growing importance of experts in making policy decisions. Government decisions to lock down households and businesses, close schools and beaches, and require citizens to wear masks have been driven by expert advice. Experts have become lightning rods for controversy and public opinion on expert advice has polarized along partisan lines during the pandemic, with Democrats defending lockdowns, closures, and masks, and Republicans skeptical.1

This quarrel over the role of experts is the latest manifestation of a tension at the heart of American democracy that has been building for decades. Let the People Rule explores its origin and shows how it is contributing to the growth of populist sentiment. In a nutshell, over the last century, American government transformed from a modest enterprise in which policy decisions were made by elected officials, to a massive “administrative state” in which most laws are made by unelected experts (technocrats) in the agencies (such as the Treasury Department, the Federal Reserve, and the EPA) and the courts. This growth of government-by-experts was an efficient adaptation to an increasingly complex world, and every other advanced democracy went down the same path.

But turning over lawmaking to unelected experts had an unanticipated side effect: it loosened the connection between ordinary citizens and those who make the rules. Surveys show a massive collapse since the 1960s in the fraction of people who say that government cares about them. More and more people believe they have no say in government, and that government serves the interests of a shadowy elite (comprised, depending on the speaker’s political orientation, of corporations, “the 1%”, media and academics, and/or the “deep state” of technocrats). The country’s reliance on policy experts has unintentionally contributed to distrust in government and watered the soil for populist sentiment.

COVID offers a troubling case study. The arrival of the coronavirus posed a dangerous global problem requiring swift action in an environment with significant uncertainty. With the immediate threat to public health, health and disease experts took leading roles in formulating policy responses around the globe. In some cases, the policies themselves were formulated and promulgated by unelected officials in health departments. In California, for the example, the legislature has given county and city health officers almost unlimited power to impose lockdowns, and these officers issued detailed directives regulating businesses, schools, and citizens. In other cases, the directives came from elected officials, but they invariably relied on the advice of health experts.

It was not long, however, before the regulations came under fire. Protesters complained that health officials were focusing myopically on reducing risk of transmission, and not taking into account the economic damage they caused.2 As the lockdowns dragged on, other voices complained that the costs to children from closed schools were being ignored and that mental health consequences were being slighted.3 Observers noted that the lockdown policies were particularly harmful to blue collar workers and the poor, who had to deliver Amazon packages and staff grocery stores for the wealthy white collar shoppers—like those issuing the orders—who safely did their business from home with Zoom meetings. In Rio Grande County, Colorado, the public health director was fired by the country commissioners after she refused to relax restrictions, and in Orange County, California, the chief health officer resigned after intense criticism of a mask mandate by citizens and county commissioners.4

Stories of this flavor have become common in recent years. Coal miners, workers in extractive industries, and farmers complain about EPA regulations issued by unelected environmental experts that protect the environment but cost them their livelihoods. During the 2007–2008 financial crisis, the Occupy Wall Street and Tea Party movements protested that Wall Street bankers got bailed out while ordinary Americans on Main Street lost their homes.5 More and more Americans tell pollsters that government looks after elites who have access to the decision makers, leaving ordinary people on the outside looking in.

How do we unwind some of this tension, and make Americans feel that government is on their side? Part of the answer is to utilize experts in a more democratic way.

A useful starting point is recognizing that most expertise is of a narrow nature, while policy decisions involve a wide array of issues. Health experts can tell us how much the spread of the coronavirus might be slowed by closing schools, but not whether that is worth the cost of children of losing out on education. One recent estimate put the cost of four months without schooling as $2.5 trillion in lost future earnings for children.6 The policy question of whether to close schools is not a technical question for disease experts alone, but a “political” or “values” question about how our society balances the welfare of high-risk persons such as the elderly against the welfare of children. These policy decisions require political experts, people skilled in balancing the needs of different groups of society.

We should also keep in mind that experts’ advice might be colored by their personal history, personal circumstances, and possibly partisan preferences. Like all human beings, experts are going to see the world through the lens of their own identities and experiences, which may influence what they see as most important. Since most belong to a narrow socioeconomic elite—more wealthy, more educated, more likely to do “knowledge work”—they may have blind spots about the issues that matter to “ordinary” Americans. And it almost seems inevitable that the expert-driven coronavirus lockdown policies have come under fire for being minimally disruptive to white collar workers like the experts themselves, while imposing severe costs on working class Americans.

Compounding the problem is the fact that experts themselves often disagree. For COVID, some experts in the U.S. have advised wearing masks, while those in the Nordic countries have been dubious.7 The Center for Disease Control advises keeping a physical distance of 6 feet; the World Health Organization advises 3 feet. Disagreement between experts is to be expected in a crisis because the science is uncertain and rapidly evolving as new data are analyzed in real time.

All of this suggests that we should steer away from delegating broad policy decisions to technical experts. Policy decisions should be based on as much expert advice as we can get, but the final decisions—encompassing the inevitable tradeoffs between competing values and groups—should be made through political processes, in most cases by our elected representatives, but occasionally by the people themselves through referendum. When decisions fall to our elected leaders, they must take ownership and not use experts to obscure the fundamental tradeoffs at stake in a policy decision.

Treating experts as advisors and not decision makers will take them out of the line of fire. Expert advice will be depoliticized, and experts will not have to swim in the whirlpool of partisan contentiousness. Removing experts from the task of balancing different social interests—which is the essence of politics—extricates them from a task for which their skills are poorly suited, and lets them focus on what they do best.

Finally, we can consider consulting the people directly by referendum on some issues. When it comes to fundamental value tradeoffs, such as whether to open schools and put the elderly at risk vs. close schools and put the future of children at risk, perhaps the community at large ought to have the opportunity to weigh in. One can imagine holding advisory referendums to solicit public opinion on an array of current issues, such as whether to reopen schools, how to reform policing, and so forth. Opinion surveys tell us that large majorities of Americans would like to be able to vote on important national issues, and most countries do this periodically. Giving the people more of a voice in how they are governed would be a step toward better democracy, and cool the flames of populism.