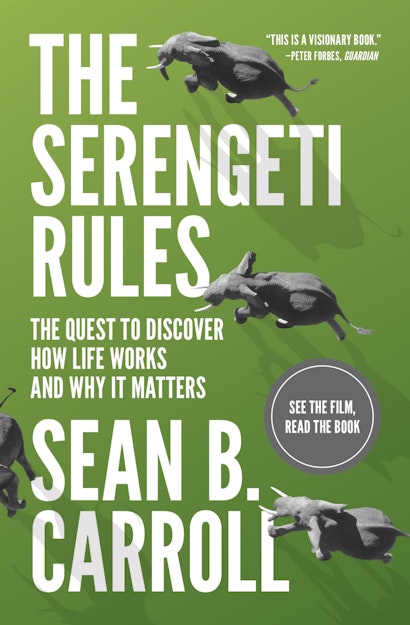 The Serengeti Rules
Available in 2 editions
Buy This

“The Serengeti Rules” won the Emmy Award for Outstanding Nature Documentary during the 41st annual News and Documentary Awards ceremony on September 22 and was nominated as a finalist for best cinematography. In the fields of biological and environmental studies, Sean B. Carroll has made a name for himself not only as a scientist, writer, and educator, but as a storyteller. In his book, The Serengeti Rules: The Quest to Discover How Life Works and Why It Matters, Carroll argues that the most critical thing we have learned about human life at the molecular level is that everything is regulated. Carroll uses medical analogies, comparing the current blight on nature to a disease that ravages the body. The book will leave readers considering life on several scales, both personal and global. Recently he took the time to answer some questions about the book.

One of the central themes of your book is that “everything is regulated” in life. What does that mean?

SC: What it means is that at all scales of life the numbers of things are controlled. For example, in our bodies, the concentration of every kind of chemical—hormones, salts, enzymes and fats, and the numbers of every kind of cell—red cells, white cells and so on, are maintained within certain ranges by regulation. Similarly, in nature, the numbers and kinds of animal and plants in a given place are regulated.

Why is all of this regulation important?

SC: Regulation is very important because diseases (heart disease, cancer and so on) are generally abnormalities of regulation, when too little or too much of something is made. Likewise, in nature, when key species are lost or removed, too many or too few individuals of other species persist, and that habitat becomes unhealthy and may collapse. So learning the “rules of regulation” is very important to both medicine and conservation.

What have we learned about those rules?

SC: A century-long quest of biology has been to discover how life works, and that entails the deciphering of the “rules of regulation” in the body and in nature at large. The stories that make up the book are about those pioneers who tackled the mysteries of regulation and discovered important rules that have had huge impacts in medicine, ecology and conservation.

The scientists portrayed in The Serengeti Rules are admirable, sometimes heroic figures. Why did you choose to organize the book around their stories?

SC: I am a firm believer in the power of stories. Science is far more enjoyable, understandable, and memorable when we follow scientists all over the world and share in their struggles and triumphs.

You use an analogy from sports to explain how scientists have figured out how to treat many diseases. How does that analogy apply to medicine?

SC: In the body, the key “players” are molecules that regulate a process. To intervene in a disease, we need to know what players are injured or missing or what rules of regulation have been broken. The task for biologists is to identify the important players in a process, figure out the rules that regulate their action, and then design medicines that target the key players. In the book, I tell the stories of just how that was done to make such dramatic progress against heart disease and cancer.

Your book is called The Serengeti Rules. What are those rules?

SC: Just as there are rules that regulate the numbers of different kinds of molecules and cells in the body, there are ecological rules that regulate the numbers and kinds of animals and plants in a given place. I have called these the “Serengeti Rules” because that is one place where they have been worked out and they determine, for example, how many lions, or buffalo, or elephants live on an African savanna. But these rules apply all over the globe, in oceans, rivers, and lakes, as well as on land.

Do these rules apply then to conserving and restoring species?

SC: Absolutely. But in contrast to the considerable care and expense we gladly undertake in applying molecular rules to human medicine, we have done a very poor job in considering and applying these Serengeti Rules to human affairs. For centuries we have hunted, fished, farmed, forested, and settled wherever we could, with no or very little grasp of altering other species. For a long time, we did not know any better, but now we do. So minding these Serengeti Rules may have as much or more to do with our future welfare than all of the molecular rules we may ever discover.

But as you describe in several chapters, there have been some encouraging successes in restoring species and habitats

SC: Yes, and I thought it was very important to tell those stories, to show that even war-torn and devastated places like Gorongosa National park in Mozambique could rebound given time, protection, and the efforts of just a small band of extraordinarily dedicated people.

You visited Gorongosa in the course of writing this book. What was that experience like?

SC: Life-changing. The people behind the Gorongosa Restoration Project are so inspiring, and the magnitude of the recovery in just ten years is astounding and so encouraging. If Gorongosa can be rescued from utter disaster, we should all take heart that we can restore other places and species.

When readers close The Serengeti Rules after finishing it, what do you hope they will be feeling?

SC: First of all, I hope that they feel inspired by the stories of some exceptional people who tackled and solved great mysteries. Second, that they feel enriched with fresh insights into the wonders of life at different scales. Third, that they feel more hope for the future—that there is time to change the road we’re on. And finally, that they can’t wait to tell their friends to read the book!

You have had a very distinguished career as a molecular biologist. What inspired you to delve into ecology and conservation and write this book?

SC: First, a desire to explore the bigger picture of life. When I gazed upon the Serengeti for the first time, I was as enchanted as any tourist, but I did not understand what I was looking at. For someone who has spent decades figuring out how complex, invisible things worked, that was a bit unsettling and embarrassing. So I dove into what was known and realized that the rules of ecology and even how they were discovered had some parallels to what we understood about life at the molecular level. These parallels had never been drawn; this book is an attempt to do that in the context of explaining why understand all of the rules matters. And second, a sense of urgency. The disappearance of nature is an existential crisis for biology and humanity. As much as I love the world of DNA and cells, it felt a contradiction—to care so much about life at one level and to ignore what was happening to life at large. It is time to look up from the microscope.

Sean B. Carroll is an award-winning scientist, writer, educator, and executive producer. He is vice president for science education at the Howard Hughes Medical Institute and the Allan Wilson Professor of Molecular Biology and Genetics at the University of Wisconsin–Madison. He is the author of Endless Forms Most Beautiful, Brave Genius, and Remarkable Creatures, which was a finalist for the National Book Award for nonfiction. His most recent books include The Serengeti Rules and A Series of Fortunate Events. He lives in Chevy Chase, Maryland.