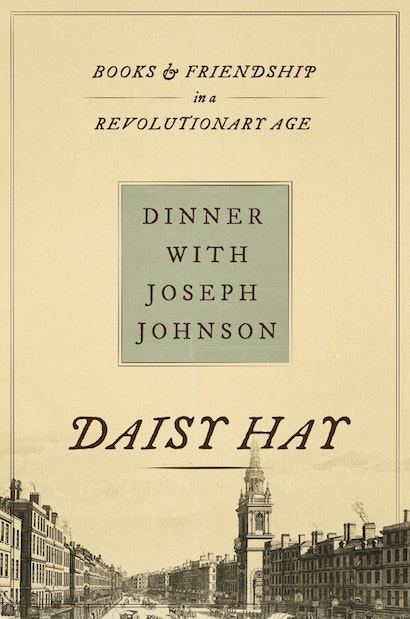 Dinner with Joseph Johnson
Available in 3 editions
Buy This

Once a week, in late eighteenth-century London, writers of contrasting politics and personalities gathered around a dining table. The veal and boiled vegetables may have been unappetising but the company was convivial and the conversation brilliant and unpredictable. The host was Joseph Johnson, publisher and bookseller: a man at the heart of literary life. In this book, Daisy Hay paints a remarkable portrait of a revolutionary age through the connected stories of the men and women who wrote it into being, and whose ideas still influence us today.

Why write a book about Joseph Johnson, someone of whom few people have heard?

DH: Joseph Johnson was an extraordinary man, who brought together an extraordinary range of people. But Dinner with Joseph Johnson is not straightforwardly a biography of him—or even a book about him. Instead it is about the world he created: in this story he is the touchstone who unites an enormous cast of men and women who, between them, wrote into being the enormous political, scientific, literary, artistic and cultural changes that took place in Britain in the final decades of the eighteenth century. The story of Johnson himself is really interesting, because of the way it reflects some of the enormous social changes also underway in the period, but in my book, as in life, Johnson is an enabling figure, whose life gives shape and structure to a cultural history of English literature in the decades surrounding the emergence of Romanticism. Johnson published some of the most significant figures of eighteenth-century life, and at his house in the City of London he brought those figures together, week after week, for dinner.

Who were among his dinner guests?

DH: Johnson’s guests included some individuals who are now as about as famous as it’s possible to be: William Wordsworth, Samuel Taylor Coleridge, William Blake. In his dining room though, the voices of the first generation of Romantic poets weren’t the voices that dominated: Blake came to dinner as a staff-engraver, rather than as a poet, and Wordsworth and Coleridge both appeared as ambitious young men, unknown outside a tiny circle, and jostling for places at table. More famous contemporary figures at dinner included Joseph Priestley, the artist Henry Fuseli, the poet Erasmus Darwin and Benjamin Franklin, who found shelter at Johnson’s before he left Britain for America. Mary Wollstonecraft was a frequent guest, as was the poet and children’s writer Anna Barbauld, whose fame during the years my book covers eclipsed Wollstonecraft. William Godwin became a familiar figure at the table after Wollstonecraft’s death in 1797; in the final years of Johnson’s life he was joined by figures from a younger generation, such as the chemist Humphry Davy and the essayist William Hazlitt.

Can you tell us more about how Johnson’s story intersects with that of Benjamin Franklin?

DH: For much of the period between 1757 and 1775 Franklin lived in London, in lodgings just off the Strand, not far from Johnson’s shop. He was drawn into Johnson’s circle via Johnson’s great friend Joseph Priestley, who shared Franklin’s fascination with the power and potential of electricity. Johnson’s earliest surviving letter was written to Franklin, and was a cover note for manuscripts that Priestley wanted Franklin to check. At the time that the three men were corresponding with each other Franklin was increasingly worried about the actions of the British government towards America, so the refuge offered by the company of sympathetic individuals really mattered to him. Johnson and Priestley were both Unitarians and the experience of religious exclusion made them feel that they had a great deal in common with the beleaguered American Colonists. When Franklin sailed for America in 1775 he left his published work in Johnson’s care, and at the end of the decade Johnson brought out the first British edition of Franklin’s collected works. The day before he set sail Franklin spent the day with Priestley, looking over American newspaper reports of local towns issuing statements in support of the beleaguered citizens of Boston. ‘Dr Franklin has left us’, Priestley wrote a day later. ‘I do not know that he has anything particular in view.  He told me in general that he thought he did no good here, and might do some in America.’

What was the attitude of Johnson and his guests towards the American War of Independence?

DH: Almost without exception, they thought that the actions of the British government brought shame on the country. Johnson’s great friend Theophilus Lindsey, the leading figure in the grown of the Unitarian movement, thought that the only possible outcome was triumph for America and disaster for England. It was an outcome he hoped for, as a patriotic Englishman.  ‘We may all of us have reason to rejoice,’ he wrote, ‘that there will be a place in the globe where Englishmen may be free.’ Many of Johnson’s guests were horrified not just by the betrayal of ideals but by the practical consequences of a nation knowingly blowing up relations with its most valuable trading partner—a story which would, of course, repeat itself in subsequent chapters in British history! Johnson’s guests were also sceptical, though, about America’s claim to be a beacon of liberty: one pamphleteer whose work he published noted sternly that it was the height of hypocrisy for Americans to protest the merits of liberty while simultaneously enslaving their fellow creatures. So the question was a complicated one—a place where questions about religious freedom and the moral imperative of abolition met—but no one among the company at Johnson’s had anything to say in praise of the actions of the British government.

Religion has come up a couple of times: can you explain why it was so important to Johnson and his guests?

DH: Many, although not all, of Johnson’s guests were Dissenters—that is, Christians who worshipped outside the structures of the Church of England. A large subset of those Dissenters were Unitarians, as was Johnson himself: Unitarianism was of course the version of non-conformism that Erasmus Darwin famously characterised as ‘a feather-bed to catch a falling Christian.’ All Dissenters were shut out of public life in Britain in the eighteenth century by two pieces of legislation called the Test and Corporation Acts, which stipulated that only those who were prepared to take an Oath of Allegiance could hold public office or attend England’s two great universities, Oxford and Cambridge. The result was a flourishing Dissenting subculture that sat outside the Establishment, and where worshippers from a variety of different non-conformist traditions were brought together by a sense of shared history and allegiance. Within this Unitarianism was truly a creed for an Enlightened age: Priestley and Lindsey held that it was the God-given responsibility of every man and women to seek knowledge and to enquire about the boundaries of the known universe, as an act of faith. In this world view, the veins and sinews on the back of a human hand were as beautiful a sign of the mysteries of God as any Church-sanctioned law: knowledge and faith were not oppositional, but part of the same way of thinking. This was enormously important for Johnson’s guests, because it gave them a creed around which they could unite, as well as a sense of shared exclusion from the institutions of state.

What was the most surprising thing you learned while working on Dinner with Joseph Johnson?

DH: I think that the giants of Johnson’s world—Priestley, Fuseli, the poet William Cowper, Erasmus Darwin—were not the men and women who posterity subsequently decided to be important. That realisation allowed me to build a picture of his world that felt much truer to the world I saw in my sources, and meant I wasn’t dazzled by the light of posthumous fame.  The other thing that was continually surprising was the way in which the central concerns of Johnson and his writers mirrored the things that concern us—or should concern us—as a society today. In his dining room and in the works he published he created a space for new ideas to emerge about childhood, the position of women, religious freedom, science, medicine, America, Europe, poetry and domestic and international politics. In actions rather than words he demonstrated the power of kindness and community to challenge systems of social control founded on separateness and division. He worked for a world in which children are recognised as reasonable creatures, entitled to an education and a childhood; and in which professional women are unconstrained by reactionary vitriol. He celebrated a vision of the nation as more than its politics; he gave space to poets and artists who found new ways of seeing and to scientistic and doctors who saw beauty in new forms of knowledge. He leaves us all this in the conversations he created and the books he made, and I found it immensely encouraging, for a period, to see the world through the lens of his life.

Daisy Hay is an award-winning biographer whose previous books include Young Romantics: The Shelleys, Byron and Other Tangled Lives and Mr. and Mrs. Disraeli: A Strange Romance. She is associate professor of English literature and life writing at the University of Exeter.