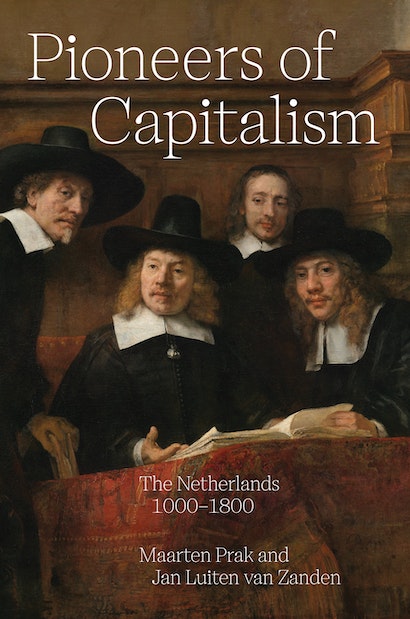 Pioneers of Capitalism
Available in 2 editions
Buy This

The capitalist economic system has delivered wealth to the world population on an unprecedented scale. At the same time, many people feel unhappy about how little the economy does for them. Inequality is increasing, within and between countries, with visible effects on health, education, safety and living standards of the average world citizen—not to mention its impact on the environment. Can humanity do better? In the past, communism presented an alternative, but since the collapse of the Soviet Union in Europe and China’s economic transformation, this alternative has turned into a pipe dream. Improvements must come from within the capitalist framework. Perhaps history can teach us something about forms of capitalism that produced better outcomes for a larger share of the population? We argue that the Dutch Golden Age demonstrates how institutional safeguards—not necessarily coming from the state—could do so. It also demonstrates how things could go horribly wrong in the absence of such safeguards.

In 1000 CE, the Netherlands did not exist as a country, and the region played a marginal role in Europe, located as it was on the borderline between a feudal area to the south and “free” peasant republics in the north. Miraculously, it developed into a pioneer of capitalism during the 14th and 15th centuries. The transformation was largely due to an environmental crisis in the western part of the country, where rising water levels increasingly forced farmers to abandon grain in favor of cattle. This entailed a strong commercialization of the countryside, especially in the County of Holland. The economic changes led to an increase of both wage labor and market transactions. Crucially, this happened in an environment of weak political structures. Rather than being an obstacle of growth, feudalism turned out to be its incubator, preparing the way for the emergence of such “republican” institutions as communes, urban craft guilds, or rural drainage boards. These became the countervailing powers to keep rampant markets in check.

After the Dutch Republic was established as an independent country during the Dutch Revolt (1568-1609-1648), such institutional checks and balances managed to limit socio-political inequality: high wages, the absence of indigenous slavery, comparatively “equal” gender relations, and religious tolerance—these were all features of Dutch society precisely when it was emerging as the world’s richest country and a leader of the first round of economic globalization. Perhaps even more remarkably, this capitalism was also constrained by the very social class—the merchants, the rulers of the major cities—that were in control. The ruling class, aware of its own vulnerability, was keen to maintain domestic stability. The Dutch Golden Age may have been exceptional, but prosperity in The Netherlands proved long-lasting.

However, while Dutch capitalism was showing a friendly face at home, it turned violent abroad. The Dutch were not merely trading on the world stage but also fighting. The Dutch Republic maintained one of Europe’s largest armies during most of its Golden Age and a huge navy as well. The country was almost permanently at war, in Europe but also in Asia, Africa, and the Americas. Especially outside Europe, military violence was used deliberately as an instrument to expand the business of its two colonial companies, the Dutch East India and West India Companies, trading as VOC and WIC respectively. They helped establish a colonial empire in Indonesia, South Africa, Latin America and the Caribbean that survived well into the 20th century and—in some minor parts—even today. In the territories under Dutch rule, slavery was widespread, and the Dutch were, moreover, significantly engaged in the European trafficking of human beings. These activities became even more noteworthy during the 18th century after the Golden Age had come to an end. While there is a risk of over-estimating their impact on the prosperity of the country during the 17th century, there can be no doubt that without the constraints of civic organizations, Dutch capitalism proved as brutal as any other.

With today’s Dutch government on the brink of offering a formal apology for the role of its predecessors in slavery, and a significant minority of its population descending from its victims, the legacy of the Dutch Golden Age is still acutely felt and has, in fact, become a topic of national soul searching. The applicability of the term “Golden Age” itself has been called into question. At the same time, Dutch museums continue to present their treasures from the period under this label. It all goes to show that this is a history that is alive and kicking. This is also true for its institutional legacy. Dutch capitalist relations today are managed by a dense network of forums where “capital” and “labor” meet with government representatives to hammer out not just reform agendas but also deals about wages, pensions, or job security. The Netherlands has a remarkably low number of strikes and a substantial public sector, much of it managed by charities and foundations. Dutch men and women are among the tallest in world, suggesting high average levels of welfare, and their children report the greatest satisfaction in the world. It suggests that the Dutch model of “capitalism constrained by civic institutions,” known in The Netherlands as “poldermodel,” remains a working formula. At the same time, the former colonies created in the 17th century struggle with the legacy of the extractive institutions imposed in that period. Dutch capitalism was at the origin of the “Great Divergence” that is such a salient feature of the world economy until this very moment.