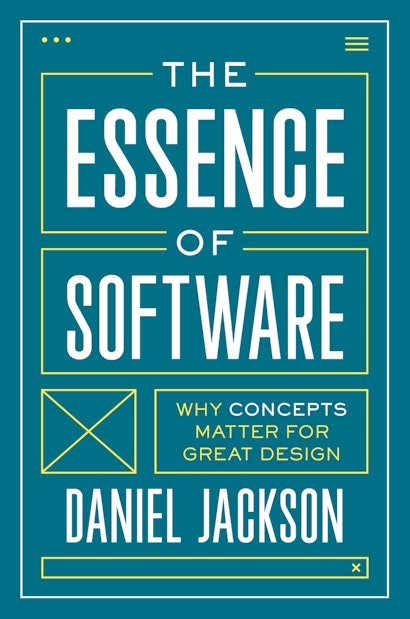 The Essence of Software
Available in 3 editions
Buy This

As our dependence on technology increases, the design of software matters more than ever before. Why then is so much software flawed? Why hasn’t there been a systematic and scalable way to create software that is easy to use, robust, and secure?

Examining these issues in depth, The Essence of Software introduces a theory of software design that gives new answers to old questions. Daniel Jackson explains that a software system should be viewed as a collection of interacting concepts, breaking the functionality into manageable parts and providing a new framework for thinking about design. Through this radical and original perspective, Jackson lays out a practical and coherent path, accessible to anyone—from strategist and marketer to UX designer, architect, or programmer—for making software that is empowering, dependable, and a delight to use.

What inspired you to write this book?

DJ: As a user of software, I’d always found it fascinating that some apps were so good,and others so bad. Even within one company’s products, you come across one app that just seems so right in every respect, and another that’s falling apart at the seams. I’d been a computer scientist for 25 years, and I decided that the time had come to apply everything I’d learned to figuring out what was going on, in the hope that I could find a way to get things right.

How long did that take, and what did you find?

DJ: It’s been almost 9 years to the day since I submitted a proposal to the National Science Foundation for a project to explore the idea that concepts were the essence of software design, claiming that if we could figure out what they were, we would be able to improve our software greatly. The reviewers said that “the proposal does not provide a sufficiently detailed plan for the panel to assess the possibility for success” and duly rejected it. It wasn’t an unreasonable criticism. I really had no idea where this project would go.

So I spent the next nine years taking careful notes every time an app did something confusing or wrong, and slowly but surely building a theory that could explain all these flaws. My book presents a sample of the best of these flaws—the most illuminating and occasionally amusing—and I was amazed to find (counting the entries in the index of apps recently) that 100 apps are mentioned.

What is this theory?

DJ: In short, it’s a way to think about any software product, from the smallest app to the largest system, as a combination of “concepts.” People in computing have talked about concepts seemingly forever. Fred Brooks, in Mythical Man Month, says that conceptual integrity is the key to success in software development. And the whole field of usability rests on the idea that the user’s conceptual model should match the designer’s model. But nobody had ever tried to figure out what a concept is (in the context of software apps, at least), or what it means to have conceptual integrity.

So what is a concept?

DJ: First, let me say what it isn’t. There are lots of contenders for concepts in computer science, such as abstract data types, classes, objects, concept lattices, entities, and so on. But I couldn’t make any of these work. In short, I discovered that a concept is really a little behavioral protocol. Think of the real-world concept of a restaurant reservation. If you had to explain that to a Martian (who we’ll suppose already knows what a restaurant is), you wouldn’t talk about structural relationships or classifications. You’d say something like: it’s to make sure that when you turn up at the restaurant, they have a table for you, and the way it works is that you call in advance and agree on a time and then later turn up at that time. This explanation has two key parts: a purpose (explaining what a reservation is for), and an operational principle (explaining the basic behavioral pattern). In my book, I show how this framework can be used to identify and define as concepts all the kinds of functionality that arise in software.

Is this philosophical or practical?

DJ: My goal was primarily to develop an approach that can be readily applied, so it’s very practical. Every idea in the book is introduced with a practical example, and there are practical lessons highlighted throughout. It’s also a bit philosophical, because if we want to make radically better software, we need to think about it differently too. Don’t worry though; I’ve relegated the more cerebral discussions to the endnotes, along with some anecdotes that were a bit too long to include in the body, and a bunch of other fun things, including the recipe for my favorite pasta sauce.

How does this help you design better software?

DJ: First, it gives a new framing, so you can organize your design and think about it with greater clarity. Second, the theory includes a collection of design principles that you can apply to help you discover problems early on—problems that you might not have found in user testing but which could turn out to be very serious. And third, concepts help you realize when you’re reinventing the wheel, by capturing established design ideas in reusable form.

How is concept-design related to design thinking?

None of this is software specific, and it’s not clear how to apply it to a big software problem. You can’t ideate effectively about an electronic health record system or even a moderately complex app. To apply design thinking to software, you first need some way to break the problem into pieces that can you can think about independently. That’s one respect in which concept design fits in.

Another is that design thinking doesn’t have much to say about reusing design ideas, even though (of course) the best designers do it all the time. Concept design gives you a framework for encapsulating existing design ideas and finding opportunities to reuse them. Imagine, for example, designing a new social media app. You might not want to reinvent standard concepts like “post,” “comment,” “like,” “karma,” and so on. With concepts, you can include those in your design as well-understood components, freeing your creativity up to invent new concepts (and find novel ways to assemble old concepts together).

Have you read Don Norman’s “Design of Everyday Things”?

DJ: It’s a wonderful book and was a major inspiration. I modeled my book on it in several respects, especially in the way I use examples to drive the discussion, and in casting the contribution as a simple theory. In some ways, my book is an attempt to do for software what Don Norman did for physical things (especially doors!). In his design theory, there is a key assumption that the actions that users perform have immediate effects: you pull the door and it opens; you flick the switch and light goes on; etc. His central idea of affordance builds on this assumption: namely that each control should signal the effect it has to the user. As software has become more complex, however, most of the effects of user actions are only felt much later. For this reason, I believed that a different kind of theory was needed that could explain the chain of events connecting the user’s action (tagging a photo in Facebook, for example) to an outcome that the user might not see immediately (making the photo visible to a much enlarged group of users).

Does concept design impact how code is written?

DJ: Yes, because it offers a much more refined kind of modularity. The implementation of a concept can be thought as what programmers call a “service,” but concepts are smaller than traditional services, even than microservices, so I like to call them “nanoservices.”

In my book, almost all the examples are drawn from apps built by the companies that produce the best software, (Apple, Dropbox, Facebook, Google, Microsoft, etc), because I didn’t want people to say I was picking soft targets. Focusing on these apps also allowed me to check that the flaws I identified really mattered. When I found a flaw in my investigations, I would scour the web to find reports from users, and inevitably came across sad stories about how the flaw had led to some irreparable harm. In one of the examples I discuss in the book, a user was so upset that he registered a domain name protesting the app’s failings.

But the lessons of the book are even more applicable to the software produced by companies that have less experience and fewer resources. This kind of software has fewer users than apps like Gmail, but sometimes it matters even more. Most companies rely on enterprise software, for example, that is of much lower quality, and medical devices (whose failures causes tens of thousands of deaths every year) are often rife with design flaws. In general, the software that runs in consumer appliances (cars, cameras, ovens, printers, etc) is not yet built to the standard of the best commercial software, and I believe could benefit greatly from the ideas in this book.

What’s your favorite example of a concept?

DJ: I think it would have to be the trash concept. I feel a bit nostalgic about it, because it was the first concept I identified and described carefully. It has a long and noble history, being the very emblem of the Apple Macintosh and its usability from its earliest days, and it was central to a major court case between Apple and Microsoft. The idea of the trash concept was so good that it’s now become ubiquitous, and appears in many applications and desktop file managers.

The way in which the trash is treated as a folder in the Macintosh is an example of what I call “synergy,” which I explain in the book harder to achieve than it seems, and still shows some rough edges. In fact, the trash is a great example of a concept that has evolved over a long period of time. Even in the last couple of updates of macOS, there have been changes that have resolved some longstanding issues. And a few still remain: it is possible, for example, to empty the trash and find that no storage space is reclaimed at all, even if the trash previously contained some huge files (see note 73!). In summary, the trash exemplifies for me how far we’ve come and how far we still have to go.

Daniel Jackson is professor of computer science at the Massachusetts Institute of Technology, and an associate director of the MIT Computer Science and Artificial Intelligence Laboratory. He is the author of Software Abstractions and Portraits of Resilience.