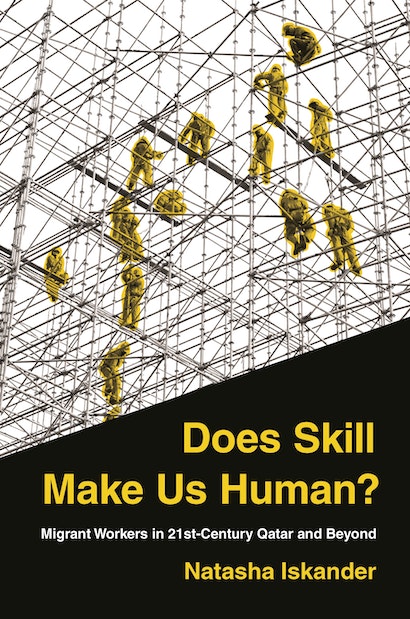 Does Skill Make Us Human?
Available in 3 editions
Buy This

On the shoreline of Doha, Qatar, a tacky countdown clock, an enormous fuchsia hourglass cast in acrylic and sponsored by the luxury watchmaker Hublot, flashes the days, minutes, and seconds until the first ball of the 2022 FIFA World Cup is kicked at 6pm on November 21, 2022. As the lighted numbers on the belly of hourglass drop, the excitement for the games builds. Qualifying matches are being held around the world in advance of the final draw on April 1 when the schedule for the 32 winning teams will be set. Travel agents are booking package tours for the games and already raising alarms are the acute shortage of hotel rooms in Doha, a gap that Qatar promises to fill with cruise ships docked in its bay. International soccer stars like David Beckham have started their multi-million-dollar promotional tours as ambassadors for the games and for Qatar. The anticipation for the World Cup—the tournament when the beautiful game is at its most glorious—swells by the minute.

Meanwhile, as the Hublot clock counts down, human rights organizations and worker advocates have renewed their calls for attention to the human cost of the games. They have amplified campaigns documenting the abuses and exploitation endured by migrant workers who built the eight hyper-designed stadiums for the cup. They have made it clear that no amount of sportwashing can erase the thousands of worker death and injuries produced by an employment system—called kafala—that for most of the decade between the 2010 ceremony in Zurich when Qatar was awarded hosting rights and the dramatic sound and light show on Doha’s corniche when the countdown clock was unveiled this past November enforced practices that many compared to slavery. They point to the widespread wage theft, forced overtime, abysmal living conditions, passport confiscation, and everyday abuse that the migrants from Asia and Africa building the World Cup still experience despite reforms to the kafala system that bound workers to their employers.

But nowhere between the crescendoing fanfare about 2022 World Cup and the insistent calls for the games to be moved to host country that did not sacrifice the lives of migrant workers to the construction of sports venues is the story that I encountered during my research on working conditions in Qatar.

In 2011, I began a multi-year project to document labor practices on Qatari construction sites and to understand what had produced them. I spent hundreds and hundreds of hours on projects sites, shadowing workers as they climbed scaffolds, poured concrete into gravity-defying arabesques, welded together the steel skeletons of stadiums, and installed glass panels to assemble the skin of the buildings they built. I interviewed workers on-site and at their labor camps, and I asked them about their jobs. I asked them what ground them down, what broke their hearts, but also what inspired them and gave them purpose. I asked their supervisors, their employers, the architects that designed the buildings and the government officials that commissioned them many of the same questions.

What I found was a story with far more dimension that the flat and indistinguishable portrayals of workers—anonymous, oppressed, racialized, and clad in ubiquitous work overalls—in much of the press on Qatar as well as in some human rights accounts. What I found was a story of astounding everyday creativity, of profound connection, and of deep resilience. What I found made it impossible for me to see the stadiums, cultural institutions, and other infrastructure for the games as anything other than material forms of witness to the heroic, masterful, and collaborative efforts of the workers who built them.

On one site I studied, the scaffolders called themselves the “the men who hang from the sky.” And indeed they did. They built scaffolds higher than any other attempted anywhere in the world, scaffolds that were literally unimaginable to everyone, including the architects and engineers who commissioned them, until they were built. As they assembled the complex and towering honeycombs of planks and tubes, they had to hang from the edge of the structure, perched on pipes four inches in diameter fastened at one end to the scaffold’s edge dozens of stories up in the air, balancing on the balls of their work-boot clad feet as they handled heavy material, with only sky below them. Prince, the scaffolder from Ghana who explained the moniker to me—and who described scaffolding as his destiny—would have handled more than a ton of material that day, hauling 6 meter-scaffolding pipes, thick wooden planks, metal joints, gravelocks, and clamps up a network of temporary stairs and ladders. Each time he handed a pipe to his coworkers, he would have twisted the pipe twice counterclockwise and waited for a double twist in response from his colleague signaling a tight grip before letting go. It was impossibly loud up in the scaffold: the desert winds whipped through the structure and temporary tarps flapped violently; machines and cranes whined and roared; materials banging each other clanged and cracked. The detailed sign-language that scaffolders developed—gestures for hand-offs, gestures for safety checks, gestures for starting and stopping—was the only way to communicate.

Construction projects in Qatar depended utterly on the skill of migrant workers like Prince to translate fantastical designs into built structures. But the vast majority of migrant workers arrived in Qatar with minimal construction experience, if any. As a result, the project sites acted as massive training systems, in which workers on-site trained new arrivals. When I asked Prince’s co-worker Sandeep from Nepal about the training process for the hundreds of migrants who arrived every month, he answered, “you must teach him with love.” I found the intensive practices of teaching and learning that ran through every single work activity remarkable for their friendliness and care. Workers called each other “uncle” and “nephew,” “big brother” and “little brother” in an invented web of kinship that reflected the social connections they were building through training.

These relations of care were critical to workers’ survival. They watched out for each other on-site. Atop scaffolds and in foundation digs, they watched for the disorientation and distractedness that were early signs of heat stress, a life-threatening danger in Qatar extreme heat. If a worker was struggling, they stopped and cared for him: they sat him down, shared their water, took over his tasks, and kept watch for the symptoms indicating that the heat injury had become severe. The debate about how many workers have died in Qatar due to heat injury has been pitched, with international observers claiming the number has exceeded 6,500 and the Qatari government has pushing back with claims that the death toll from accidental injury has been in the single digits. While the numbers are contested, what is certain is that many more workers—thousands more—would have died had it not been for the care, solidarity, and expertise of their “uncles” or “brothers” on site.

I wish I could go to Qatar now and see the buildings finished by the workers I came to appreciate so deeply. I even wish I could go and see the countdown clock and feel the excitement as the numbers blinked lower. But the story I tell in my book—Does Skill Make Us Human? Migrant Workers in 21st Century Qatar and Beyond—is not just missing from the global debates about Qatar. Narratives, like the one in my book, that represent resilience, initiative, and care of workers—that represent their full humanity—are politically charged in Qatar. My research was cut short when the confidentiality of the participants in the projects, the protection of my research team, and my own safety was threatened. I left Qatar unplanned in late 2014, and with the government of Qatar still detaining journalists who seek to document the working conditions that migrant workers experience, I have not felt comfortable returning. So, for now, I watch the coverage of the countdown clock from laptop. In following the press coverage of the lead up to the World Cup, I marvel at the buildings workers have built. And when I watch the games this coming November, I will be riveted not just by the beautiful game but by the beautiful stadiums that migrant workers made possible through thousands upon thousands of moments of ingenuity, care, and dedication.

In Qatar’s glittery World Cup, the poor toil for the thrill of the rich
Opinion by Natasha Iskander