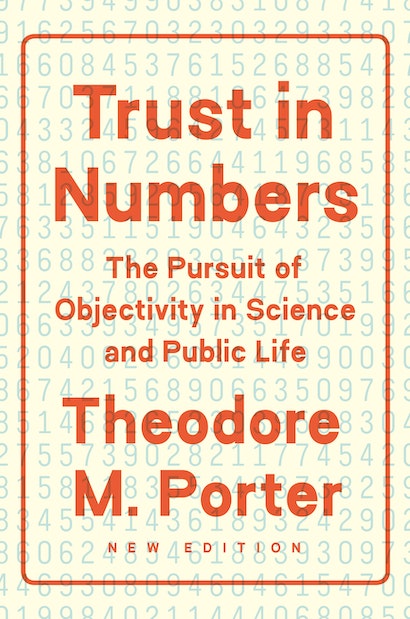 Trust in Numbers
Available in 2 editions
Buy This

Democracy depends on numbers. This has been recognized since the founding of the American republic. The US Constitution defined terms for periodic elections and for the reapportionment of representatives among the states as their populations grew. Unfortunately, not all terms were commendable. The new republic was made half slave and half free by design, in a manner as absurd as it was shameful and degrading. Black slaves, who of course did not vote, were each valued as three fifths of a person in the electoral calculus. In other respects the founders insisted on political equality, implying a need for a periodic census as the basis for redistributing political power: one man, one vote.

Counting millions of people can never be straightforward, and the mechanisms for tallying and classifying populations have provoked bitter controversy. The present occupant of the White House has done everything he can to debase American numbers. This is consistent with his purposeful cultivation of ignorance on scientific questions of all kinds, even to the point of undercutting the findings of his own expert agencies on the urgent matter of COVID-19. His denial of inconvenient scientific findings such as anthropogenic climate change sustains a shameful Republican tradition, and is consistent with his unwillingness to acknowledge the human costs of energy policies. Trump’s remaining voters evidently don’t care. He publicly announced his strategy to improve COVID statistics with number games, not by encouraging behaviors that would reduce contagion, but by reducing testing so that new infections will remain invisible for longer.

The Republican war on accurate numbers is an old story, made worse by Trump. For decades, professionals in the US Census Bureau have been almost unanimous in supporting the use of probability sampling to facilitate a more accurate tally of undercounted populations—the millions of persons, many of them young, poor, or minority, who cannot be found and recorded by name. Objections to sampling emphasize the language of the Constitution, which calls for a census and says nothing about random sampling (although it  is also silent on electronic computer and even mailed-out forms!) Republicans, in fact, oppose the improved accuracy that focused sampling allows.

A perfect census is impossible. Census numbers necessarily depend on how much effort has been made to identify the uncounted. Political opponents of sampling have shown no interest in providing the funds that would be required to reach the same level of accuracy as can be achieved with probability sampling. Far from it! The Trump administration has labored untiringly to increase the undercount for the sake of political advantage. And it may at last have succeeded. Their first scheme, involving a question on citizenship designed to scare recent immigrants, went all the way to the Supreme Court, where it was rejected. A few days ago, however, the Supreme Court permitted the Commerce Secretary to undermine its accuracy by terminating the 2020 census months before the work could be finished in this time of pandemic. The incentive, as is thoroughly documented in the recent reporting in the New York Times (13-14 October), was to leave Trump in control of reports incorporating inaccuracies that favor the political and economic interest of Republicans. All this is of a piece with the extreme gerrymandering now practiced by Republicans, even as Democratic voters have largely abandoned it in the name of good government.

It is shocking to see our highest court joining forces with such politicized cultivation of inaccuracy. And yet it gets worse.

The most alarming recent development in the political numbers game involves elections. As the polls show an increasing advantage for Biden in the most crucial states, Trump has become ever more shrill in his efforts to discredit in advance this historic election. There is a fundamental principle at stake here. If we refuse to put faith in election results to choose a president, we are giving up on democracy. In defiance of arithmetic and of political order, Trump tells us to put faith in ungrounded claims of rampant illegal voting. He has repeatedly refused to promise to respect the electoral outcome. Meanwhile, he openly encourages malicious and illegal tricks such as the placement of deceptive, illegal ballot containers in California.

Plainly, Trump’s lies about voting are potentially the most dangerous lies of all. Without trusted numbers, there can be no democracy. A range of scenarios have been described for what amounts to a political takeover. The attack on fair elections has already begun with measures designed to remove voters, especially minorities, from the voter rolls and to close down convenient polling places. It appeared for a time that Trump might eliminate the US Postal Service in his war on voting by mail. He now proposes stationing threatening “observers” at selected locations to intimidate minority voters.

It appears unlikely at this moment that even measures like these, however alarming, can suffice to give Trump an electoral majority. But it might be possible, by systematically challenging vote counts in Democratic areas of some key states to delay the count sufficiently that Trump may appear for weeks or even months to have a lead. What then?

We cannot forget that there is a precedent from just two decades ago. Republicans in 2000 probably did not have a strategy in advance for disrupting a recount. But as the Florida vote evolved to a razor-thin margin of difference, Republican obstructers swung into action, thundering through the halls of the Miami courthouse to intimidate election officials.

The makeshift methods of 2000 could only succeed because the vote difference between Gore and Bush was so remarkably narrow. This time, Trump’s party is planning ahead to pursue their manipulations on a much larger scale. If, once again, they can delay a conclusive count into December, with tens or hundreds of thousands of votes in key states still uncounted, and with Trump calling these votes illegitimate and noisily declaring victory, what will happen then?

In 2000, with the vote in Florida so close, and especially given all the problems with the electoral machinery, the results pushed up against the limits of precision. Still, the procedures for a recount were clear enough. Counts on such a large scale are not settled by machines alone, but must earn our trust with clear procedures of enumeration, carried out by competent workers who can be observed. It could have proceeded that way.

But in 2000, the Supreme Court of the United States implicitly sanctioned the illegal courthouse disruptions by cutting off the Florida recount. A Republican-dominated Supreme Court decided to spare the citizenry the uncertainty of letting vote numbers determine the outcome, and reduced the problem of enumeration to one for which perfect precision was possible. The vote that counted was 5 to 4, following strict party lines, and every other American was disenfranchised.

Trump is now emphasizing the need for quick approval of his nominee so that the Court can intervene to correct an undesirable vote. His nominee for the Supreme Court has been silent on this point.

Theodore M. Porter is Distinguished Professor of History at the University of California, Los Angeles. His books include The Rise of Statistical Thinking and Genetics in the Madhouse (both Princeton).