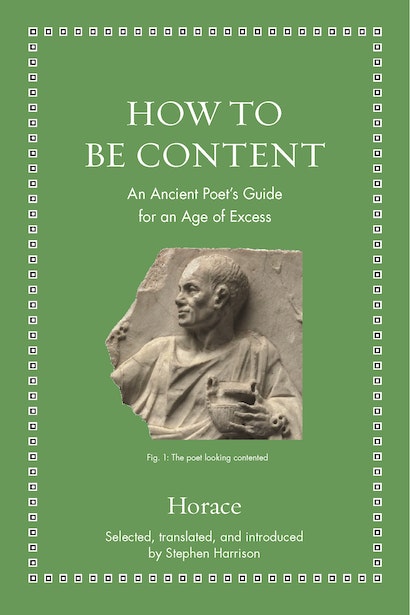 How to Be Content
Available in 2 editions
Buy This

The poet Horace (65-8 BCE) is one of the most celebrated writers of Latin literature. His work has been copied and preserved over the centuries for both its sparkling form and its enlightened content. In his slave-owning, chauvinistic, imperialistic and often brutal society of ancient Rome, he nonetheless engaged instructively with issues which we still see as crucial for contentment in today’s world: how to avoid stress and excess in an age of anxieties and extremes; how to live a rational and moderate life in the midst of artificial excitements and unthinking over-consumption; how to achieve and maintain true affection and friendship; and how to face distress and death with appropriate courage and patience.

These questions speak especially clearly to us in the twenty-first century, where the forces of external prosperity and adversity are both in considerable tension with the inner life of mental contentment: both empty indulgence in material excess and the possibility of the rapid dissolution of worldly comforts are real dangers to our fundamental well-being in these ecologically extravagant and markedly unstable times.

Both Horace’s brilliant framings of these perennial problems of human existence and his thoughtful solutions to them have palpable value two thousand years later. His beautifully-crafted Latin verses set his practically wise content in a jewelled framework of artful and memorable expression which has been widely admired: as he himself said: ‘The writer who mixes the useful and the pleasant gets every vote / by delighting and instructing the reader at the same time’ (Ars Poetica). This volume of Latin extracts with translation and commentary sets out not only to bring across to a modern readership the poet’s distinctive and durable guidance on contentment and the good life, but also to suggest in an English version something of his splendid Latin style.

Horace consistently advocates being content with one’s lot in life, being satisfied with a small sufficiency of possessions, and not worrying about what the future may bring. These are presented as the key strategies to combat mental distress in the anxious and acquisitive society of ancient Rome, and as the prime routes to the inner contentment which was the central goal of most of the important philosophies of the poet’s own time. These precepts are again strikingly contemporary, particularly so in this time of pandemic, which has induced many to recalibrate their personal values in a less material mode. Horace’s injunctions to be mindful and savour the joy of the present moment as a strategy for mental peace seems especially relevant now: ‘as we speak, time the envious / Flees away. Harvest the present day [carpe diem], trust minimally in the next’ (Odes 1.11).

Friendship is a key topic in Horace’s poetry, where it is seen as one of the main supports for contentment. Here he raises some central and delicate issues which once more have a very contemporary resonance: how to deal effectively with those who are both chosen personal intimates and vital economic or professional associates; why we should be tolerant of our friends’ foibles; how to support friends in their times of stress and adversity (or pandemic); and the role of friends in the life of retirement (or unusual isolation). His advice and example here are clear and effective: ‘in my right mind I would regard nothing as matching a pleasing friend’ (Satires 1.5).

The central importance of peace of mind and moderation in Horace’s approach to the good life means that his poetry consistently takes a negative view of excessive emotions, which are seen as damaging to the human psyche. Horace recommends that contentment comes from being balanced and serene rather than temperamental and intense. Again this is good advice in our world of easy passions and thoughtless adversarialism: ‘be sure to keep a level mind in steep times /And likewise one that is restrained /From excessive joy in good times’ (Odes 2.3).

The prospect of death was always closer in the Roman world than now; the lack of most modern therapies made the end of life a much more real and immediate prospect. In our time of a vaccineless virus, the poems which confront our own vulnerability and transience are amongst the most relevant of Horace’s works. As our recent experience stresses, disease and death are still indelible human facts, and Horace’s poetry, with its stress on life’s insecurity and brevity and the consequent need for presentism and equanimity, retains its therapeutic impact. It can help us generate the appropriate frame of mind to contemplate the prospect of our own frailty and to be grateful for what we have: ‘amid your hopes and cares, amid your fears and passions, /Believe every day that dawns your last; / Sweet is the hour that comes that’s not expected’ (Epistles 1.4).

Stephen Harrison is Professor of Latin Literature at the University of Oxford, where he is also a fellow of Corpus Christi College. His books include The Cambridge Companion to Horace. He lives in Oxford.