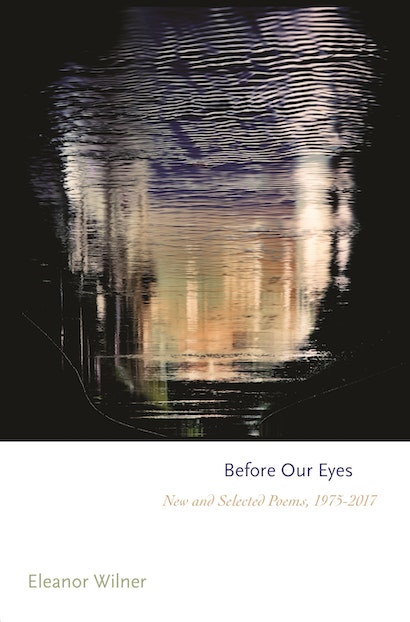 Before Our Eyes
Available in 3 editions
Buy This

Before Our Eyes gathers more than thirty new poems by Eleanor Wilner, along with representative selections from her seven previous books, to present a major overview of her distinguished body of work. A poet who engages with history in lyrical language, Wilner creates worlds that reflect on and illuminate the actual one, drawing on the power of communal myth and memory to transform them into agents of change.

You had a long, storied career—and you’ve just won the Frost Medal this spring! How does it feel to be publishing a collection of poems that is partially a retrospective of your work?

EW: I think I would put it somewhat differently.  That I’ve had a long and fortunate life, darkened by history but illuminated the whole way by poetry. And by the friends it has brought me.  I’d say, too, that this collection of poems is largely a retrospective—most of it comprises poems from the seven books that preceded this one.  I looked in the mirror (ouch) and at the actuarial tables, and decided that it was time to do my own selection from past work, along with what I’ve been writing in the recent ugly shadow of national misrule.  I have never dwelt in the past, so it feels good to have this work of many years in a book, providing the kind of closure that invites me to imaginatively move forward.  I am grateful to poetry editor Susan Stewart and Princeton Press for materializing that intention.

How would you say that your writing style has changed over the years?

EW: I am not sure that I am the best, or even a good judge of that.  What I know is that I protected my poetry’s development by keeping it to myself for years; I was 42 when my first book was published, so by then I’d found a lyric line that seemed to invite the poetic imagination.  My interest in change has not been in style, but in substance; the way our present situation and knowledge, whatever one’s tradition, requires that we alter the ruling myths and transpersonal figures we collectively inherit, respecting their power in order to use it to change their meaning. The imagination is inherently subversive because it simply refuses to see the world through the eyes of those who think they control it.

Over the years, as times change (and I do), the same images don’t recur so much as reappear transformed.  For instance, the old Greek story of the Labyrinth, and figures from it, especially the Minotaur, Daedalus and Icarus, serve quite different imaginative uses in “Labyrinth” (1984),  “Voices from the Labyrinth” (2010), and in the new poems: “Daedalus, the Exile, Thinks of His Son,” and “Wingspan” (2019).

Also I notice that an image stream of nonhuman animals emerging in new mythic shapes has been growing stronger with the years—the oldest gods, but now with a post-Darwinian claim to kinship and guidance in the natural world where we have lost our way.

You play around with form in this collection.  I’m thinking of the title poem, “Before Our Eyes,” and how it appears on the page as a sail. How do you decide which form a poem should take?

EW: Actually, it is the poem that decides.  Poems are oddly like seeds that contain their own form, and as they grow, the form emerges.  As an example, the title poem that you mention, “Before Our Eyes” began in a renshi, a poem chain with friends Rose Auslander and Kim Hamilton whose one rule is that the poem’s title be taken from the last line of the preceding poem.  Kim’s last line was “nature dying before our eyes,” giving me both the poem’s (later shortened) title and initiating subject, so the shape with its lengthening lines came from the incremental proliferation of all that dying.  By the time I got to the poor sloth, I was having a great time, the avalanche of loss had become comical, and the final line had clearly reached a dead end.  When the imagination hits a cul-de-sac, it makes a hair-pin turn toward possibility; the reversal of meaning dictated the reversal of line length as the poem in its reflection sailed toward dawn.  And it was the happiest of accidents that the sail appears as the poem’s visual form on the page.

Which poets/writers have inspired you?

EW: My original teachers were the Great Dead: Homer, Euripides, Shakespeare, Yeats, Proust, Lorca… the usual suspects.  And they are great teachers, partly because they are dead.   But the other source of inspiration, equal in power, for so many of us, is what I think of as The Great Silence—all those women’s voices, and the voices of the anonymous, those who were never heard.  The many who didn’t “make history,” but suffered it.  Whose literature did not exist.  And that millennial Silence is alive, eloquent with suppressed expression…those voices rise now from their enforced silence through the ages; they demand to be heard; they carry a different vision; they speak through us who listen, and they change our eyes—both what we saw and, with that, what we can see.  As Blake said: “the eye altering, alters all.”

Is there a particular line from a poem you’ve written that stands out in your mind?

EW: Well, I think I’d choose the one that happens to close the book:

—you no longer know

the trail you take

from the one that you are making as you go.

Eleanor Wilner is the author of seven previous collections of poetry, most recently Tourist in Hell and The Girl with Bees in Her Hair. In 2019, she received the Frost Medal for distinguished lifetime achievement in poetry, the highest award presented by the Poetry Society of America. Her other awards include the Juniper Prize, three Pushcart Prizes, and a fellowship from the MacArthur Foundation, and her work appears in many anthologies, including The Best American Poetry. She teaches in the MFA Program for Writers at Warren Wilson College and lives in Philadelphia.